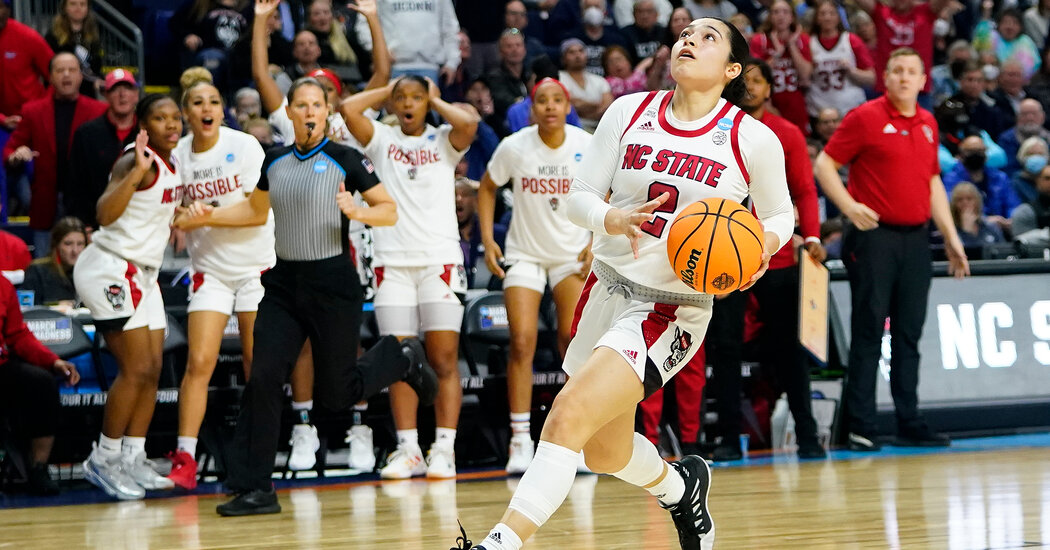 BRIDGEPORT, Conn. — Raina Perez, a North Carolina State guard, charged toward the basket and glanced behind her, her eyes searching for the kind of Saturday afternoon chaos she had just started back at midcourt.

But with no one all that near, the aftermath of that moment — an electrifying steal with her team, the Bridgeport region’s top seed, trailing Notre Dame with less than 20 seconds to play — was nearly certain: Perez would score on a layup and single -handedly renew NC State’s ambition to return to the round of 8 for the first time since 1998.

She later added a pair of free throws to push the score to 66-63 and stun a fifth-seeded Notre Dame that had led for nearly 32 minutes and largely stifled one of women’s basketball’s most prolific offenses.

For much of the afternoon, in fact, NC State’s offense teetered toward the hapless by its extraordinary standards. Although the Wolfpack cultivated a 4-point lead to end the first quarter, they had squandered it by halftime, when they trailed, 38-30.

They had made 13 of their 34 field goal tries. Only two of their 11 3-point attempts had fallen through. They had, at least, managed to sink two free throws.

Olivia Miles, a freshman guard for Notre Dame, had already amassed 15 points by then. Dara Mabrey, the guard who would later be Perez’s late-game victim, already had 9.

In the locker room at Total Mortgage Arena, Elissa Cunane, the NC State center, worried that her team was not mustering the kind of toughness the day required.

Even as NC State stiffened after the intermission and narrowly started to outscore the Irish, Notre Dame entered the fourth with a 7-point advantage. Wes Moore, the Wolfpack coach, was relegated to standing on the sideline a minute into the fourth and hollering a primal plea: “We need to score! We need to score!”

His exhortation, simplistic as it was, reflected the lateness of the hour, how there was only so much time for NC State to dodge the kind of March letdown that has teetered toward ritualistic for the program from Raleigh. Simple, though, can be rather formidable in tournament play.

Jada Boyd unleashed a jumper. The margin fell to 5.

Kai Crutchfield’s layup became a 3-point play. Down to 2.

Notre Dame started to rally once more, with a 6-point run of layups.

A flurry of scoring followed. But Notre Dame stopped with 102 seconds to go, its tally forever stubborn at 63 and that of Miles, who made the Irish’s last 3-pointer, held at 21, the most of any player on the floor on Saturday.

Perez’s scoring had been quiet for a while by then, her last burst of scoreboard-worthy offense a 3-pointer she made in the second.

Mabrey, Perez noticed, had turned her back.

She stormed down the court. She scanned for trouble and delivered again, recalling how she had the game-winning jumper in last year’s Atlantic Coast Conference tournament title game.

“You know, Beyoncé is big, but Raina blows her away,” Moore said. “I mean, come on.”

UConn pushes easily into the round of 8.

Geno Auriemma, the Connecticut coach, moped after his team survived a test from Central Florida on Monday night. He smoked. He confessed Friday that he had complained — though he used a more colorful word — and moaned about “how terrible we are and we’re never going to win another game for the rest of history of UConn women’s basketball.”

UConn, a No. 2 seed, dominated Indiana, 75-58, on Saturday to advance to the round of eight for the 16th consecutive NCAA women’s tournament. If the Huskies beat NC State on Monday night in Bridgeport, where they played Saturday before what approximated a home crowd with all of the accompanying cheers, charms and curses, they will secure their 14th straight Final Four berth.

Indiana, the third seed in the region, constructed an early lead off jumpers. But one of the afternoon’s most encouraging elements for UConn was how the Huskies demolished that lead with help from Paige Bueckers, the sophomore guard who dazzled women’s basketball last season and spent much of this one injured.

Bueckers, her fluid movements, stormed up and down the court. Her shots did not always fall as easily, even as she scored 15 points, one of her most productive showing she hurt her left knee in December.

“Just coming out aggressive helped me a lot,” said Bueckers, who scored 7 of the 13 points that UConn opened the second half with to build a 20-point advantage.

She was far from alone, though, as UConn’s offense erupted and helped keep the Huskies from the kind of debacle that so often marked this season, an injury-and-illness-marked campaign that has been one of UConn’s most frustrating in decades.

For the Huskies, who handily outdistanced Indiana in rebounds and second-chance points, offensive success came not from pinpoint shooting but simply plenty of it. UConn tried 67 field goals, 19 more than Indiana. He missed most of them, and he missed more frequently than the Hoosiers.

UConn’s 3-point shooting percentage fared even worse, with the Huskies making just a quarter of their tries behind the arc.

But the Connecticut defense, which has evolved into a far more fearsome unit in recent weeks, helped the Huskies to bridge any shortcomings by limiting Indiana’s ordinarily splendid guard play. Grace Berger, Indiana’s leading scorer this season, had 13 points, including five off free throws.

Indiana also committed 15 turnovers. which led to 13 points for Connecticut.

As the UConn defense tormented the Hoosiers, whatever thoughts of an upset evaporated. They had started to fade early, back in the first quarter when Fudd and Williams began an 8-point run. Indiana gave up the lead in the midst of that, and it scarcely came near it again.

So much for Auriemma’s nightmare.