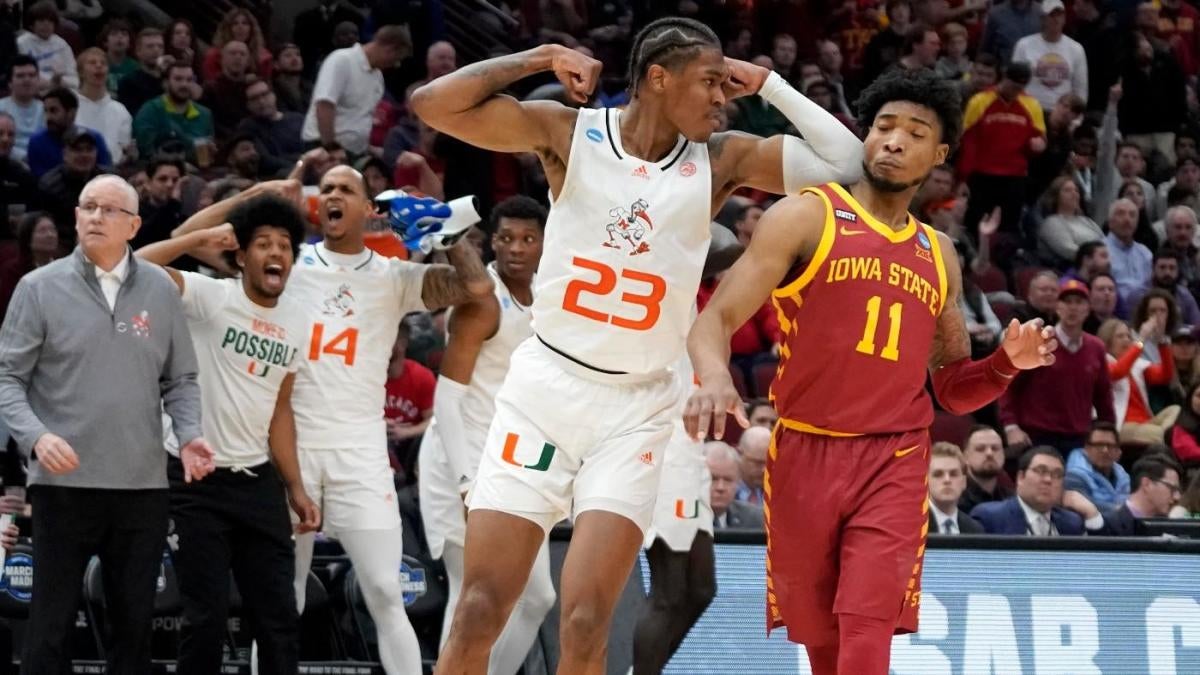 March Madness on Friday went totally mad. Historically mad, to be precise. As Sweet 16 action wrapped up across the country, No. 15 seed Saint Peter’s continued as one of the biggest stories of the tournament, knocking off No. 3 seed Purdue and in the process becoming the first ever No. 15 seed to advance to the Elite Eight.

The Peacocks weren’t the only ones to spread their wings in what turned out to be a fantastic day of hoops. Caleb Love turned in a dominant performance to drag North Carolina to the Elite Eight, Remy Martin kept riding his postseason heater for Kansas, and Miami won a slugfest in convincing fashion over Iowa State to set up a Midwest Regional showdown with the only remaining No. 1 seed in the tournament: Kansas.

The stories from Friday were plentiful. We’ve got all the takeaways from the day that was below to get you up to speed ahead of the weekend.

The story of Friday night was the story of the 2022 NCAA Tournament: Saint Peter’s. On National Peacock Day, the Peacocks became the first No. 15 seed to ever reach the Elite Eight. Their 67-64 victory over No. 3 seed Purdue marked the Boilermakers’ third-lowest scoring output of the season and etched Saint Peter’s into eternal college basketball lore.

Even before Friday’s win, the Peacocks had captured the hearts of sports fans across the country by becoming just the third No. 15 seed to ever reach the Sweet 16. But now, they have accomplished something never done before. At this point, who is willing to doubt that more could still be ahead?

“What are they gonna say now?” Saint Peter’s coach Shaheen Holloway asked in his postgame interview on CBS. “All you really can say is, ‘Well done, Saint Peter’s.'”

With one of the most electric players in the sport (Jaden Ivey) and two of the most productive bigs out of the Big Ten (Zach Edey and Trevion Williams), Purdue entered the tournament with promise and potential to realistically get to its first Final Four since 1980. And the No. 1 and No. 2 seeds in its region bowing out early in the tourney only further increased its chances. However, in a stunner to Saint Peter’s, Purdue instead became the answer to a trivia question that will echo for years to come: Which team did Saint Peter’s beat in the Sweet 16 to become the first 15 seed to ever advance to the Elite Eight?

“It weighs on ya,” said Purdue coach Matt Painter. “It eats at ya, man. It’s so hard to get in position to do well. These guys won 29 games, and then you feel awful. We get to this point and you don’t move forward . . . But anyone can have a good team; we have a good program. We just haven’t gotten over that hurdle, haven’t gotten that push. We haven’t been to a Final Four in 42 years. I think about it all the time.”

There was nothing glamorous about the first half of Kansas’ 66-61 win over Providence except for the play of Remy Martin. In a half that featured a combined total of 43 points as the teams combined to shoot 3 of 23 from 3-point range, Martin’s offense stood out. The 6-foot guard scored 13 of his game-high 23 in the opening frame as he continued a strong postseason performance. The Arizona State graduate transfer played a minimal role for the Jayhawks during Big 12 play amid a knee injury, but the time missed does not appear to be hindering his fit in the rotation.

On a night when veteran staples Ochai Agbaji and David McCormack combined to shoot just 4 of 13 from the floor for KU, Martin’s offensive contributions were a necessity. His lone season at KU has been a bumpy ride, but it appears to be on its way to a surprisingly happy ending.

If you’ve watched Ed Cooley’s Friars this season, you knew that after they fell behind by as many as 13 points in the second half to No. 1 seed Kansas, they likely would not go away quietly. Like clockwork, the deficit awoke something in Providence, as they stormed back to make things interesting before falling 66-61.

Providence completely erased the 13-point second-half deficit and briefly took the lead before KU regained control down the stretch. It wasn’t a surprising outcome for either team – that a more-talented KU would advance over a gritty Providence team – but it was symbolic of what the Friars have done all season as one of the most physically grueling and toughest outs all season.

Caleb Love has his March moment

As an underdog facing a higher-seeded UCLA team, North Carolina needed someone – anyone – to step up and drag them to the finish line. Its offense was hurting in a bad way in the first half. As luck would have it for UNC, that someone was Caleb Love, who had 27 of his 30 points in the second half and took over down the stretch. The only thing more impressive than the 12-2 run for the Tar Heels to close the game was Love’s personal accounting for 20 of the team’s final 27 points.

“At the end of the day, you just need guys to step up,” said coach Hubert Davis. “And Caleb Love was absolutely fantastic.”

UCLA led by as many as eight points over North Carolina and held a three-point advantage over the Tar Heels with under two minutes to play. But even that lead was not safe from the nuclear explosion of Caleb Love, as UNC closed on a 12-2 run to scoot past the Bruins 73-66.

“As a coach you can get upset about certain things. Truth is, we had a lot of good execution and the ball didn’t go in,” said Bruins coach Mick Cronin. “Our last three 3s were wide open, we got Jaime the ball down low, Johnny missed a couple, Caleb Love made hard shots.”

The combination of Love’s second-half supernova showing and struggles from UCLA’s biggest stars — namely Jaime Jaquez, who was banged up after an ankle injury in the second round — was enough to send the Bruins home and sink their chances at following up their Final Four season a year ago with another repeat.

The ACC had a down year (more on that in a sec) and Miami finished several games off Duke’s ACC-winning pace, so the Hurricanes dropping to a 10 seed for the tourney wasn’t a huge surprise. But clearly we underestimated just how solid this team is and how tailor-made it is to win in March. Jim Larranaga’s bunch is old, productive, and a nightmare matchup on short preparation to face, as Iowa State learned firsthand in falling 70-56 to Miami on Friday.

Isaiah Wong has been the star for Miami this postseason but in a game in which he scored seven points, senior Kam McGusty stepped up with 27 points and Jordan Miller added 16. It’s a rare luxury Larranaga has with a talented — and old — roster that knows what it is and plays hard and unselfish at all times. Now they’ve got a chance to prove on the biggest stage — against the title favorite in No. 1 Kansas — just how good they are.

ACC redeeming itself in March

Only five ACC teams earned bids to the Big Dance in what was, unquestionably, a down year for the league with Florida State, Louisville, Syracuse and Virginia — all teams typically in the tourney — struggling. But how about this: three of the five are still dancing into the weekend. Duke, North Carolina and Miami are all headed to the Elite Eight after wins in the Sweet 16, the most for any league.

“Our league is really, really good,” Larranaga said. “Everybody recognizes Duke and Carolina, those teams are traditionally very very strong. But the other teams in our league are very talented, very deep, have great coaches. Very proud of being a part of the ACC.”