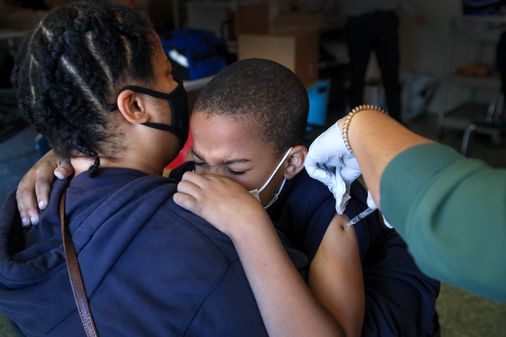 Overall, the researchers found that stark disparities in vaccine and booster coverage persist in the state, leaving thousands vulnerable to severe illness as increasingly more transmissible forms of the virus circulate.

“Despite a lull in COVID-19 infection rates, MA is in a precarious position,” they wrote.

In the study, which was posted online Monday but not yet published in a peer-reviewed journal, the team analyzed state data on residents vaccinated and boosted by ZIP code through March 1. They also examined census-tract population estimates and ZIP-code- level socioeconomic and demographic data, including education level, household income, and profession.

“This is not to say that race doesn’t matter,” said Jacob Bor, an assistant professor in epidemiology and global health at Boston University’s School of Public Health and lead author of the study.

Race, ethnicity, age, and education levels overlap, he said. The team found that communities of color and those with a lot of essential workers are, on average, younger and have lower levels of education and lower incomes, which can affect people’s access to the shots.

“These differences in income and education among Black, Latino, and Indigenous populations are a product of longstanding patterns of differential access to education, wealth, and opportunity,” Bor said.

Income, the team found, was also a strong predictor of vaccination coverage. A $10,000 increase in a ZIP code’s median household income was associated with higher vaccination and booster rates. From the lowest to the highest income levels, booster coverage increased from under 30 percent to over 60 percent.

“Our analysis shows that education and income are better explanations for the patterns than race or ethnicity itself,” said Dr. Jonathan Levy, who chairs the department of environmental health at BU’s School of Public Health, and is senior author of the research.

But despite high, relatively equitable coverage for the original vaccine schedule in adults, researchers found large inequities in rates among children, and very large inequities for booster shots in all age groups.

“We must redouble our ongoing efforts to overcome barriers related to poverty and education like collaborating with community partners who offer vaccination outside of health care venues, after hours, and on weekends, and provide clear and accurate information from trusted sources,” said Dr. Bisola Ojikutu, Boston’s Commissioner of Public Health, and a coauthor of the study.

“The only way to address this inequity,” she said, “is through persistence.”

Disparities were also pronounced when looking at who has received at least one booster shot, and controlling for education and age levels did not change that picture as it did for the primary vaccine series. The share of residents 65 and older who have received a booster was just over 50 percent in ZIP codes with the lowest share of college graduates and highest share of Black, Latino, or Indigenous people, the researchers found. Yet booster coverage was over 70 percent in more-educated ZIP codes and those with larger White populations.

A better understanding of the causes of the disparities should help policy makers address them, experts said.

“This report highlights that people with complicated lives, and a lot of folks stereotyped as being hesitant, actually had high vaccination rates. And it really points to this being an access issue and we have to be better,” said Atyia Martin, executive director for Next Leadership Development, a nonprofit that focuses on building resilience in Black communities.

While vaccines have been widely offered in local pharmacies and doctor’s offices, Martin and others said many lower-income essential workers often lack the transportation or time off, particularly if they suffer side effects after getting vaccinated.

“We have to have strategies that are more sophisticated and account for people’s real lives and what they’re dealing with,” Martin said. “And we have to let the data be the guide for the decisions we are making.”

The researchers suggested that strategies used successfully during the initial vaccine rollout, such as establishing more convenient places and times for essential workers to get the shots, should be widely extended for boosters. They also said Massachusetts should especially target this push in lower-educated communities, regardless of racial composition.

Nadia Abuelezam, an associate professor who specializes in biostatistics and health inequities at the Connell School of Nursing at Boston College, said the study offers very specific geographic information — down to the ZIP code level — for fine tuning public messages in future vaccination initiatives.

“It allows us to think about where people live, work, and play, and how that influences their health,” she said.

Michael Curry, chief executive of the League of Community Health Centers, was struck by the strong correlation the researchers found between education level and vaccination status. And he said that policy leaders, as well as health providers need to use that finding to guide ongoing and future vaccination efforts.

“We have got to stop relying on people having a college degree or high school diploma to get what they need to make decisions on their health,” he said.

“We need employers to be in lockstep with providers and health plans, in constantly providing health information and wellness counseling that can prevent the high rates of morbidity and mortality in this pandemic,” he said.

And, Curry added, that approach would be effective for other health initiatives, such as cancer screenings or diabetes care.

But the researchers expressed concern that the lessons from the pandemic, and the disparities revealed by their work, are not being heeded even now.

“Rates of new vaccinations and boosters have slowed as Massachusetts has exited the winter surge and as officials now project a “return to normal,” said Bor, the study’s lead author. “Without new efforts to expand coverage, these inequities are likely to persist.”

The upshot, he said, is that “there are going to be a lot of people in poorer, lower-education ZIP codes — regardless of racial composition — who are going to suffer in future COVID waves because of low vaccination and booster rates.”