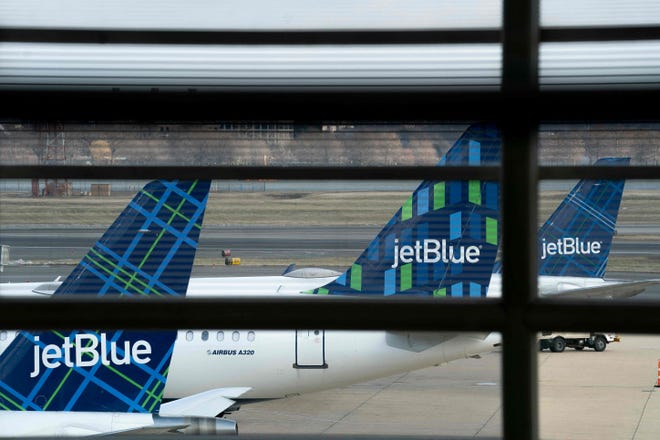 JetBlue said late Tuesday that the proposal is “superior” to the merger deal between Spirit and Frontier announced in February and is the “most attractive opportunity” for Spirit’s shareholders.

The offer could later Spirit and Frontier’s well-laid plans to create a budget airline powerhouse that will be able to better compete with American, Delta, United and Southwest airlines.

JetBlue is making a similar pitch about a JetBlue-Spirit combination and says it brings something additional to the table for Spirit passengers: its beloved inflight perks and service.

TRAVELER IMPACT: What Spirit-Frontier merger would mean for passengers

NEW SOUTHWEST FARE:Cancel a flight and wish you could transfer the credit to someone? Southwest will soon let you – for a price

“Customers shouldn’t have to choose between a low fare and a great experience, and JetBlue has shown it’s possible to have both,” JetBlue CEO Robin Hayes said in a statement. “The combination of JetBlue and Spirit – coupled with the incredible benefits of our northeast alliance with American Airlines – would be a game-changer in our ability to deliver superior value on a national scale to customers, crewmembers, communities, and shareholders.”

Hayes told JetBlue employees in a memo after the proposed deal was announced that the pairing is not as odd as it might appear.

“We can all agree that Spirit has a very different brand and product than JetBlue, and so at first glance you may not think we’d make a great pair,” Hayes said. “However, when you dig deeper, you’ll realize we could be a perfect match.”

JetBlue said the combined airline, which would be the nation’s fifth-largest based on annual revenue and would take the JetBlue name, would be a stronger competitor in Florida, where both airlines already have a strong presence. The airline said it would also be able to offer more flights across the United States, Caribbean and Latin America.

Spirit said in a statement that it is evaluating the offer.

“Consistent with its fiduciary duties, the Spirit board of directors will work with its financial and legal advisors to evaluate JetBlue’s proposal and pursue the course of action it determines to be in the best interests of Spirit and its stockholders,” the company said in a statement.

Frontier is already on the offense, saying a JetBlue-Spirit merger would not be good for travelers.

“Unlike the compelling Spirit-Frontier combination, an acquisition of Spirit by JetBlue, a high-fare carrier, would lead to more expensive travel for consumers,” the Denver-based airline said in a statement. “In particular, the significant East Coast overlap between JetBlue and Spirit would reduce competition and limit options for consumers. It is surprising that JetBlue would consider such a merger at this time given that the Department of Justice is currently suing to block their pending (northeast ) alliance with American Airlines.”

JetBlue and Spirit overlapped on 11% of scheduled routes in 2021, compared with about 18% overlap between Frontier and Spirit, it, according to aviation data company Cirium.

Spirit and Frontier announced a deal in February to create the nation’s fifth-largest airline based on seat capacity and seventh based on annual revenue. The CEOs from both airlines have been touting the benefits to travelers since then.

JetBlue and Spirit’s flights are concentrated on the East Coast, while Spirit and Frontier have strength on opposite ends of the country. JetBlue and Spirit were among the hardest hit by heavy weekend flight cancellations that stranded travelers around the country during the busy spring break travel season.

Spirit continued to struggle on Tuesday, with 17% of its flight canceled and another 23% delayed, according to flight tracker FlightAware.