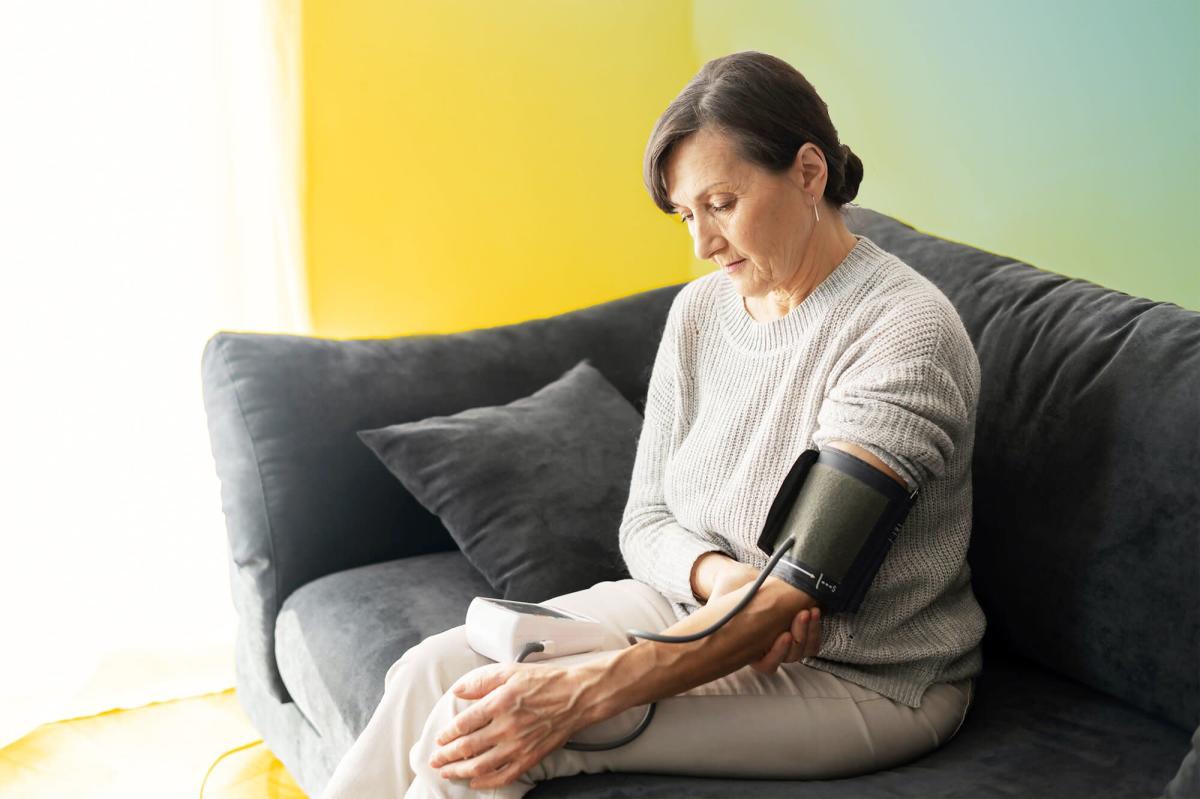 When you’re dehydrated or haven’t eaten in a while, you might feel dizzy after standing because your body is delayed in sending blood back upward. And for some people, this dizziness might last longer than just a few minutes and could be a sign of something bigger happening, like a heart condition or an endocrine problem causing hypotension (or low-blood pressure).

But even fully-hydrated, fed folks without hypotension could see a minor dip in blood pressure after standing, according to the American Heart Association—and that’s perfectly normal. On the other hand, new research shows that a rise in systolic blood pressure upon standing could indicate a higher risk for a cardiac event in the future.

The study, published last week in Hypertension, assessed data over 17 years from more than 1,200 people from 18 to 45 years old in Italy, all of whom had untreated stage 1 hypertension. That means their systolic blood pressure (the top number on your blood pressure reading) was between 140 and 159, or their diastolic blood pressure (the bottom number) was between 90 and 100. Normal, healthy blood pressure is defined as less than or equal to 120 mm Hg over 80 mm Hg, which is often also seen as 120/80 mm Hg. (“mm Hg” stands for “millimeters of mercury,” which is the measurement used for blood pressure). All of the participants had an estimated low risk for major cardiovascular events due to an active lifestyle and healthy medical history.

Related: The #1 Diet to Lower High Blood Pressure, According to Science

When the researchers followed up with participants around 17 years later, they found that the group whose systolic blood pressure rose by at least 6.5 mm Hg were twice as likely to have had an adverse cardiac event or a stroke than the other 90% of participants. The study also found that obesity, family medical history and activity levels had no impact on mitigating or exacerbating the risk, but participants in the higher-risk group were more likely to be smokers.

“The results of the study confirmed our initial hypothesis—a pronounced increase in blood pressure from lying to standing could be prognostically important in young people with high blood pressure. We were rather surprised that even a relatively small increase in standing blood pressure [6-7 mm Hg] was predictive of major cardiac events in the long run,” lead author of the study Paolo Palatini, MD, said in a media release.

The study also looked at a smaller subset of 630 participants who had their stress hormone levels measured over 24 hours. Researchers found that epinephrine-creatine ratios were higher among those whose blood pressure rose upon standing.

“Epinephrine levels are an estimate of the global effect of stressful stimuli over the 24 hours. This suggests that those with the highest blood pressure when standing may have an increased sympathetic response [the fight-or-flight response] to stressors,” Palatini said. “Overall, this causes an increase in average blood pressure.”

While dizziness might accompany low blood pressure upon standing, you might feel flushed or feel your heart beating faster with high blood pressure—though the 6.5 mm Hg rise some participants in this study saw might not even bring on such symptoms.

So how do you know if you’re at risk? Unless you do an orthostatic blood pressure test with your primary care provider (where you test your blood pressure lying down and then standing up), you might not know. And the reality is this study will need further supporting evidence for the results to be confirmed. All of the participants included were white, and most of them were men, making it unwise to generalize among the greater population.

But if you’re concerned about your blood pressure while sitting, standing or doing anything else, there are plenty of ways you can adjust your eating habits for a healthy blood pressure. Trying out the easy-to-follow DASH (or Dietary Approaches to Stop Hypertension) diet is a great place to start. (Read more about how to follow the DASH diet here.)

Since potassium can help your kidneys get rid of excess sodium, eating more high-potassium foods, like bananas, salmon, avocados and white beans, could be a good choice for helping you achieve a healthy blood pressure. And cooking at home more and using lower-sodium ingredients can help you reign in your sodium intake.

A new study in Hypertension found that people whose systolic blood pressure (or the number on top in a blood-pressure reading) rose significantly upon standing were twice as likely to experience a cardiac event, including chest pain, heart attack and stroke. The study was demographically limited, so further research is needed to confirm the results. But if you want to take special care of your blood pressure, eating more potassium-rich foods and trying a heart-healthy eating pattern can help you take care of your ticker.