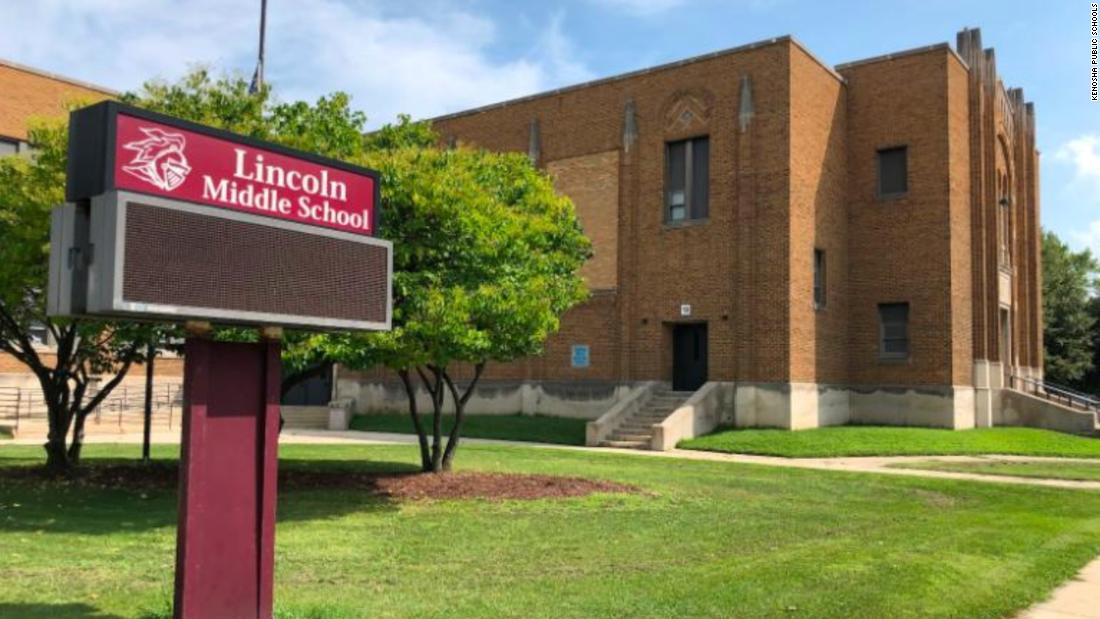 The video, which includes different angles of the incident without sound, shows a fight begin between two students as an off-duty officer, working school security at the time, attempts to break it up before either being hit or falling backward with one of the students. It appears he hits his head on the edge of a nearby table. Shortly after, the officer is seen on top of the student and appears to push his head into the ground with one hand and then place his knee on his neck for about 25 seconds, appearing to apply the pressure of his body weight at some points.

The 12-year-old girl is eventually handcuffed, picked up, and led away, the video shows.

CNN is not naming the 12-year-old as she is a minor. The family’s attorney, Drew DeVinney, said the officer’s knee was on her neck for an “unconscionable duration.”

“This was a cruel and heartless act of violence aimed at a child and is unacceptable in our society,” the attorney said in a statement.

The girl’s father received the surveillance video Friday, is “appalled by what he has seen,” and is demanding the Kenosha Police Department “immediately terminate” this officer, the statement added.

The officer was off-duty at the time and working part-time as a school security guard, but he has since resigned from his position with the school district. CNN reached out to the Kenosha Police Department inquiring about his status as a police officer but has not received a response. The department also did not respond when asked about the extent of any injuries the officer may have sustained as part of this incident.

Police did confirm to CNN this week, however, that a criminal charge of disorderly conduct has been referred to the court system for “both juveniles involved in the incident.”

The Kenosha County District Attorney’s Office indicated there is generally a 40-day window before the facts of any juvenile case like this, if not settled beforehand, could make it to their office for any potential decision on a formal charge.

“There is no pretty arrest,” Mac Hardy, Director of Operations for the National Association of School Resource Officers, told CNN Friday, but added, “We are never trained to put our knee on the back of anyone’s neck.”

“I’ve never been aware of any training anywhere” in regards to that, he said.

Hardy also pointed to specific factors that would help determine the type of response used in a school fight circumstance like this, including the “age and the size of the children” involved.

“I would’ve liked to see more teachers and more school staff in that situation than that school security officer,” he said, as he acknowledged being in school is “different than what you get on the streets. Not every police officer is cut out to be an SRO (School Resource Officer).”

In regards to the restraint used, a school incident report provided by DeVinney, the girl’s attorney, indicates there was “pressure or weight on the student’s neck or throat, or an artery, or that otherwise obstructs the student’s circulation or breathing,” and that the student was placed in a “prone position.”

The report also says the restraint did not cause any chest compression and there was adequate care to protect the student’s head, despite a screenshot appearing to show the off-duty officer holding the student’s head to the ground.

Kenosha Unified School District policy says that physical restraint on a student would be permissible in certain circumstances, including when a student is presenting a “clear, present and imminent risk” to the safety of others and as long as it’s not a prohibited maneuver or technique .

But putting “pressure or weight on the student’s neck or throat, on an artery, or on the back of the student’s head or neck, or that otherwise obstruct the student’s circulation or breathing,” is among those prohibited maneuvers or techniques, as is placing a student in a prone position “chest down, back up.”

The internal employment investigation has concluded, Tanya Ruder, chief communications officer for the Kenosha Unified School District, told CNN Friday. Ruder added that, “as it appears that this incident may lead to litigation, the district will provide no further details at this time.”

The Kenosha Professional Police Association had no official comment when reached by CNN.