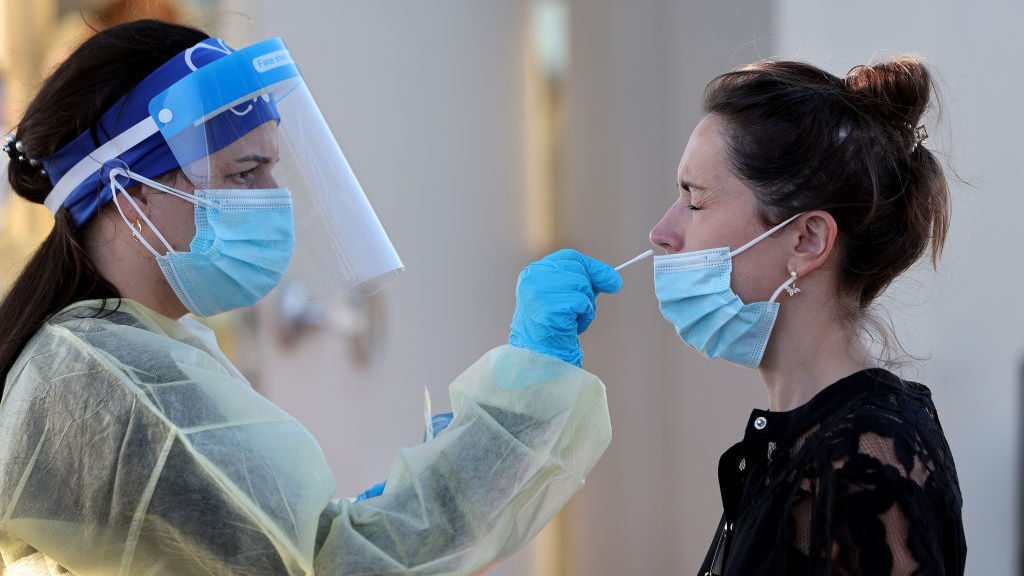 The US omicron outbreak has dramatically slowed, cutting wait times for tests. But health officials worry a new uptick in cases fueled by the BA.2 variant could be on the way.

The US omicron outbreak has dramatically slowed, cutting wait times for tests. But health officials worry a new uptick in cases fueled by the BA.2 variant could be on the way.

US health officials are watching the climb in COVID case numbers in the UK with concern. Daily case counts there have more than doubled, and hospitalizations are on the upswing.

“Over the last year or so, what happens in the UK usually happens here a few weeks later,” Dr. Anthony Fauci, the President’s chief medical advisor said in an interview with NPR. “And right now, the UK is seeing somewhat of a rebound in cases.”

Officials in the UK attribute the increase to the quick-spreading BA.2 omicron subvariant, the widespread removal of COVID restrictions, and to waning immunity from vaccinations and infections.

“All three of those factors we have here in the United States,” says Fauci, “So I would not be surprised if in the next few weeks we see either a plateauing…of cases or even [the curve] rebounds and slightly goes up. That is entirely conceivable. And we’re just going to have to follow it carefully.”

The CDC’s COVID tracker shows that daily cases have dropped to their lowest levels since July 2021 – but the rate of decline in cases has slowed significantly and may be on track to level off.

Wastewater surveillance also points to an uptick in viral activity at sites around the country. Experts caution that this data is new and untested, but consider it another potential sign that the US could see new case growth.

“We are seeing evidence of increases in some communities across the country,” says Amy Kirby, program lead for CDC’s National Wastewater Surveillance System, which detects virus fragments from feces flushed into sewage systems at select wastewater treatment facilities around the country.

The CDC’s wastewater dashboard shows increases at about 35% of sites that monitor concentrations in waste.

“The power of wastewater surveillance is that it’s an early warning system, Kirby notes.

For now, the agency emphasizes that concentrations of viral RNA in wastewater remain low. Still, “what looked like noise at the beginning of the week is starting to look like a true signal here at the end of the week,” she says. The agency has begun to see consistent increases in Florida, Rhode Island and West Virginia.

The wastewater system does not distinguish between omicron and sublineages, like BA.2. But other data show the BA.2 subvariant is taking hold in the US The CDC estimates that it’s responsible for nearly a quarter of new COVID cases in the country so far. It’s concerning because it’s around 30% more transmissible than the original omicron, and less susceptible to some existing COVID treatments.

The good news, CDC director Dr. Rochelle Walensky told NPR’s Morning Edition Friday, is that “it doesn’t seem to evade our vaccines or immunity any more than the prior omicron [variant]. And it doesn’t seem to lead to any more increased severity of disease.”

Still, the impacts of the subvariant are hard to predict, because the “landscape of immunity” varies by time and place, says Lauren Ancel Meyers, director of the COVID-19 Modeling Consortium at University of Texas at Austin. She says it’s hard at this stage to know, “whether we’re going to see a wave, how deadly that wave will be, and all the other things that we would like to be able to anticipate.”

The impact will depend in part on how effective existing immunity turn out to be, and how long it lasts after someone has been vaccinated, boosted, or recovered from infection.

Health officials say they’re watching the signals carefully, but don’t yet see a reason to encourage the country to mask back up. “Less than 1% of the population is living in areas where we believe that masking should be advised at this point,” Walensky said, based on the CDC’s COVID-19 Community Level metric, which looks at the prevalence of severe disease in the community .

But by the time the signs of an outbreak are clear, it can be hard to quash, notes Jeffrey Shaman, a professor at Columbia University’s Mailman School of Public Health: “The longer you wait to act on it, the less effective [those actions are at] actually preventing deaths.” Recent surges show “it will get ahead of you if you don’t jump on it early, if you don’t put the controls in place,” he says.

And he says he can imagine seeing some kind of uptick in cases here, based on the situation in the UK, though it’s too soon to tell.

Given that the BA.2 variant doesn’t appear to cause more severe disease or greatly evade vaccine protection, Fauci says even if the US does see a rise in cases, it is unlikely to cause a major surge in severe disease. Still, he says, if cases jump, “We must be ready to pivot and, if necessary, to go back to stricter mitigation with regard to masks” – an option he acknowledges is a hard sell to a pandemic-fatigued public.

Though the BA.2 variant might not have a severe impact in many communities, it’s still important to stop the spread, says Dr. Jeremy Luban, a virologist at University of Massachusetts. “The more infections we have in the community, the greater the possibility there is for the virus to acquire new properties” and create a new variant, he says.

With the original omicron and now BA.2, “we’ve been relatively lucky that those variants have not caused as severe disease” as past variants, Luban says. The next variants may not be so kind.