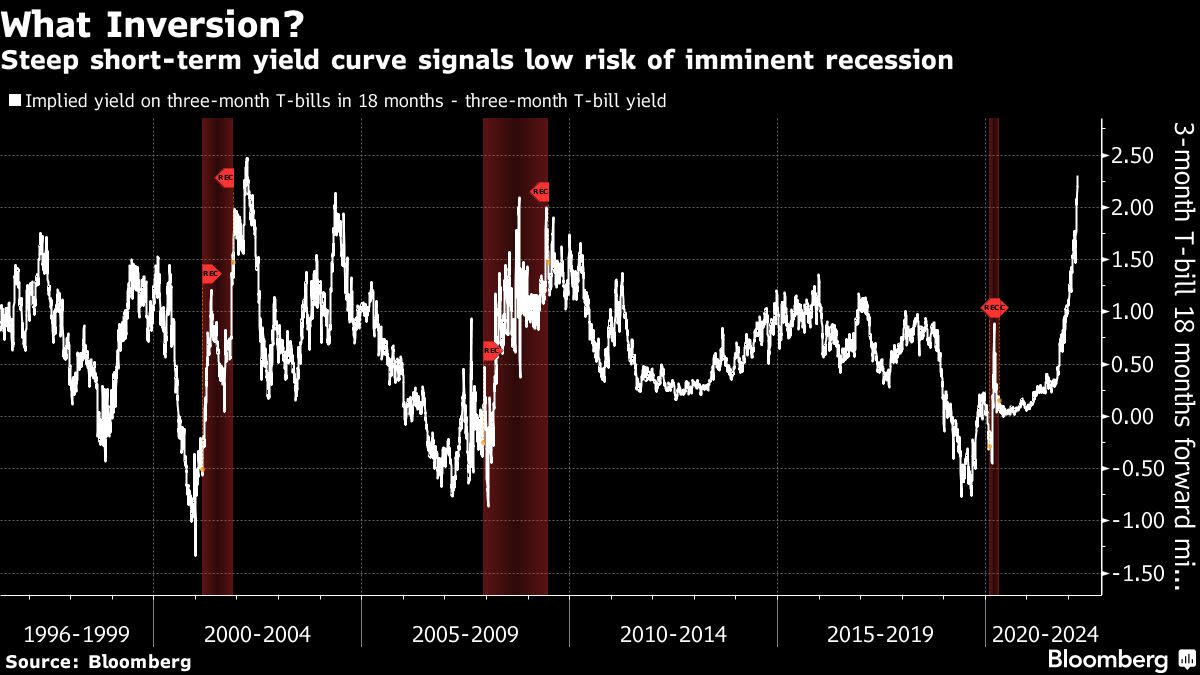 (Bloomberg) — Jerome Powell had a simple response this week for doomsayers who point to scary Treasury-market moves as evidence that the Federal Reserve will tip the economy into recession through its tightening campaign: You’re looking at it all wrong.

Most Read from Bloomberg

Instead of fixing on ominous bond shifts — like the five-year rate trading above its 10-year counterpart and a flatter US curve, more generally — traders on Wall Street should take their cues from another corner of the debt world altogether: the short term yield curve.

On Monday, Powell cited the steepening gap between the forward-implied rate on three-month Treasury bills versus the current three-month level as a tell-tale sign that the bond market has actually given an economic all-clear.

Powell’s message at the National Association for Business Economics was unmistakable: the Fed has plenty of room to aggressively jack up rates to fight inflation without choking growth.

Treasuries are taking another beating Friday with Citigroup Inc. ramping up projections for rate hikes including four straight half-point moves, while the gap between five- and 30-year Treasuries dipped into single digits to the lowest levels since 2006.

As such, warnings of a recession-inducing policy mistake are growing. This week, Goldman Sachs Group Inc. joined those predicting a “modest inversion” in the two- to 10-year spread by the end this year. Inversion, where short-term yields exceed longer-term ones, is a time-honored and widely followed indicator of oncoming growth trouble.

“It’s becoming more and more clear that the Fed is willing to risk growth to fight inflation,” said Peter Yi, director of short-duration fixed income and head of credit research at Northern Trust Asset Management. “Powell has been suggesting that every meeting is live and a 50 basis point hike at every meeting is a possibility, which is going to create pressure for the curve to invert.”

The near-term forward spread measures the difference between bets on where the three-month rate will be in 18 months’ time and that same rate today. That curve, along with the more traditional three-month, 10-year spread, has steepened to multi-year highs, spurred by expectations that a hawkish Fed may frontload interest-rate increases, taking the federal funds rate to about 2.8% at the end of 2023.

A 2018 Fed research paper highlighted that the shorter-term yield curve eliminates complicating factors like the so-called term premium, and thus gives a cleaner read on market expectations for future monetary policy. In effect, the gauge would only invert when a large cohort of investors expected rate cuts on the basis of slowing growth. Previous Fed research has found it has a better predictive power than other parts of the curve — a conclusion the chair endorsed Monday.

“As we have argued previously, 2y10y inversion used to be a reliable recession signal because it indicated that markets were pricing substantial rate cuts by the Fed,” Bank of America Corp. economist Aditya Bhave wrote in a note Friday. “Today the slope of the yield curve is being suppressed by negative term premia and ultra-low yields in other countries, which make long-end US Treasuries very attractive to foreign investors.”

History has shown that when the force of a Fed tightening cycle causes a yield-curve inversion, it foreshadows a pending recession as consumer spending and business activity increasingly buckles under the weight of policy tightening.

Campbell Harvey was one of the first to historically show the link, with his work on the three-month, 10-year spread — which has inverted before each of the past eight US recessions. These days, the professor at Duke University’s Fuqua School of Business is concerned about growing threats to the US recovery, even though his beloved spread is not yet flashing “code red.”

High inflation and “geopolitical risk — which we haven’t even felt the economic outcome of yet, besides at the gas pump — is all acting like a tax,” Harvey said. “It all indicates slower economic growth.”

For similar reasons, money managers including Yi at Northern Trust and Steven Oh at PineBridge Investments LP are betting the Fed will likely pause policy tightening later this year.

If the Fed decides to tighten in earnest, a further flattening in key sections of the curve looks inevitable — with the next leg possibly powered by a higher three-month Treasury rate. The latter has ample scope to catch up with the policy-sensitive two-year rate, which has already surged past 2% from less than 0.75% at the end of December.

Federal Reserve Bank of St. Louis President James Bullard, regarded as the most hawkish Fed policy maker, continues to call for the policy rate to rise to above 3% this year, citing the 1994 tightening cycle. Back then, the Fed chair, Alan Greenspan, surprised markets with an aggressive policy response — causing the gap between the three-month and 10-year yields to converge — but the continued US expansion ultimately stopped an inversion in its tracks.

All that suggests risks are rising for bond investors, with the spread between five-year notes and 30-year securities shrinking again this week to around levels unseen since before the global financial crisis.

“We have gone from at the start of the year virtually zero chance of recession in 2023 to now maybe around a 25% to 35% probability,” said Oh, global head of credit and fixed income at PineBridge, which manages about $149 billion in assets.

(Adds comments from Bank of America economist in tenth paragraph)

Most Read from Bloomberg Businessweek