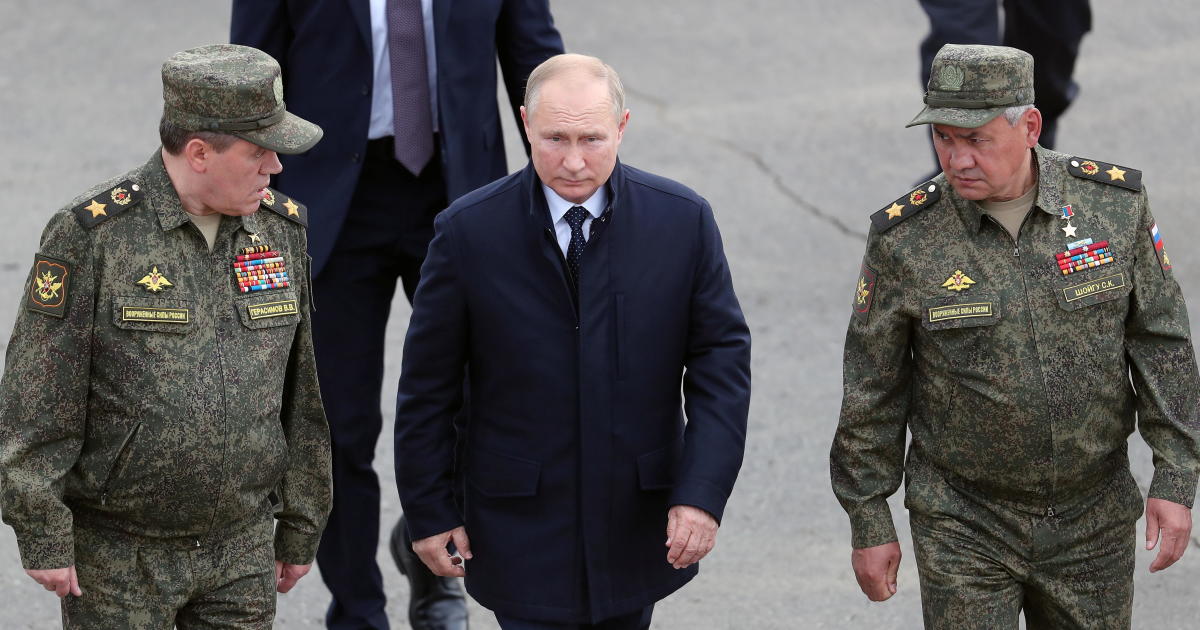 US intelligence officials have determined that Russian President Vladimir Putin is being misinformed by his advisers about the poor performance of Kremlin troops in Ukraine, the Associated Press reported and CBS News confirmed.

A US official, who spoke on the condition of anonymity to discuss recently declassified intelligence, said Wednesday the intelligence finding indicates that Putin is aware of the situation on information coming to him and there is now persistent tension between him and senior Russian military officials. President Biden, in an exchange with reporters, would not comment. Later Wednesday, White House communications director Kate Bedingfield also would not say whether the president approved the release of the intelligence.

But the administration is hopeful that disclosing the finding could help prod Putin to reconsider his options in Ukraine. The war has ground to a bloody stalemate in much of the country, with heavy casualties and Russian troop morale sinking as Ukrainian forces and volunteers put up an unexpectedly strong defense.

However, the publicity runs the risk of further isolating Putin, who US officials have said seems at least in part driven by a desire to win back Russian prestige lost by the fall of the Soviet Union.

In Algeria Wednesday, asked about the report that Putin felt misled by his defense ministers, Secretary of State Antony Blinken didn’t directly confirm the story, but he told reporters that “one of the Achilles’ heels of autocracies is that you don’t have people in those systems who speak truth to power or lack the ability to speak truth to power. And I think that is something that we’re seeing in Russia.”

Also on Wednesday, President Biden spoke on the phone with Ukrainian President Volodymyr Zelenskyy for about 55 minutes and told him an additional $500 million in direct aid for Ukraine was on its way. It’s the latest slice of American assistance as the Russian invasion grinds on.

The two also reviewed security aid that has already been delivered to Ukraine and the effects that weaponry has had on the war, according to the White House.

The unidentified official did not detail the underlying evidence about how US intelligence made its determination.

The intelligence community has concluded that Putin was unaware that his military had been using — and losing — conscripts in Ukraine. And it has also determined he is not fully aware of the extent to which the Russian economy is being damaged by economic sanctions imposed by the US and allies.

The findings demonstrate a “clear breakdown in the flow of accurate information” to Putin, and show that Putin’s senior advisers are “afraid to tell him the truth,” the official said.

Zelesnkyy has pressed the Biden administration and Western allies to provide Ukraine with military jets, something that the US and other NATO countries have so far declined to accommodate because of fears it could lead to a broadening of the war by Russia beyond Ukraine’s borders.

Before Wednesday’s announcement of $500 million in aid, the Biden administration had sent Ukraine about $2 billion in humanitarian and security assistance since the start of the war in late February.

That’s part of the $13.6 billion that Congress approved earlier this month for Ukraine in a larger spending bill. The House and Senate will be receiving classified briefings on Ukraine on Wednesday.

The new intelligence came after the White House on Tuesday expressed skepticism about Russia’s public announcement that it would dial back operations near Kyiv in an effort to increase trust in ongoing talks between Ukrainian and Russian officials in Turkey.

And Ukrainian officials say Russia has continued shelling near Kyiv and the northern city of Chernihiv despite Russia’s claim that it would curtail operations “to increase mutual trust” for peace talks.

The Pentagon said Wednesday that over the past 24 hours it had seen some Russian troops in the areas around Kyiv moving north toward or into Belarus. Pentagon press secretary John Kirby said in interviews with CNN and Fox Business that the US does not view this as a withdrawal but rather, as an attempt by Russia to resupply, refit and then reposition its troops.

Putin has long been seen outside Russia as insular and surrounded by officials who don’t always tell him the truth. US officials have said publicly they believe that limited flow of information –- possibly exacerbated by Putin’s heightened isolation during the COVID-19 pandemic -– may have given the Russian president unrealistic views of how quickly he could overrun Ukraine.

The Biden administration before the war launched an unprecedented effort to publicize what it believed were Putin’s invasion plans, drawing on intelligence findings. While Russia still invaded, the White House was widely credited with drawing attention to Ukraine and pushing initially reluctant allies to back tough sanctions that have decimated the Russian economy.

But underscoring the limits of intelligence, the US also underestimated Ukraine’s will to fight before the invasion, said Lt. Gen. Scott Berrier, head of the Defense Intelligence Agency, in recent testimony before Congress.

Sara Cook and Bo Erickson contributed to this report.