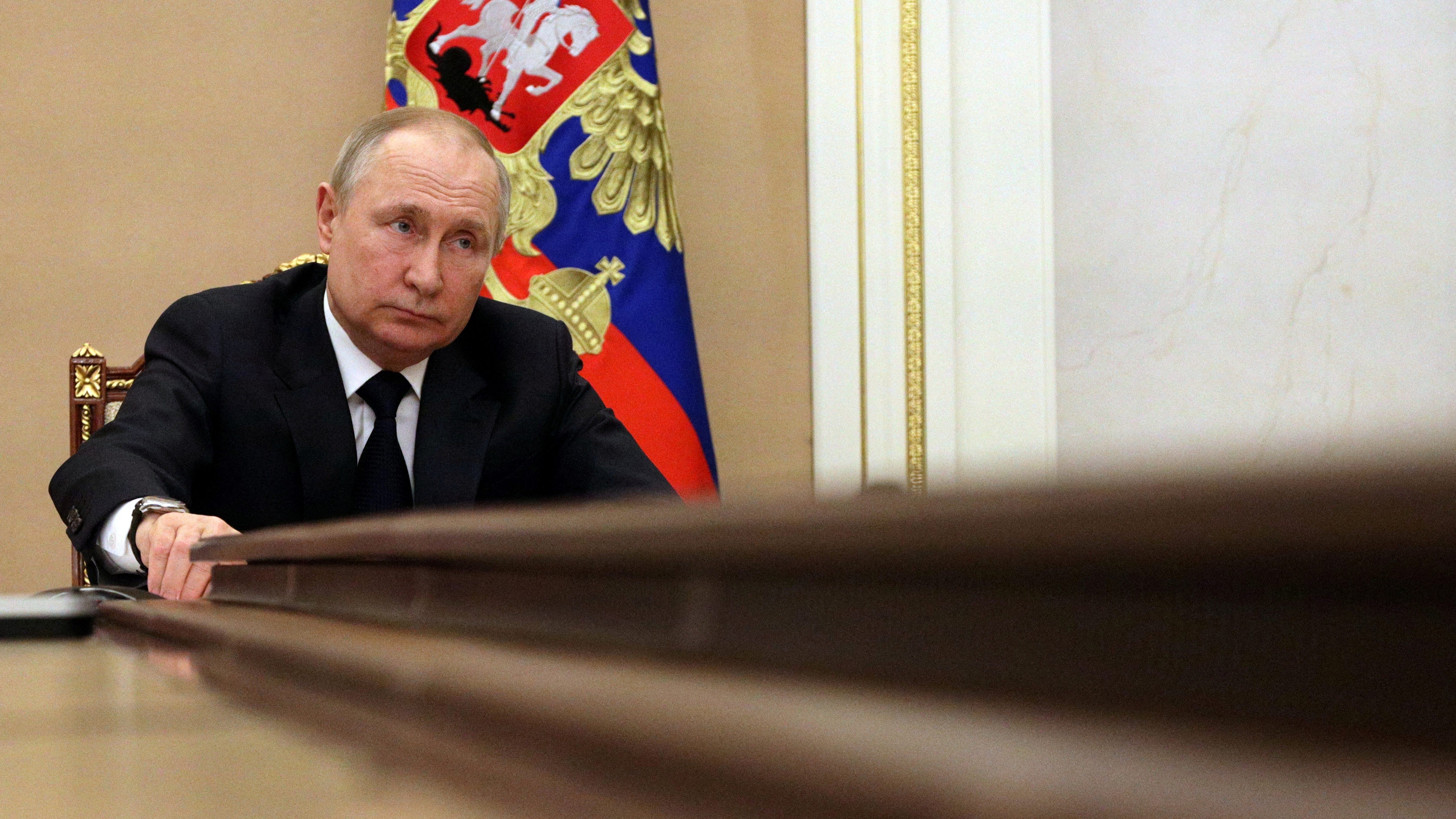 Vladimir Putin is adjusting his rhetoric following his stalled invasion of Ukraine, touching on Stalinist nostalgia and patriotic themes to boost public support for the war, which he calls a “special military operation” and claims was launched as a defensive measure.

In a speech Thursday, he peppered his remarks with “Stalin-esque” dog whistling and warnings of a “fifth column” of Russian “scum and traitors” working to undermine his ambitions from within, according to a translation of his remarks.

“The West, collectively, is trying to fracture our society … to provoke a civil conflict in Russia by means of the fifth column,” he said. “The goal is Russia’s collapse.”

This is a dog whistle to those people who are Stalin supporters and supporters of a strong authoritarian hand.

He called for a “self-purification” to rid Russia of internal war critics and accused the West of “canceling” Russia on the world stage while claiming Europe has “united” itself with “Hitler’s aggression” against Russia. A banner on the stage read, “For a world without Nazism” in Russian. Before invading Ukraine, he accused Kyiv of being run by “neo-Nazis” and “drug addicts.”

“The Russian people will always be able to differentiate true patriots from scum and traitors and will simply spit them out like an insect that accidentally flew in and got trapped in your mouth,” he continued. “I am confident that a necessary self-cleansing of society will only strengthen our country, our solidarity and readiness to respond to any challenges.”

At the same time, his government is cracking down on dissent and independent journalism, locking up seven reporters in connection with government events in Moscow and St. Petersburg Friday, according to the OVD-Info group, which monitors politically motivated arrests.

Prosecutors also charged an expat food blogger with violating a new law banning criticism of the Russian military, which carries a punishment of up to 15 years in prison. And a TV producer from the Kremlin’s leading state-owned network was fined last week after photobombing his own set during a live broadcast with an anti-war message.

It’s an equivalent of the ‘Red Terror’ period during Stalin, who galvanized the Russians to look for ‘the enemies of the people’ and turn them into Secret Police.

“Putin is calling on the Russian people to root out and expose the traitors and bring them to the attention of government authorities,” said Rebekah Koffler, a former Defense Intelligence Agency officer and author of “Putin’s Playbook: Russia’s Secret Plan to Defeat America. “

“He is basically encouraging people to turn in their friends and neighbors whom they perceive as ‘the fifth column,'” she told Fox News Digital. “It’s an equivalent of the ‘Red Terror’ period during Stalin, who galvanized the Russians to look for ‘the enemies of the people’ and turn them in to Secret Police. Stalin authorized murders of millions of people who were perceived as disloyal to the Soviet government and the Communist Party.”

She said Putin may be deliberately leaning into Stalin-inspired messaging because the late Soviet dictator’s popularity is actually on the rise. More than half of the country viewed Stalin as a “great leader” during polling last year, and in 2017, Putin was viewed as one of the most outstanding figures in Russian history, outranked only by Stalin.

A cloud of smoke rises after an explosion in Lviv, western Ukraine, Friday, March 18, 2022. The mayor of Lviv says missiles struck near the city’s airport early Friday.
(AP Photo)

“What Putin is now counting on is there will be a ‘Red Terror’ again, like we had back in Stalin’s time, and that people will be afraid to speak the truth, fearing somebody will overhear and report on you,” Koffler explained. “This is a dog whistle to those people who are Stalin supporters and supporters of a strong authoritarian hand.”

Over the years, Putin has painted treason as “the most heinous of crimes,” according to Koffler.

“This is why he has authorized assassinations and poisonings of former intelligence officers, like Alexander Litvinenko and Sergei Skripal, who became turncoats and served as double agents for the US and Western intelligence,” she said.

Dmity Ivanov, a 22-year-old antiwar activist from Moscow, told Reuters that within hours of Putin’s remarks, his mother found threatening graffiti outside their shared apartment.

“Don’t betray the motherland,” he warned. He told the outlet that at least three other people, two activists and a journalist found similar graffiti that evening.

Nataliya Bugayova, a nonresident National Security Research Fellow at the Institute for the Study of War in Washington, DC, said Putin has steadily progressed from an authoritarian toward totalitarianism over his 20 years in charge. He has a strong control of the flow of information within Russia and effective security forces capable of clamping down on protests quickly with minimal resources.

But he could face risks if he overextends his resources.

“You cannot be a Stalin without an oppression regime large enough to act,” Bugayova told Fox News Digital. “He’s still very strong, but this is the first time I think there will be a challenge there to act on his increasingly authoritarian agenda.”

The situation hasn’t immediately made Putin’s grip on the country vulnerable, she said. “However it does mean there are vulnerabilities if someone were to take advantage of them.”

UKRAINE PRESIDENT ZELENSKYY WARNS OF DIRE CONSEQUENCES IF HIS COUNTRY FALLS: WWIII ‘MAY HAVE ALREADY STARTED’

“The repression security services are used to comfortable living and need to be economically supported,” she said. “I think this is the first time where that might be called into question, because of the effects of sanctions, [they] might make it challenging for Putin to feed his whole repression regime.”

Even so, Putin’s aggressive denunciation of “traitors” could solidify his control without a new “Red Terror” by simply driving people out.

“I think he’s betting on the following,” Bugayova said. “First, keep only those in Russia who subscribe to his agenda, or those who may not subscribe keep them silenced or marginalized … and drive everyone else out.”

Unlike the former subjects of the Soviet Union’s Iron Curtain, Russians who want to leave the country now can choose to do so – at least ostensibly. Their goals, however, may be complicated by increased costs, COVID-19 travel restrictions and Western sanctions, Bugayova said.

Kremlin spokesman Dmitry Peskov has also claimed that Russians critical of the war or of Putin’s government were removing themselves voluntarily.

“They are vanishing from our lives themselves. Some people are leaving their posts, some are leaving their active work life, some leave the country and move to other countries,” Peskov told Reuters Thursday. “That is how this cleansing happens.”

A woman looks at the monument to the so-called “polite people” or the Russian servicemen, who enhanced security during the Crimean referendum to secede from Ukraine and join Russia, during celebrations of the eighth anniversary of Russia’s annexation of Crimea in Simferopol, Crimea , March 18, 2022.
(REUTERS/Alexey Pavlishak)

During Putin’s rally Friday dedicated to the eighth anniversary of Russia’s annexation of Ukraine’s Crimea region, he left out the rhetoric about a fifth column of infiltrators and aimed at bolstering public support for the war in Ukraine, according to Koffler.

He invoked patriotic symbolism, the Bible and proud moments of Russian history, she said.

Russian President Vladimir Putin delivers a speech during a concert marking the eighth anniversary of Russia’s annexation of Crimea at Luzhniki Stadium in Moscow, Russia, March 18, 2022. The banner reads: “For Russia”.
(Sputnik/Sergey Guneev/Kremlin via REUTERS)

Bugayova called the miscalculation there “mind-blowing,” especially eight years after Russia’s invasion of Crimea in which, she said, the Kremlin wanted to sixteen six regions from Ukraine but had to settle for portions of two.

“To me, that suggests the information flow and that analytical flow from top to bottom in the Kremlin is broken,” Bugayova said. “Putin is, because of that, losing a bit of touch with factual information on the ground. I wouldn’t say he’s going crazy.”

Still, experts fear that as Moscow’s ground troops continue to falter, the Russian military will continue to escalate attacks on civilian targets in an effort to force Kyiv into concessions in order to end the conflict – a doctrine of escalation to deescalate.

The conflict has already claimed at least 816 civilian lives and injured more than 1,330, according to the United Nations High Commissioner for Human Rights, although officials say the tolls are likely higher.

Western analysts say as many as 7,000 Russian troops may have died as part of Putin’s invasion. Ukrainian defense forces claim to have killed more than 12,000.

Fox News’ Stephanie Pagones and The Associated Press contributed to this report.