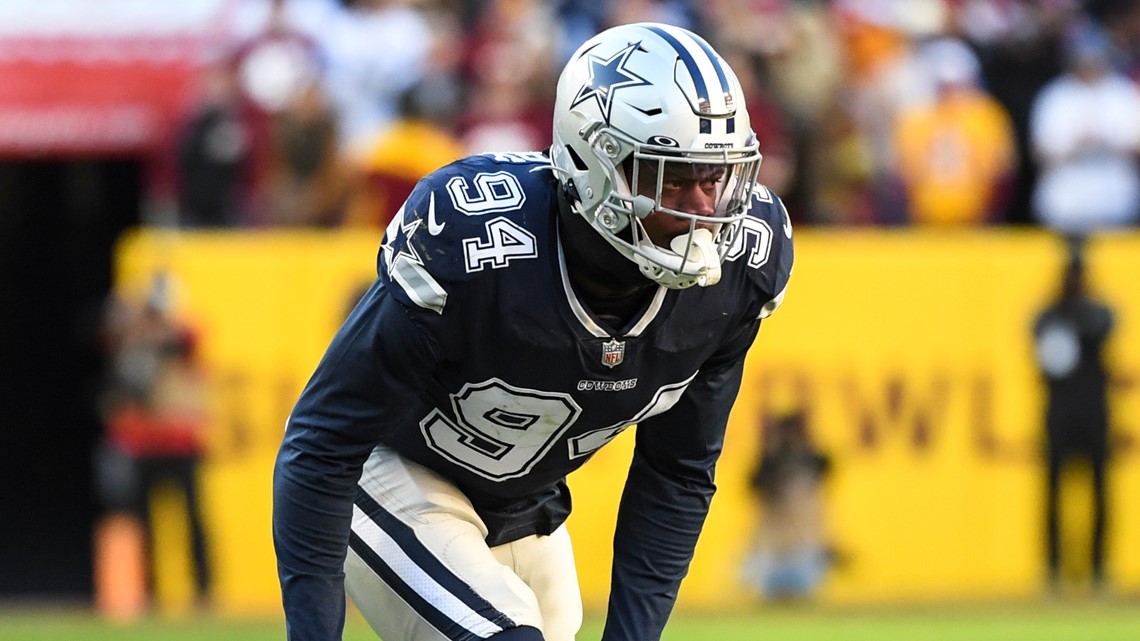 ENGLEWOOD, Col. — No one ever doubted whether Randy Gregory had the ability to play at a $14 million a year level.

The doubt has always been whether he would be permitted to play.

Because of substance-abuse related issues with marijuana, Gregory had often tested positive, and was often suspended by the NFL including for all 16 games in the 2017 and 2019 seasons. In fact, there was a five-year skid from 2016-20 when he served suspensions every year. Between injuries – there were those, too – and disciplinary measures, he played in just 50 of a possible 113 regular-season games over a seven-year period for the Dallas Cowboys.

And yet, he stayed trouble free in 2021, recording 6.0 sacks in 12 games and now he’s with the Broncos on a five-year, $70 million contract that took a couple extra days for his agent Peter Schaffer and Denver contract maven Rich Hurtado to hammer out final details, and the weather to cooperate so his parents could fly in for the contract signing ceremony Friday.

“My history, I have a well-documented history publicly,” Gregory said at his news conference via Zoom after 4 pm Friday. “I have a lot of time here for the fan base and the staff to really get to know me and understand me. I think the public perception isn’t always correct with me. I’ve done a lot of growing up over the last few years. A lot different player and person now, as opposed when I came in as a rookie.

“I truly believe Mr. Paton and the rest of the staff did their due diligence as far as really getting to know me behind the scenes. Figuring out my growth and the timeline. Talking around the league and obviously talking around my former team. I think they feel real confident in that and so with time I think I’ll be able to grow on the fan base here and they’ll really get to understand my story and where I came from and how I am and the way I am now.”

His story includes his parents moving him from state to state during his childhood, getting bullied for a time in grade school, and succumbing to the temptation of pot in high school. He let his grades slip and had to start his college career at a junior college before winding up at Nebraska. He tested positive for marijuana during his 2015 NFL Scouting Combine and from there it was injuries, positive tests, rehab, more positive tests, more rehab and suspensions upon suspensions until finally it seems he turned a corner.

“I really wanted it for myself,” Gregory said. “Had a lot of resources, a lot of help in the past. Really, really strong support system really since I’ve been a child. Been lucky in that sense. That’s never been an issue. It’s really about me wanting it for myself and making sure the right avenue is in front of me to make sure I can succeed. There’s been different things we’ve tried over the course of the last seven years and some things have worked, some things haven’t, some things haven’t sustained. But the biggest thing is I’ve always tried and kept trying. I’m looking at my parents not only here but they lived with me in Texas the last three years and that’s really helped.

“My wife, my kids (daughter and son), my whole entire family, I have a really, really support system. Not a lot of cooks in the kitchen. I think it works better that way having a small inner-circle and being able to take care of my whole obligations.”

It’s been a while since Broncos’ management took a chance on a player who such character flags. Maybe running back Travis Henry was the last one with a similar type of checkered past. Broncos head coach Mike Shanahan signed Henry in 2007 and it didn’t work out. It was also mildly surprising Broncos general manager George Paton took a chance on Gregory. Then again, Paton at his core is a talent evaluator, a scout, and Gregory’s talent as an outside pass rusher jumps off the tape.

And Paton is showing he is willing to take a chance on a player who has gone nearly two years without incident.

“We did a lot of homework on Randy like we do with all the free agents and he’s beloved in the Cowboys’ building,” Paton said. “Everything’s he’s come through, the hard work, the perseverance. The grit that he’s showed. We all go through stuff and he went through it and came through the other side.

At some point during the free agent negotiating period that opened Monday, Paton and Gregory held a lengthy conversation with Denver-based agent Peter Schaffer serving as the intermediary.

“Their questions were a lot tougher than your guys’ questions I will say that much,” Gregory said in his media Zoom interview. “And they asked all the right questions. My agent told Mr. Paton you can ask any question you want everything’s fair game. And Randy’s going to be as honest with you as he can be. And I really feel like the couple conversations we had really went well. And I think they feel safe with what’s needed for me to succeed where they can accommodate me and things like that. I think everyone felt really comfortable with my answers I hope.”

Paton and the Broncos thought they had Gregory on Monday night. But Cowboys owner Jerry Jones stepped in and sweet-talked Gregory back to Dallas by Tuesday morning. But then Schaffer had a problem with the Cowboys’ contract language that said a player’s guaranteed money if fined, not just suspended. It’s an unusual safeguard the Cowboys wouldn’t lift and so Gregory changed his mind and decided to sign with the Broncos after all.

“It’s been a real crazy week,” he said of the flip-flop. “I know there’s a lot of finer details that you guys want to talk about. For me that’s something my agent Peter can handle. But for me being here with the Denver Broncos makes this whole week worth it. It’s been crazy. Even these last 48 hours trying to get this deal hammered out. But it’s been worth the wait. My family’s happy. I believe the Broncos are happy. I’m happy so really looking forward to the future here.”

To help recruit Gregory, the Broncos called in their new secret weapon. Their star quarterback.

“From the point we were able to have discussions in free agency, Denver has been relentless,” Gregory said. “Even Russell Wilson, he probably called me eight times that first night, even that (following) morning. And so having that I felt like not only that they needed me here but they wanted me here. And I really wanted to go somewhere where I was valued and wanted. And I had a strong connection not only with the culture there and the guys there but also the front office and the whole organization.”

The Broncos’ contract with Gregory is guaranteed for two years and $28 million. The final three years and $42 million will come if Gregory keeps it straight off the field, and produces on it. The Broncos are counting on it. So is he.

“There was a point in time I would say I didn’t think I would be here,” Gregory said. “There was a point in time where I didn’t think I would be able to get back in the league and play at the level I’m playing at now. I think that speaks volumes to my effort to better myself not only on the field but as a person and I’m a firm believer in those things going hand in hand. When I have all my obligations taken care of in my personal life I tend to do better on the field.”