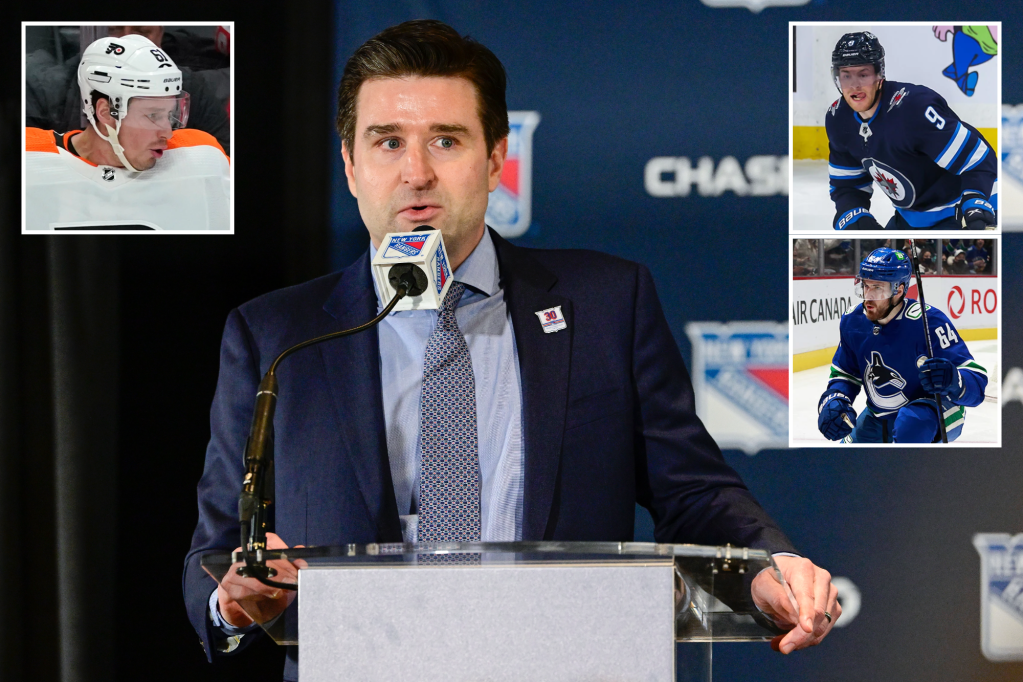 Just as the Big Ten has 14 schools in the conference, the Rangers’ bottom six has about 10 forwards from which head coach Gerard Gallant will be able to choose following Monday’s trade-deadline maneuvering.

But the top six may have only five forwards who legitimately fit into that category, a fact of life exacerbated by the news that Kaapo Kakko will be out for at least the rest of March before the Finn might be able to return from the wrist injury that has sidelined him since Jan. 21.

Best-case scenario, Kakko might have a three-week runway to the playoffs in which to get into hockey condition and hone his timing while attempting to reach a playoff pace. That is going to be a challenge for him.

And it is going to be a challenge for the Rangers, who are so dependent on their marquee names up front but have scored the fewest five-on-five goals among the 16 teams currently in playoff position.

So for the immediate future, what you’ve seen the last three games is probably what you will get: Mika Zibanejad between Chris Kreider and Alexis Lafreniere with pending free agent Ryan Strome skating between Artemi Panarin and Frank Vatrano.

Once Vancouver made it impossible for the Rangers to get JT Miller and then when Anaheim’s price for Plan B (or C) Rickard Rakell escalated beyond GM Chris Drury’s comfort zone, this was the inevitable outcome. The top six is ​​going to need as much support as possible from the bottom six.

Drury was able to add that support to the roster by coming away from his first deadline rodeo with Winnipeg’s coveted middle-sixer Andrew Copp and Vancouver’s bottom-sixer Tyler Motte up front and with Philadelphia’s veteran righty defenseman Justin Braun on the back end. And Drury did so without yielding any one of the organizational blue-chip assets in return.

A passel of draft choices over the next two seasons was sacrificed, including a pair of conditional seconds to the Jets in exchange for Copp, one of which would become this year’s first-rounder if the Blueshirts reach the conference finals. That is a trade-off anyone would make.

Morgan Barron, the forward who just could not quite crack the lineup, was sent to the Jets as part of the deal for Copp. This further dilute the organizational pipeline down the middle, that seems just about bare. But let’s face it, if Drury and the hierarchy perceived Barron as a legit prospect, they’d have found a way to keep him.

Every middle-six guy moved at the deadline is compared to the 2020 version of Blake Coleman or Barclay Goodrow. Copp, 27, has the versatility and upside to be that facsimile and a key component of a third line with, say, Goodrow and Chytil. There is also enough upside in Copp’s offensive game that he could move up into the top six from time to time.

There is this, too. While Copp is a rental, he could become an option to become the club’s second-line center next season if Strome flees. A third party recently told me that negotiations on a contract extension had been, “difficult.” So this will be kind of an audition for the University of Michigan product who has recorded 35 points (13-22) in 56 games while playing primarily with Nikolaj Ehlers and Mark Scheifele. Copp was also on the Jets’ first penalty-kill unit.

If the top nine align as previously suggested, that leaves Motte, Dryden Hunt, Ryan Reaves, Jonny Brodzinski, Greg McKegg and Julien Gauthier playing musical chairs until Kevin Rooney, also sidelined for at least the rest of the month, join the crowd. At least there will be a handful of players at optional practices.

It is unclear whether Braun will bump Braden Schneider to street clothes on the third pair or whether the defense-oriented 35-year-old who has played 12 years on the right would attempt to move to the left side, thus bumping Patrik Nemeth from the line-up.

There is this to consider: Gallant generally sits Schneider for the last 10-12 minutes of a game. Nemeth’s time is reduced in crunch time as well. Cutting the bench becomes a challenge in the postseason. Braun also was on the Flyers’ top PK unit. Gallant might want to use him in place of Adam Fox in certain shorthand situations to give No. 23 a blow.

Within the guideline of protecting the future, Drury did fine on Monday. Maybe a standup double.