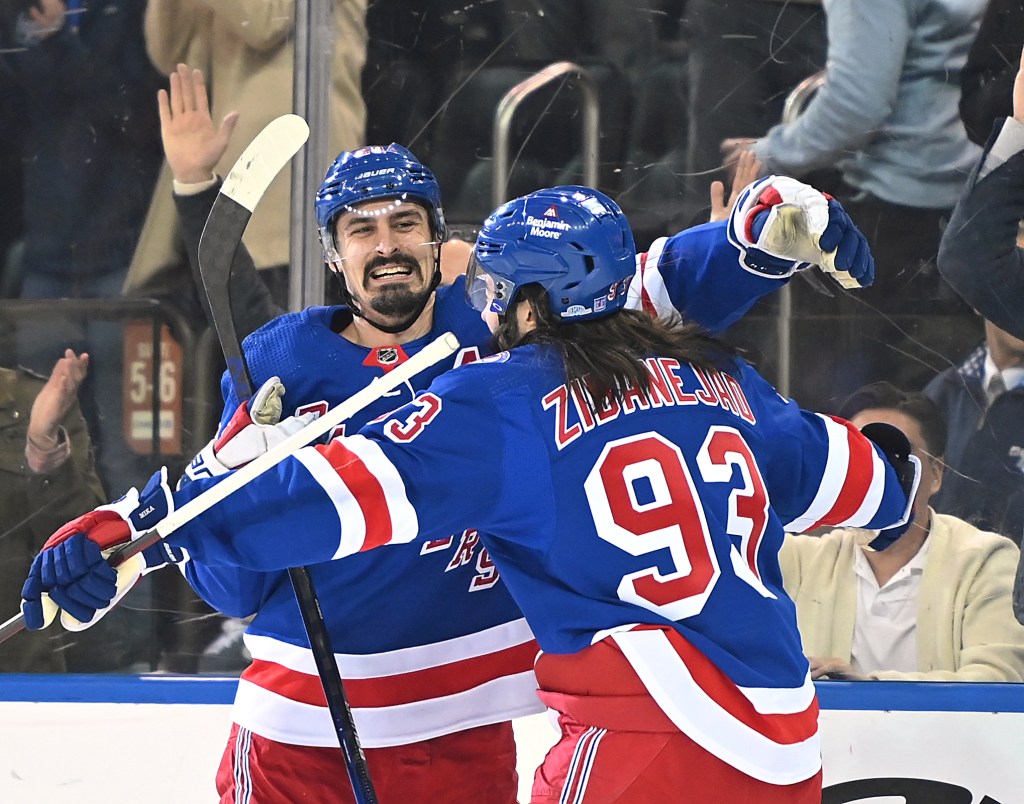 If the Rangers draw the Penguins in the first round of the playoffs, they’ll want to use their game Friday night at the Garden as a blueprint for victory.

The Rangers were a force from puck drop and never relented, scoring three quick goals in the first period that allowed them to keep the Penguins at a safe distance all night, before they came away with a convincing 5-1 win.

There are two more regular-season meetings between the clubs on the horizon — and potentially an entire postseason series. Only one point now separates the second-place Penguins and the third-place Rangers, who have two more wins and a game in hand, in the Metropolitan Division standings.

“These games are big because, if you look at the standings, we’re fighting for second place right now,” Rangers head coach Gerard Gallant said before the win. “Carolina’s got a little jump, but things can change in a hurry. We play Pittsburgh two of the next three games, then we play them a week and a half later than that. So we play them three times within two weeks.”

This was the ultimate bounce-back performance for the Rangers, who were embarrassed across the Hudson River on Tuesday in a 7-4 loss to the Devils. So the Rangers responded with one of their best wins of the season, playing a decisive game that made the Penguins look as if they were in slow motion at times.

The Penguins were without Evgeni Malkin, who was sidelined with a non-COVID illness, though the star center likely wouldn’t have made much of a difference with the way the Rangers skated.

“Part of that was the [New] Jersey game, but also a big game against these guys,” said Mika Zibanejad, who dished three assists and surpassed 500 career points in the process. “We knew we were better than that. We are better than that. We obviously want to play great and have our best game every night — but that’s not going to happen.

“I think the way we responded tonight was a good sign.”

It took just over four minutes in the first period for the Rangers to jump out to a 3-0 lead.

Alexis Lafreniere and Filip Chytil finessed a two-on-one rush. That resulted in Lafreniere, the 2020 first-overall pick, extending his point streak to a career-high five games with a goal at 2:07 of the first. Just under two minutes later, Chris Kreider scored on a breakaway off the bench to double the Rangers’ advantage.

The new-look top line of Kreider, Zibanejad and Frank Vatrano kept up the pressure. Zibanejad fed Vatrano on the doorstep at 4:16, prompting Penguins head coach Mike Sullivan to use his timeout to try and calm his team down.

Pittsburgh nearly got on the board in the first when a Jacob Trouba turnover allowed the Penguins’ Danton Heinen and Evan Rodrigues to push the puck over the goal line. The referees, however, waived it off immediately. The play eventually went under review, but it was determined that Rangers goalie Igor Shesterkin’s pads had been pushed and the no-goal call on the ice was upheld.

Shesterkin had what felt like one of his lightest workloads of the season, turning aside 20 of the 21 shots he faced to help the Rangers improve to 41-19-5. The Penguins’ lone goal came six minutes into the final period from center Jeff Carter on the power play, but Andrew Copp’s first goal as a Ranger capped the scoring toward the end of regulation.

After Kreider made it a 4-0 game with his third shorthanded goal of the season, Penguins goalie Tristan Jarry was yanked for just the second time this season. Casey DeSmith came in relief for Jarry, but the backup collided with the Penguins’ Brian Dumoulin and headed to the locker room after logging 4:19. As a result, Jarry was forced to return.

“When we play our best hockey, it’s because we’re decisive,” Kreider said. “We’re moving our feet and taking away time and space and making it hard on the other team. I think that’s the biggest thing for this group.”