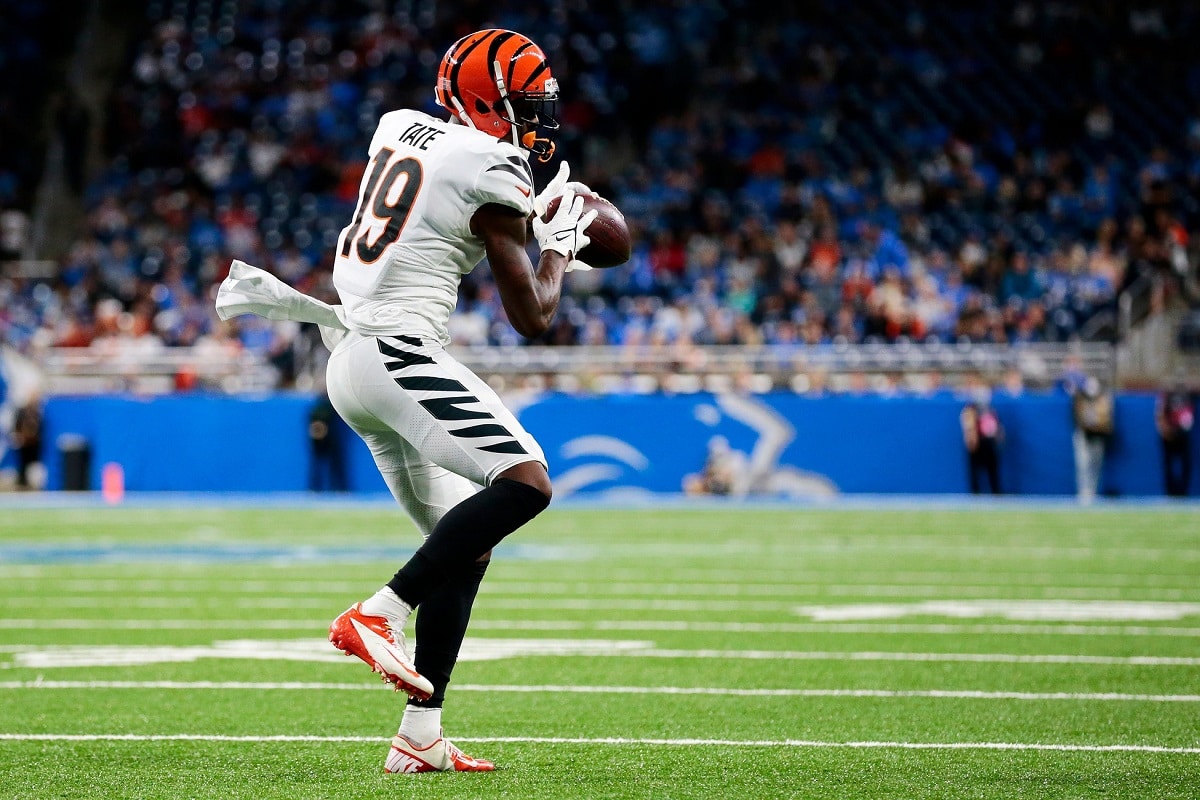 GM Ryan Poles isn’t making many friends among Chicago Bears fans with his rather bland approach to free agency. His only attempt at anything approaching a splash move was Larry Ogunjobi, and that fell through due to a failed physical. Since then, Poles has contented himself with a series of minor moves. All of them have the same thing in common. They check three key boxes.

It is clear the team isn’t looking for win-now options. They’re taking calculated chances on lesser names in hopes they might be able to continue growing. This is the typical approach of a team entering a rebuilding phase. Keeping this in mind, there are still some names out there that might fit the profile of what Chicago seeks.

Chicago Bears are or could be monitoring these guys

By the end of the 2019 season, the Cincinnati Bengals looked like they had a potential breakout star in the making with Tate. The former 7th round pick had 575 yards that season in just 12 games. Unfortunately, his progress was derailed over the next two years due to a mix of health issues and the ascent of other teammates, including Tee Higgins and, of course, JaMarr Chase. The kid is only 25-years old and presents an enticing target at 6’5 with strong hands for making tough catches.

A name the Chicago Bears are already aware of. They plan to meet with Bates on Tuesday in hopes of signing him. It isn’t hard to see why. The young blocker was terrific in 2021 for the Buffalo Bills, playing several different positions from left tackle to both guard spots. He was dominant at left guard, allowing four pressures on Josh Allen in six games. This guy might be scratching the surface of what he can do. Outbidding Minnesota and New England for his services might be tricky.

It was a surprise when the Baltimore Ravens let the 28-year old cornerback go. Young established himself as one of the best slot cornerbacks in the NFL over the past couple of seasons. His physical playstyle and nose for the football make him a perfect fit for the type of defense Matt Eberflus wants to run. The Tampa-2 scheme depends on that particular position quite a bit. Kenny Moore proved that in Indianapolis. Young will have other suitors but shouldn’t break the bank.

The Bears have said they want physical football players. Harrison has no problems filling that role. He loved to get after it for Alabama and then Jacksonville and Cleveland. His versatility often stood out, making big plays both in coverage and as an extra blitzer. The trick is getting him to play under control. Alan Williams should be able to help with that. Harrison can become that combination safety who drops into the box, allowing Eddie Jackson to do what he does best by playing center field. In terms of skillset, he is as close as the Bears would have since Adrian Amos left in 2019.