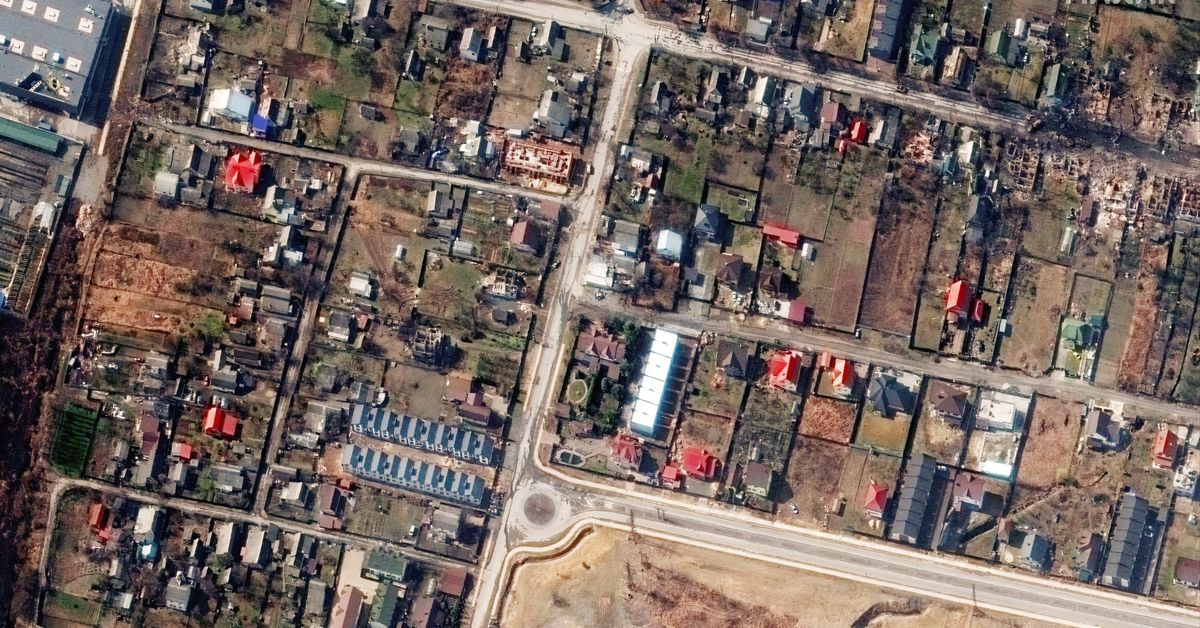 April 5 (Reuters) – Satellite images taken weeks ago of the town of Bucha in Ukraine show bodies of civilians on a street, a private US company said, undercutting the Russian government’s claims that Ukrainian forces caused the deaths or that the scene was staged.

Maxar Technologies provided nine images taken of Bucha on March 18, 19 and 31 to Reuters. At least four of the images appear to show bodies on one of the town’s roads, Yablonska Street. The city was occupied by Russian forces until about March 30.

Russian Foreign Minister Sergei Lavrov said the dead bodies were “staged” and that images of them and what he said was Ukraine’s false version of events had been spread on social media by Western countries and Ukraine.

Vasily Nebenzya, Russia’s envoy to the United Nations, said Moscow would present “empirical evidence” to the Security Council that its forces have not been killing civilians in Ukraine and were not involved in events in Bucha. L3N2W22CN

The Security Council is to meet later on Tuesday.

The New York Times, which was provided a separate set of images from Bucha by Maxar, analyzed the pictures in a story published April 4, comparing them to video taken at street level that showed the same scenes, and confirming the locations of the bodies. Its analysis, it said, confirmed the accuracy of the satellite images.

“High-resolution Maxar satellite imagery collected over Bucha, Ukraine (northwest of Kyiv) verifies and corroborates recent social media videos and photos that reveal bodies lying in the streets and left out in the open for weeks,” Maxar said in an e-mail to Reuters, which also included analysis of the images.

Ukraine authorities have accused Russian forces of carrying out a “massacre” in Bucha and say that 300 residents were killed there during a month-long occupation. Ukrainian troops re-took the town last week.

Jeffrey Lewis, a satellite imagery expert who has seen the Maxar images, described the process of deducing what the images meant as “very straightforward.”

“What the satellite images show is that the bodies were present while the Russians controlled the area,” said Lewis, who is director of the East Asia Nonproliferation Program at the Middlebury Institute of International Studies.

The Pentagon said on Monday it could not independently confirm the accounts of atrocities but had no reason to dispute them. read more

A Reuters reporter saw several dead civilians in the town, including one with his hands bound behind him. Local residents said hundreds of civilians had been killed. read more

“These are war crimes and will be recognized by the world as genocide,” Zelenskiy said, speaking on television from Bucha, wearing body armor and surrounded by military personnel. read more

The deaths in Bucha, outside Kyiv, drew pledges of further sanctions against Moscow from the West, possibly including some restrictions on the billions of dollars in energy that Europe still imports from Russia.