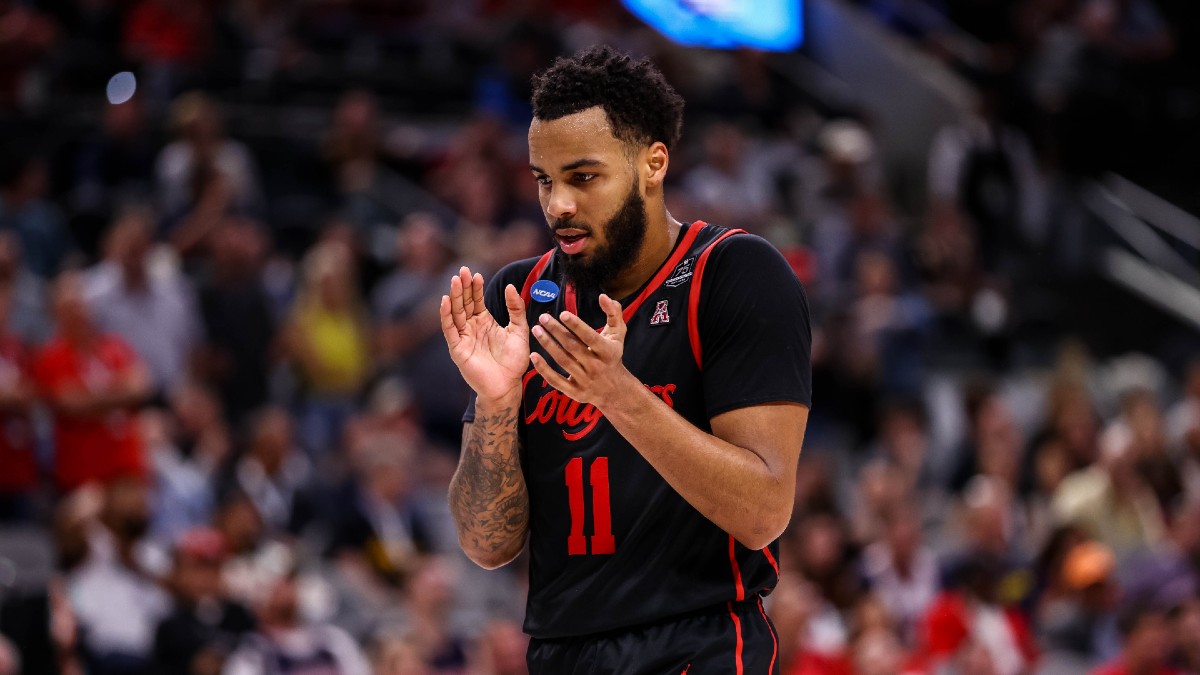 Houston might be a No. 5 seed according to the selection committee, but the Cougars are the best team remaining in the field, per KenPom and BartTorvik.

The Cougars have a chance to make a second consecutive Final Four on Saturday when they take on Villanova in San Antonio.

Houston made the Elite Eight by taking out both Illinois and Arizona — two better seeds — in dominant fashion. The defensive ball pressure, the offensive rebounding prowess and the athleticism shut down two potent offenses and enabled Houston to earn wire-to-wire victories over a consensus top-15 and top-five team in succession.

Villanova has also won and covered the spread in all three of its NCAA Tournament games, beating No. 15 seed Delaware before knocking out consecutive Big Ten teams in Ohio State and Michigan. The Wildcats’ wins were rarely in doubt as Villanova produced just enough offense to attempted comebacks from the Buckeyes and Wolverines.

The Wildcats haven’t faced a top-20 KenPom opponent since November, when they lost to Baylor, 57-36.

Villanova faced a challenging nonconference schedule, won the Big East Tournament and is a very experienced team. But it hasn’t seen a ball-pressure defense like the Cougars in a long time, and that’s where this matchup is likely to be decided.

Houston held Arizona to just 0.96 points per possession in their Sweet 16 contest on Thursday night, the third-lowest mark of the Wildcats’ season.

The Cougars used their elite offensive rebounding to control the pace and slow the game down to a halt. Once keeping Arizona from effectively running transition and forcing them to play in the half-court, the Wildcats’ turnover woes and inability to get to the rim easily shut down one of the nation’s most elite offenses.

Unlike Arizona, Villanova will be more than happy to make this a half-court game. Both teams live in the half-court offensively, and Villanova’s offense vs. Houston’s defense is the key battle in the game. I think the Cougars have multiple matchup advantages that can bother the typically elite motion offense run by the Wildcats.

Villanova’s offense forces teams to switch everything and then looks to take advantage of mismatches on the perimeter.

The Wildcats run a ton of ball screen action — 10th in pick-and-roll frequency — but the Cougars rank 15th in the country in pick-and-roll defense, per ShotQuality. One major reason for that is their ability to switch and not get exposed, as Michigan and Ohio State did in the last two games against Villanova.

The Wildcats love to shoot 3s and do so very effectively, but one staple of Kelvin Sampson’s teams has been elite 3-point defense. The Cougars guard the perimeter at the 10th-best rate in the entire country.

If there’s one area where Villanova can have success offensively, it’s at the free-throw line, as Houston fouls a lot because of its aggression. Villanova is the best free-throw shooting team of all-time.

But otherwise, Houston’s suffocating ball pressure can cause serious issues for Collin Gillespie and the rest of the Wildcats offense.

Villanova’s offense is usually one of the most well-run units in the entire country, but the Wildcats have struggled with teams that extend ball pressure this season.

The Wildcats defense did dismantle Tennessee in nonconference play, but the offense managed just 0.60 PPP against Baylor, 0.97 PPP at St. John’s and 1.03 PPP against the Red Storm in the Big East Tournament. All of those teams are elite at forcing turnovers and like to extend press on occasion, similar to Houston.

If a team can apply enough pressure to not let Villanova run its precise motion offense, it can make things very difficult for this group.

Because of their lacking size, the Wildcats also struggle to grab defensive rebounds and rank just 196th in that category. Houston’s elite offensive rebounding ability will produce second-chance points in a game that’s not going to have a lot of possessions.

The Wildcats have looked excellent in this tournament thus far, but both OSU and Michigan were matchups that favored the Villanova offense from a stylistic point of view. Neither were going to turn over Villanova, and neither had the ability to switch 1-5 that’s required to effectively guard them.

Houston is a much better perimeter defense than both, and even the ShotQuality reports can pour some cold water on the idea that Villanova is rolling right now.

Although the Wildcats won those two games by 10 and eight points, respectively, SQ had them as just a four- and two-point victory. Michigan missed a lot of layups, and Ohio State had some close rim-outs on excellent looks in the final minutes.

Those matchups were almost tailor-made for Villanova, but it’s going to have a much tougher time offensively on Saturday given the inability to get clean looks from the perimeter and the switching ability of the Cougars.

If this is a close game late, there’s one major area where Villanova has the advantage. The Wildcats shoot free throws better than any team in NCAA history, and the Cougars rank just 327th in free-throw percentage. That’s a scary thought for the Cougars in a game that’s lined at just two, meaning it’s expected to be closed in the final four minutes.

With that being said, Houston point guard Jamal Shead might be two inches shorter than Villanova’s Gillespie, but I’m expecting Shead’s athleticism and defensive progress to really cause issues for Gillespie. He’s one of the best perimeter defenders in the country.

Similar to how Baylor and SJU rattle Gillespie by pressing the ball all game long, Houston’s team defense can frustrate the Wildcats.

Houston’s offense isn’t always pretty and it doesn’t have a ton of shot-makers, but Villanova’s mediocre defensive rebounding numbers mean that Houston will win by its sheer volume of shots.

If the first or second chance doesn’t convert, Houston will get more shots up in this game. And even if they’re less efficient, the Cougars will book their place in the Final Four for the second consecutive year.

The market opened this at Houston -1.5, and it was immediately bet up to -2/-2.5. It’s since settled at the Cougars -2, as the market is finally showing the proper level of respect to Sampson’s bunch.

In a game between two elite coaches and two elite teams, Houston’s key matchup advantages are significant enough for me to lay two points. I wouldn’t lay more than two, as I expect this game to be closed.