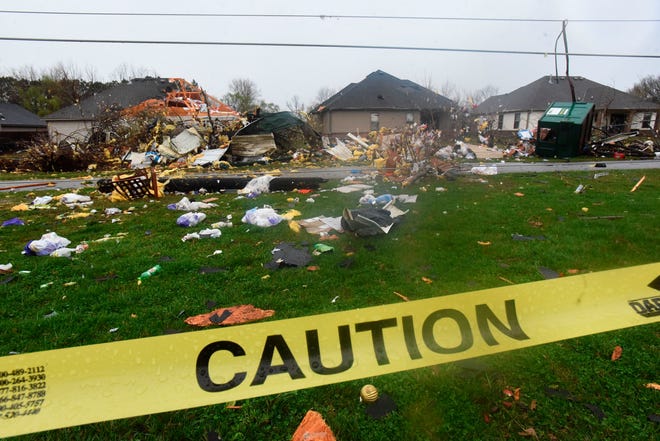 A wind-fueled Tennessee wildfire and a tornado that injured at least seven people in Arkansas were part of a violent day of weather across the South on Wednesday.

Damage was extensive, and included an elementary school gymnasium and a warehouse, KFSM-TV reported. The Springdale School District, which is the largest in Arkansas, canceled all classes Wednesday because of the storms.

In Tennessee, a 250-acre wildfire just north of Wears Valley burned at least 20 homes and other structures Wednesday, fueled by gusty winds, warm temperatures and low humidity, the National Weather Service said. At least one person was injured and, according to the Sevier County Emergency Management Agency.

Evacuations were ordered in some areas of the state.

WHAT IS A FLOOD WATCH OR WARNING? Here’s what to know about this deadly weather hazard

The Storm Prediction Center said all of Mississippi and parts of Alabama, Arkansas, Louisiana and Tennessee were at the greatest risk for severe weather Wednesday. The biggest concerns were strong tornadoes, some of at least EF-2 strength, and hurricane-force wind gusts of at least 75 mph.

Over 104 tornado warnings were issued by weather forecast offices over the past 24 hours, Accuweather reported.

Most of them came from Jackson, Mississippi, as stormed moved across the area, and appeared to have produced numerous tornadoes, according to the National Weather Service.

An EF-1 tornado with wind speeds around 90 mph also struck northwest Missouri overnight Tuesday. Two homes were damaged but no injuries were reported.

A tornado touched down Wednesday night in Perry County, Alabama, the weather service said. Another touched down near Bibb County, and officials warned it was “large and extremely dangerous.”

Alabama Power said over 50,000 customers had lost power as of Wednesday night as a result of the storms as more than 40 trees were reportedly blown down in Tuscaloosa County alone, Accuweather reported.

A tornado watch was issued for most of Arkansas, northern Louisiana, southern Missouri, southeastern Oklahoma, and northeast Texas through early Wednesday afternoon.

The main instigator for the severe weather will be a squall line of storms advancing from west to east across the South and lower Ohio Valley, according to Weather.com.

WHAT IS A TORNADO? Everything you need to know about these violent storms

“It is likely that the severe thunderstorms will move eastward at a swift pace Wednesday night and could be racing along at 50 mph or more. This fast motion may not allow people in the path of the storms much time to react and take shelter,” AccuWeather Meteorologist Ryan Adamson said.

The threat will last overnight, and nighttime tornadoes are a major possibility only a week after an EF-3 twister rampaged through New Orleans, killing one man.

Flash flooding will also be a concern Wednesday into the night, AccuWeather said, especially because rivers remain at fairly high levels after the last outbreak of rain and storms.

The storm threat was expected to last until Thursday farther east. “Severe thunderstorms are possible across Georgia and the central/eastern Florida Panhandle as well as over portions of the Mid-Atlantic states on Thursday, the Storm Prediction Center said.