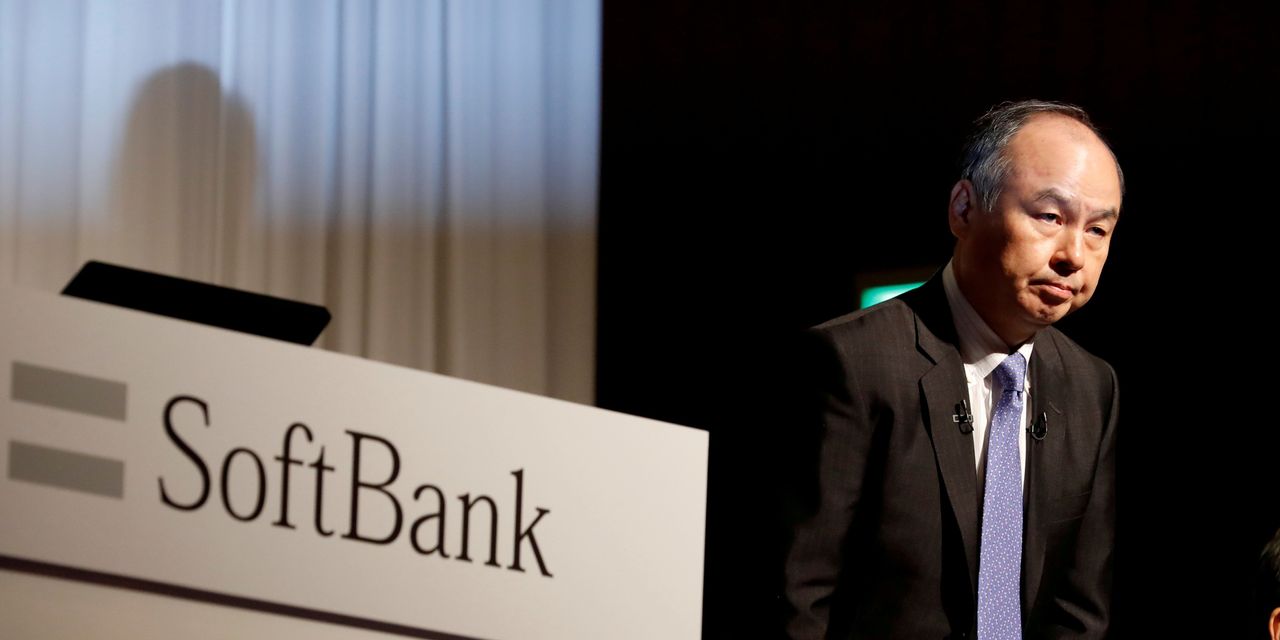 The turmoil in Chinese technology shares is damping the financial firepower Japan’s SoftBank 9984 -1.75%

Group Corp. has for new investments, and prompting debate about whether it might sell some of its huge stake in Alibaba BABA -1.88%

The Nasdaq Golden Dragon China Index of US-listed Chinese stocks has declined 52% over the 12 months through Friday. Alibaba has fallen 49%, and SoftBank’s Tokyo-listed stock has dropped 40%.

Falling valuations for its holdings have pushed SoftBank close to its self-imposed debt limit of a loan-to-value ratio of 25%, estimated David Gibson, a senior research analyst who covers the Japanese internet sector at MST Financial in Australia. That would imply limits on new borrowing, investments and share buybacks, Mr. Gibson said.

whose US-listed shares have fallen more than 70% from its offering price of $14 last summer. “SoftBank is constrained by capital now, and that’s because of not just Alibaba’s market-cap decline, but also the Vision Fund as well,” he said.

Founder Masayoshi Son has said SoftBank’s loan-to-value ratio, or net debt divided by the equity value of its holdings, should usually be 25% or lower. S&P Global Ratings in March said it expects SoftBank to manage the ratio at about 30%, by adjusting the pace of investment in its fund business.

Investors have been watchful recently for signs SoftBank could potentially sell part of its near-25% stake in Alibaba. SoftBank recorded a gain equivalent to $558 million in the last three months of 2021 after using what Mr. Son called a “tiny bit” of Alibaba stock to settle contracts.

“SoftBank might need to sell more of [its] Alibaba stock because they have a lot more funding needs going forward,” said Atul Goyal, an analyst covering tech, games and telecommunications at Jefferies. A SoftBank spokeswoman declined to comment on listed holdings.

In its quest to fund new investments, Mr. Son’s company has in recent years already raised tens of billions of dollars backed by shares in the Chinese e-commerce giant and some of SoftBank’s other listed holdings, while stopping short of an outright sale.

In April through December 2021, SoftBank said it had raised a net $6.9 billion of asset-backed financing using Alibaba shares. It has also raised funds against its holdings in T-Mobile US Inc.,

Overall, asset-backed financing using Alibaba stock was valued at the equivalent of about $25.8 billion at the end of 2021, SoftBank said last month, equivalent to about 35% of its Alibaba holding.

The funding is obtained partly through margin loans, and partly through prepaid forward contracts. The contracts are agreements in which banks or brokers pay SoftBank upfront, and it agrees to settle the obligation later, either in stock, cash or a mixture.

The contracts could be one way in which SoftBank reduces its stake in Alibaba. However, they don’t commit SoftBank to selling any shares in future, and how it chooses to settle could depend on issues such as its liquidity and Alibaba’s share price.

Do you think volatility in the Chinese stock market will affect SoftBank’s ability to raise funds? Why or why not? Join the conversation below.

Some deals set minimum prices for shares used to settle the contract, while others set both a minimum and a maximum. A recent SoftBank presentation said the use of forwards “hedges against a fall in share price below the floor price.”

Alibaba’s contribution to SoftBank’s overall net asset value has fallen sharply, to 24% as of December 2021, down from a peak of 60% in September 2020. The figures exclude Alibaba shares that have been used for fundraising.

Despite the pullback, Alibaba remains among the most successful investments for SoftBank, which started with a $20 million investment in the Hangzhou, China-based company in 2000. “I think Alibaba is still a great company,” Mr. Son said in February.

A recent intervention by Chinese policy makers to restore market confidence, and a move by Alibaba to increase its buyback program to a record $25 billion, have helped the Chinese company’s shares recoup most of their year-to-date losses.

—Megumi Fujikawa contributed to this article.

Write to Dave Sebastian at dave.sebastian@wsj.com