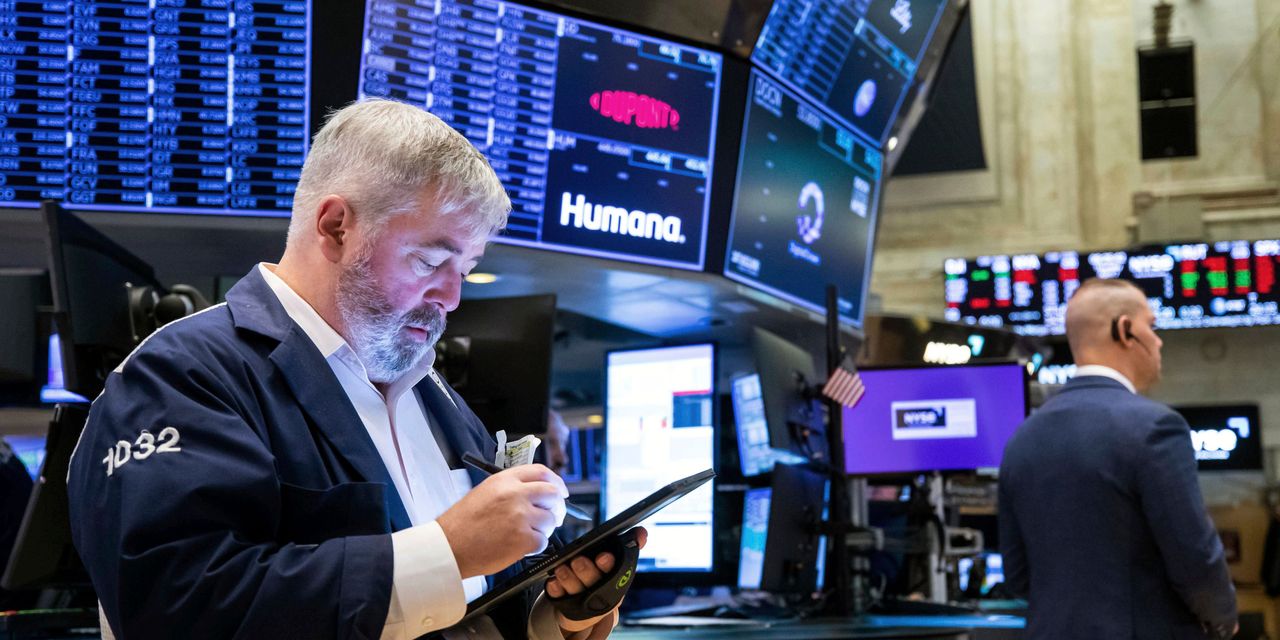 Uncertainty about Federal Reserve policy and the war in Ukraine pushed the S&P 500 to a weekly loss and stoked a selloff in the government bond market.

All three major indexes ended the week with losses. The S&P 500 snapped a three-week winning streak that had sent it toward its best performance since November 2020, losing 1.3%. The Dow and Nasdaq lost 0.3% and 3.9%, respectively.

Meanwhile, the yield on the benchmark 10-year Treasury note jumped to the highest level since March 2019 as bond prices tumbled.

Throughout the week, investors remained preoccupied with commentary from Federal Reserve officials as well as the minutes from the central bank’s March policy meeting, Those minutes showed that policy makers had considered raising interest rates and unwinding its balance sheet faster, driving stocks lower.

Federal Reserve Bank of St. Louis President James Bullard said Thursday that the central bank is behind on its mission to tame inflation and will likely have to act fairly forcefully to get price pressures under control.

The swings in assets across the market highlight how murky the path of the economy remains for many investors, who are trying to pick the winners and losers of the rising interest-rate regime and grappling with surging commodity prices world-wide.

“The Fed has been the number-one story and that continues,” said James Athey, an investment manager at Abrdn.

“The effect of the sort of tightening that has been discussed, that has a history of being very destabilizing.”

A rapid jump in bond yields has led some investors and analysts to wonder whether the rise in yields will chip away at stock returns, and at what point investors will opt to ditch stocks in favor of bonds. Some investors have grown worried that the central bank’s interest rate hikes will drive a recession just two years after the US exited the last downturn.

“Although yield levels are still fairly low, if they rise fast enough, can equities withstand such a monetary shock?” wrote Jim Paulsen, chief investment strategist at the Leuthold Group, in a note to clients on Thursday.

Mr. Paulsen said that in the last three months, yields have risen faster than nearly 97% of all three-month periods since 1950. Still, he said, stocks have typically done well when the 10-year Treasury yield has been below 3% and until it rises to around 4%.

Some tech heavyweights that had rebounded lately pulled back in recent sessions. Amazon.com shares lost 5.6% this week, while Google-parent Alphabet shed 4.9%. The tech-heavy Nasdaq badly underperformed its peers, continuing a trend from earlier in the year.

Investors have also had to analyze mixed signals stemming from different parts of the market. The bond market, for example, was recently flashing a signal that a recession may be on the horizon. And transportation stocks, which are often viewed as an indicator of the health of the economy, have been tumbling.

has fallen 11% to start the month, while the Dow industrials broadly are up about 0.1%. Companies that operate things like trains and planes tend to see higher demand when consumers are ramping up spending on travel and other goods and the economic outlook is brighter.

The war in Ukraine has also continued to weigh on markets. Allegations of war crimes by Russian troops against civilians prompted a new round of sanctions from the US and the European Union this week. The United Nations General Assembly on Thursday voted to suspend Russia from its Human Rights Council.

Despite the recent volatility and signals from the bond market, major indexes have rapidly ascended from their lows in March. The S&P 500 has gained 7.6% since its March low in a broad-based rally. Some investors have said that stocks remain attractive even though Treasury yields have jumped.

“If you want to grow your buying power over the next 10 years, I can’t think of a better place to do it than equities,” said Dev Kantesaria, founder of Valley Forge Capital. “We have been buying more of the companies that are in our portfolio. We are close to 0% cash.”

A pre-markets primer packed with news, trends and ideas. Plus, up-to-the-minute market data.

In commodities, prices for palladium and platinum jumped after the body that oversees London’s market for the metals said it would bar metal produced by two major refining companies owned by the Russian government. Meanwhile, the United Nations on Friday said global food prices hit a record high in March.

Oil prices edged lower, with global benchmark Brent crude dropping for the second consecutive week to trade at $102.78 after losing 1.5%. Traders are assessing the impact of sanctions and self-sanctioning measures by energy companies on Russian oil exports and the release of strategic reserves by member nations of the International Energy Agency.

Write to Anna Hirtenstein at anna.hirtenstein@wsj.com and Gunjan Banerji at gunjan.banerji@wsj.com