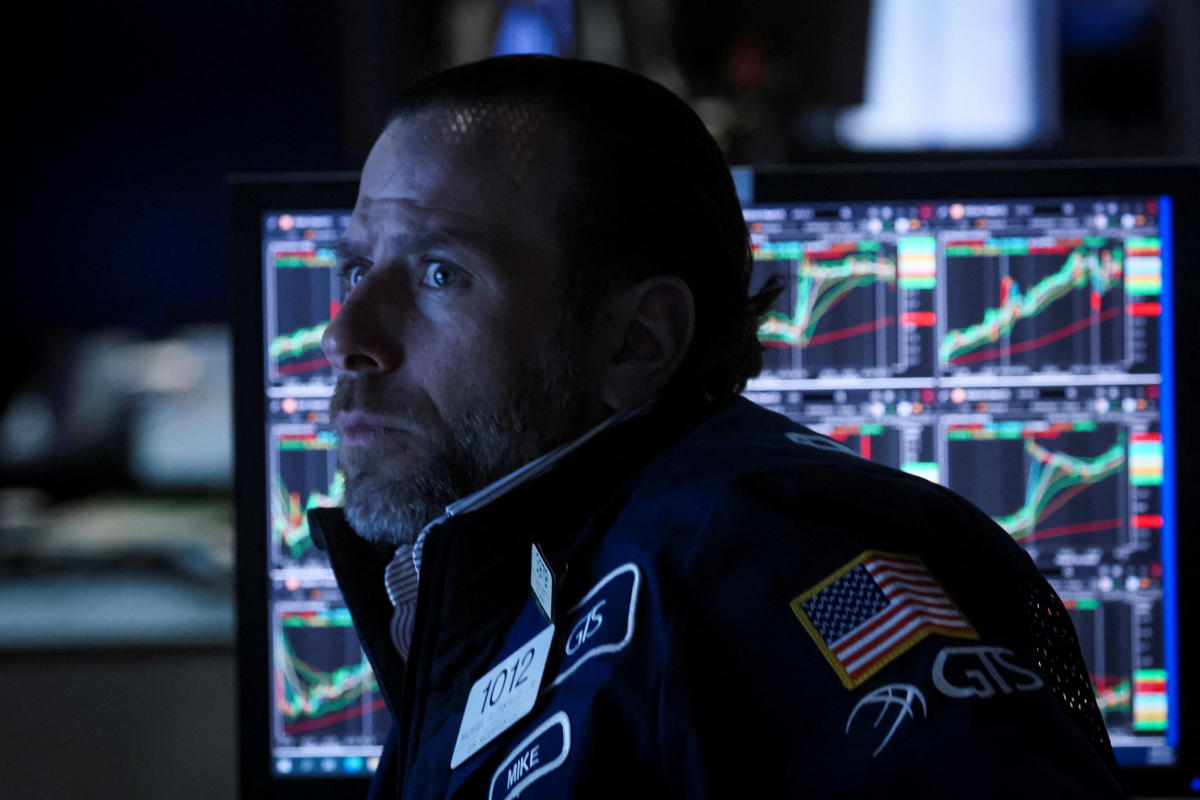 US stocks struggled for direction Thursday after capping a four-day rally to close lower in the previous session amid a backdrop of faded optimism around Russia-Ukraine ceasefire negotiations and mixed economic data.

The S&P 500 ticked down about 0.2%, and the Dow Jones Industrial Average dipped 100 points. The Nasdaq Composite edged 0.2% lower. The moves come after the S&P 500 and Dow each snapped a four-day winning streak on Wednesday. The Nasdaq has lost momentum after closing at its highest levels since mid-January on Tuesday. Oil prices fell sharply early Thursday after swinging higher in the previous trading day for the first time in three sessions as hopes of a deescalation to the war in Eastern Europe waned. WTI crude oil futures dropped 4.7% to about $103 per barrel.

Russian forces continued attacks on Kyiv and northern Ukraine despite reports Moscow pledged to ease its military action in the areas during peace talks in Istanbul earlier this week. As of Wednesday, the number of people in Ukraine who have fled their homes to escape the invasion and seek safety reached 4 million, according to the United Nations.

Stocks have had a turbulent start to the year as a number of headwinds — geopolitical turmoil, rising inflation, supply chain imbalances, and central bank monetary tightening — roil financial markets. Still, the S&P 500 is up 11% from its lowest level of the year in early March as of Tuesday’s close and just 4% shy of notching a new all-time high after a recent comeback. Based on more than seven decades of data, the momentum is likely to continue even despite some day-to-day choppiness.

“The good news is stocks really appear to love April,” LPL Financial chief market strategist Ryan Detrick said in a note, pointing out the month has closed green every year since 2006 except for 2012. “Not only is it the best month on average since 1950, but it has also been higher an incredible 15 of the past 16 years as well.”

Despite a reassuring outlook for the month ahead, another historical track record has been worrying market participants. Investors are nervously eyeing a flattening US Treasury yield curve, with longer-duration bond yields falling more sharply than those on the short end as traders bet on higher rates from the Federal Reserve in the near-term and weigh a clouded macroeconomic outlook over the longer -term.

The spread, or difference, between the 2-year and 10-year Treasury note yields narrowed to its lowest level since 2019 earlier this week and briefly inverted on Tuesday. The phenomenon has a history of predicting a recession, with each of the last eight recessions dating back to 1969 preceded by a yield curve inversion.

“We want to make sure we don’t get too focused on the yield curve issues where some folks are thinking that’s signaling a recession,” JoAnne Feeney, Advisors Capital Management partner and portfolio manager, told Yahoo Finance Live, however. “We think it’s very dangerous at this point to use historical episodes of yield curve inversion to try to predict what will happen now.”

Feeney pointed to near-record high job openings (the Labor Department’s Job Openings and Labor Turnover Summary [JOLTS] came in at 11.283 million in January) and said the US economy is still coming out of COVID and COVID-type behavior.

More jobs data is underway this week. The Labor Department’s weekly jobless claims due out Thursday is expected to show initial unemployment claims again near a 50-year low, with consensus economists forecasting a reading of 196,000, according to Bloomberg data. Jobless claims will serve as a prelude to the even more consequential monthly unemployment report for March on Friday, expected to show another robust reading of 490,000 payrolls added, per Bloomberg economist estimates. In a busy week for labor market reports, ADP also reported Wednesday private sector payrolls rose by 455,000 in this past month as the economy faced ongoing labor shortages and widespread vacancies.

9:30 am ET: Stocks struggle for direction after capping 4-day rally

Applications for unemployment insurance were up slightly in the latest weekly data after reaching a more than 50-year low as employers continued to show reluctance in reducing their workforces in the current competitive labor market.

The Labor Department latest weekly jobless claims report showed 202,000 claims were filed in the week ended March 26, coming in above the 196,000 economists surveyed by Bloomberg had expected.

The labor market has remained a point of strength in the US economy, with job openings still elevated but coming down from record levels as more workers rejoin the labor force from the sidelines.

8:26 am ET: Walgreens tops estimates on boost from Omicron-led rush of vaccines, tests

Walgreens Boots Alliance Inc. (WBA) revealed better-than-expected quarterly profit and sales for its fiscal second-quarter earnings thanks to high demand for COVID-19 vaccinations and testing during the Omicron-led surge in COVID-19 cases earlier this year .

The company’s US pharmacy, however, fell 3.3% in the quarter, hurt by a weak performance in its mail-order AllianceRx Walgreens business. Total sales rose 3% to $33.77 billion, beating estimates of $33.40 billion.

Here were the main moves in markets ahead of Thursday’s open: