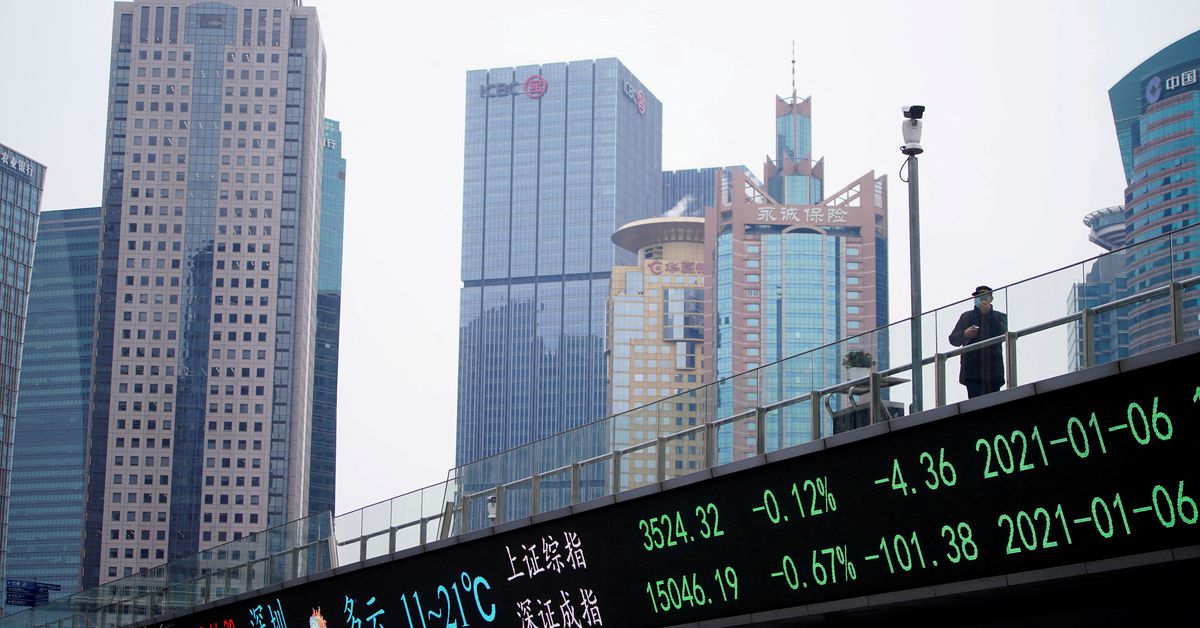 LONDON/NEW YORK, March 30 (Reuters) – The US and European equities rally paused on Wednesday as investors took stock of economic and geopolitical risks, while oil prices jumped back around $4 on the prospect of more Russian sanctions.

The broad Euro STOXX 600 (.STOXX) fell 0.6% after three positive sessions that had taken the index back to levels reached before Russia invaded Ukraine.

The relative cheer among stock investors contrasted with the circumspection in the bond market, where some investors are betting aggressive tightening of policy by the US Federal Reserve could harm the world’s biggest economy over the longer term.

“I’m very worried that US equities do not price any risk of slowdown in the US economy – that is extremely worrying,” said Ludovic Colin, a senior portfolio manager at Swiss asset manager Vontobel.

The widely tracked US 2-year-10-year Treasury yield curve briefly inverted on Tuesday for the first time since September 2019.

“Equity markets are overly optimistic and the fixed income markets are probably being overly pessimistic.”

An inverted Treasury curve has in recent decades been followed by a recession within two years, including the 2020 downturn caused by the COVID-19 pandemic.

A day after rising above 0% for the first time since 2014, Germany’s two-year bond yield was up six basis points at 0.01% – keeping the previous day’s highs in sight.

Shares rallied in Asia overnight after Ukraine proposed on Tuesday it adopt neutral status, a move seen by investors as a sign of progress in face-to-face peace negotiations. read more

On the ground, however, reports of attacks continued and Ukraine reacted with skepticism to Russia’s promise in negotiations to scale down military operations around Kyiv.

MSCI’s broadest index of Asia-Pacific shares outside Japan (.MIAPJ0000PUS) jumped 1.46% to its highest in nearly a month, with most Asian stock markets in positive territory.

The benchmark US 10-year yield was last at 2.3762% , having risen as high as 2.557% on Monday for its highest since April 2019, as traders positioned themselves for quick-fire increases to US interest rates.

The impact of rising US yields played out elsewhere, dragging Japanese government bond yields in their wake in a threat to Japan’s ultra-loose monetary policy.

The Bank of Japan increased efforts to defend its key yield cap on Wednesday, offering to ramp up buying of government bonds across the curve, including unscheduled emergency market operations. read more

The widening gap between US and Japanese yields has caused the yen to weaken sharply, but it managed to regain some lost ground on Wednesday.

The Japanese currency rose 0.9% to 121.80 per dollar , compared with Monday’s low of 124.3, amid concerns Japanese authorities might step in to bolster the yen.

Elsewhere in currency markets, the euro rose 0.6% to $1.1157, its highest in four weeks, supported by the Russia-Ukraine peace talks.

In energy markets, oil prices jumped around $4 on supply tightness and the growing prospect of new Western sanctions against Russia even as Moscow and Kyiv held peace talks.