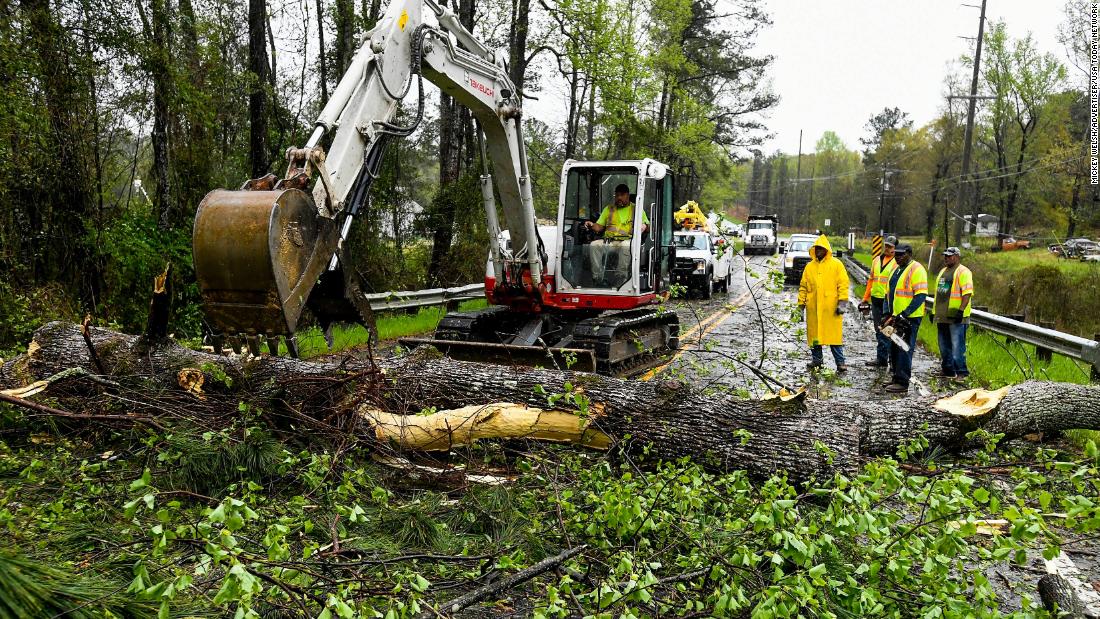 More than 35 million people were at some level of risk for severe storms Tuesday, especially from the Gulf Coast states into the Carolinas, but also from northeast Oklahoma into Missouri, the Storm Prediction Center said.

In East Texas, a middle-aged man was killed Tuesday morning in the community of Whitehouse, southeast of Tyler, when a tree fell on an RV where he was staying as a storm came through, the Smith County emergency management coordinator said.

The victim’s name was not released. The county was assessing damage to the area after reports of several trees down on homes and trees on roads, the coordinator, Jay Brooks, said.

The most serious risk — a level 3 of 5 — exists for more than 4.8 million people in parts of the Florida Panhandle, southern and eastern Alabama, middle and southern Georgia and parts of South Carolina, the center said.

Storms and tornadoes battered parts of the South on Tuesday. The Storm Prediction Center said there were 31 tornado reports from Mississippi to South Carolina as of 5:45 pm ET.

At least five possible tornadoes were reported in Mississippi, downing trees in Jefferson Davis and Covington counties northwest of Hattiesburg, as well as in Newton and Scott counties east of Jackson, the National Weather Service said.

Downed trees and power lines near the southwestern Alabama community of Coffeeville also might have been caused by a tornado, the weather service said.

The following cities will see their greatest chance of severe storms from 4 to 10 pm ET: Tallahassee, Florida; Savannah, Georgia; Charleston, South Carolina; and Charlotte, Raleigh and Wilmington in North Carolina.

Storms cause damage in Texas

Storms battered parts of Texas on Monday night into early Tuesday, with winds damaging some homes and businesses outside Dallas-Fort Worth, and in one instance flipping over an RV trailer, CNN affiliate WFAA reported.

Amber Zeleny’s husband had just helped her daughter get out of the trailer when it flipped more than once in their house’s backyard west of Egan, a Johnson County community about a 20-mile drive south of Fort Worth, WFAA reported.

The trailer appeared to roll over him, and he was sent to a hospital with injuries, but he told a reporter he was OK, according to WFAA.

“I’m standing at the front door watching everything, and I’m like ‘Oh my God,'” Zeleny told WFAA.

Aerial video from WFAA showed roof damage to buildings in rural parts of Johnson County as well as in Collin County, just northeast of Dallas.

Four people were rescued Monday night from fast-moving floodwaters in McKinney, Texas, about 30 miles north of Dallas, officials said. The McKinney Fire Department said on Twitter it carried out three separate water rescues. No one was injured.

More severe weather possible in the South on Wednesday

The severe weather is the latest in a series of storm systems that have battered the southern US for three weeks straight.

Many of the same areas that have seen severe weather over the past few weeks will under threat again over the week ahead, the Storm Prediction Center’s Bill Bunting told CNN.

“The very moist air flowing northward from the Gulf of Mexico, which has helped the storms develop over the last few weeks, is once again what we will see this week,” Bunting said.

By Wednesday, a separate system will form, bringing another round of storms to the South and extending the severe threat for another day. The highest risk — a level 3 of 5 — covers about 10 million people in Atlanta; Birmingham and Tuscaloosa in Alabama; and Chattanooga, Tennessee, the prediction center said.

By Thursday, the threat diminishes, as the storms push off the East Coast. While the system is primarily bringing storms to the South, we will still see rain Thursday for much of the Eastern Seaboard.

Anywhere from Florida to New England will see rain, so Wednesday and Thursday could bring a few travel delays at some major airports as this system moves through.