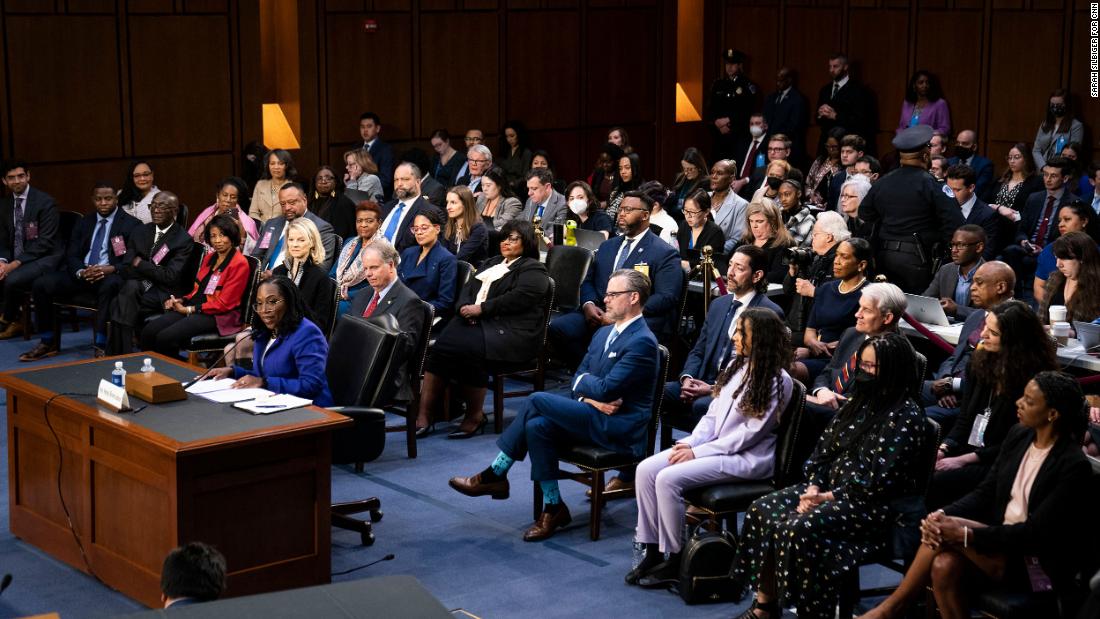 The hearings kicked off on Monday with opening statements from senators on the panel and the nominee. Two days of questioning — expected to be the most contentious part of the public vetting process on Capitol Hill — got underway Tuesday morning and will continue through Wednesday.

Democrats have so far used the hearings to praise Brown — who would be the first Black woman to serve as a Supreme Court justice — as an exceptionally qualified, trail-blazing nominee whose depth and breadth of experience, including as a federal public defender , would add a valuable and unique perspective to the bench.

In contrast, Republicans have attempted to portray her as weak on crime by zeroing in on some of her past defense work as well as by broadly attempting to connect her to criminal justice policies they argue have fueled a rise in crime. Republicans have raised questions over what constitutes Jackson’s judicial philosophy as they warn against activism, and prescribing policy outcomes, from the bench. And they have also criticized support for the nomination from left-wing groups.

Jackson had a chance on Monday to formally introduce herself as she spoke about her family history and gratitude over the nomination. Tuesday’s hearing gave her a chance to respond to the pointed questions, and critiques, outlined by Republican senators.

On Tuesday, senators may ask questions of the nominee for 30 minutes each, according to the schedule outlined by the committee. There are 11 Democrats and 11 Republicans on the panel and the questioning is likely to stretch late into the evening.

On Wednesday, lawmakers will be allowed 20 minutes each for a second round of questioning.

Jackson said on Tuesday that she approaches her work in such a way so as to ensure impartiality and does not impose personal opinions or policy preferences, an assertion that comes as Republican senators have expressed concerns over judicial activism.

“I have developed a methodology that I use in order to ensure that I am ruling impartially and that I am adhering to the limits on my judicial authority,” Jackson said.

“When I get a case, I ensure that I am proceeding from a position of neutrality,” she said.

“I am not importing my personal views or policy preferences,” she added.

The first day of hearings offered lawmakers on both sides of the aisle a chance to preview arguments they are likely to return to during their rounds of questioning.

Democrats highlighted Jackson’s credentials and the historic nature of her nomination and mounted a defense against Republicans’ arguments that she is weak on crime.

“We’ve heard claims that you are ‘soft on crime.’ These baseless charges are unfair,” Senate Judiciary Chairman Dick Durbin, a Democrat from Illinois, said during Monday’s hearing.

“I’m confident the American people will see through these attacks and any other last-minute attempts to derail your confirmation,” he said.

He said pointedly that there are two types of nominees who have worked on criminal cases: “Bill of Rights attorneys, who want to protect defendants’ constitutional rights,” and “criminal defense lawyers, who disagree with our criminal laws.”

“Of course, that’s a very important difference,” he said.

Other Republicans on the panel were more forceful and direct in previewing lines of attack against the nominee.

As a public defender, Jackson represented a Guantanamo Bay detainee, but it’s her advocacy for detainees while she worked at a private firm that Republicans are particularly skeptical of.

“I’m a bit troubled by some of the positions you’ve taken and arguments that you’ve made representing people who have committed terrorist acts against the United States and other dangerous criminals,” Sen. John Cornyn, a Texas Republican, said on Monday.

Prior to the hearing starting this week, Republican Sen. Josh Hawley of Missouri had raised concerns about Jackson’s record on sentencing in child pornography cases — a highly charged subject he returned to Monday.

An in-depth CNN review of the material in question after Hawley initially outlined his criticisms shows that Jackson has mostly followed the common judicial sentencing practices in these kinds of cases and that Hawley took some of her comments out of context by suggesting they were opinions, rather than follow-up questions to subject-matter experts.

It has become a norm among judges to issue sentences below the guidelines in certain child pornography cases that don’t involve producing the pornography itself. The guidelines are viewed as out-of-date by many judges, particularly for how they treat the use of computers and other elements that can enhance an award under the guidelines.

“Some have said that the federal sentencing guidelines are too harsh on child sex crimes, especially child pornography,” Hawley said on Monday. “I’ll just be honest, I can’t say that I agree with that.”

A group of retired federal judges — including two Republican appointees — told the Senate Judiciary Committee on Monday night that Jackson’s record on child pornography sentencing is “entirely consistent” with the records of other judges across the country.

The White House and Senate Democrats have also pushed back in defense of Jackson.

“In the vast majority of cases involving child sex crimes, the sentences Judge Jackson imposed were consistent with or above what the government or US probation recommended,” White House press secretary Jen Psaki said last week.

“She comes from a law enforcement family, has devoted her career for standing up for the rule of law, which is why she is endorsed by so many leading law enforcement organizations in the country. And attempts to smear or discredit her history and her work are not borne out in facts,” PSAKI added.

What’s next after confirmation hearings conclude

Democrats can confirm Jackson to the high court on the strength of their narrow Senate majority, with 50 votes and Vice President Kamala Harris breaking a tie. The party does not need any Republican support for successful confirmation, but if any Republicans do vote to confirm, it would give the White House a chance to tout a bipartisan confirmation.

It’s not yet clear, however, whether Jackson will receive any votes from Republicans.

When the Senate voted to confirm her last year to fill a vacancy on a powerful DC-based appellate court, three Republican senators voted with Democrats in favor: Lindsey Graham of South Carolina, Susan Collins of Maine and Lisa Murkowski of Alaska.

This story and headline have been updated with additional developments Tuesday.

CNN’s Alex Rogers and Tierney Sneed contributed to this report.