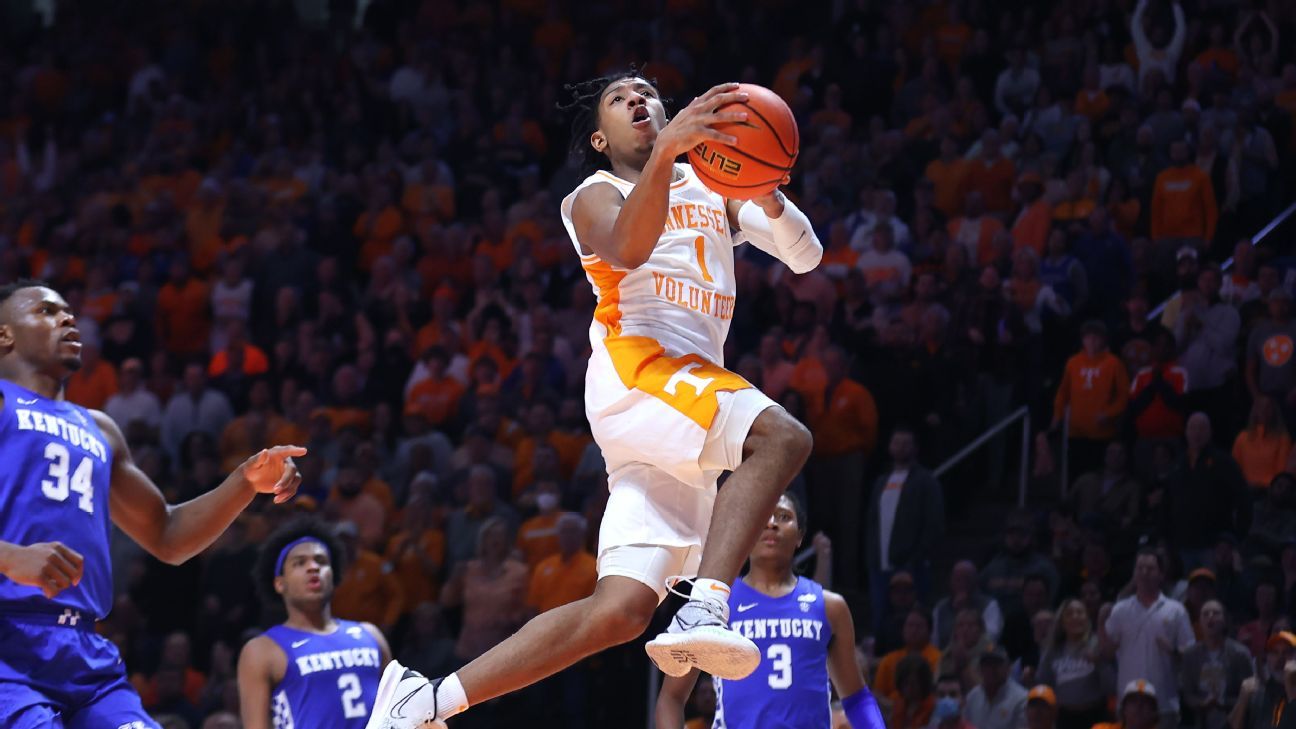 Tennessee freshman Kennedy Chandler will enter the 2022 NBA draft and forgo his remaining college eligibility by hiring an agent, he told Malika Andrews on ESPN’s NBA Today on Tuesday.

“I am staying in the NBA draft and signing with agent Ryan Davis of Rep 1 Sports,” Chandler told ESPN.

Chandler, the No. 17 prospect in the ESPN 100, was named second-team All-SEC and all-freshman team after averaging 13.9 points, 4.7 assists and 2.2 steals in 31 minutes per game this season.

Tennessee won its first SEC tournament championship since 1979, with Chandler being awarded MVP honors. Chandler spearheaded a Vols defense that ranked No. 3 in the nation, per Ken Pomeroy’s ratings, helping the team finish 27-8.

Chandler, a top-10 recruit out of Sunrise Christian Academy, came into college battle-tested, having led his high school team to the finals of the Geico national championship and then won a gold medal with USA Basketball at the FIBA ​​U19 World Championship. He had some ups and down over the first few months of the season, with Tennessee playing a challenging schedule and Chandler struggling at times against some of the best defenses he faced early on.

“I learned a lot this season, from start to finish,” Chandler said. “I knew it was going to be hard and that Coach [Rick] Barnes would put together a tough schedule. I learned a lot, especially from that loss to Texas at the end of January, especially with me not being in the game at the end. I feel like I really started to grow after that and that changed the type of player I am after a heart-to-heart I had with TJ Ford.”

Chandler emerged as arguably the best point guard in college basketball in the months of February and March, helping Tennessee win 13 of its last 15 games, while becoming more of a vocal leader, shooting 47% from 3-point range, improving his midrange game and playing lockdown defense thanks to his quickness and 6-foot-5 wingspan.

“Adjusting to the speed of the college game was the big thing early on. Coach Barnes had me watching a lot of Chris Paul and Tony Parker film. Learning how to make different reads, and understanding that every team is going to have a different game plan. I am lucky to have a close relationship with Ja Morant, which helped me. Being able to pick his brain about what he sees in the game and how he sees it. Also Trae Young, as we’re both part of the MoKan [Nike EYBL team] family. Those two gave me valuable advice.”

Chandler is appealing to NBA teams thanks to his ballhandling skill, ability to play at different speeds and quick first step, which allows him to get virtually anywhere he wants on the floor. The improvements he showed as the season moved on as a shooter and defender raise his floor as an NBA prospect, as does the success he found at the college level.

“I want to show NBA teams how much stronger I will get through the pre-draft process,” Chandler said. “Being ready to play with physicality in the NBA, a 6-foot guard like me can play with anybody in the league. Just being coachable, cerebral, that’s how I can separate myself in this process.”

Jonathan Givony is an NBA draft expert and the founder and co-owner of DraftExpress.com, a private scouting and analytics service used by NBA, NCAA and international teams.