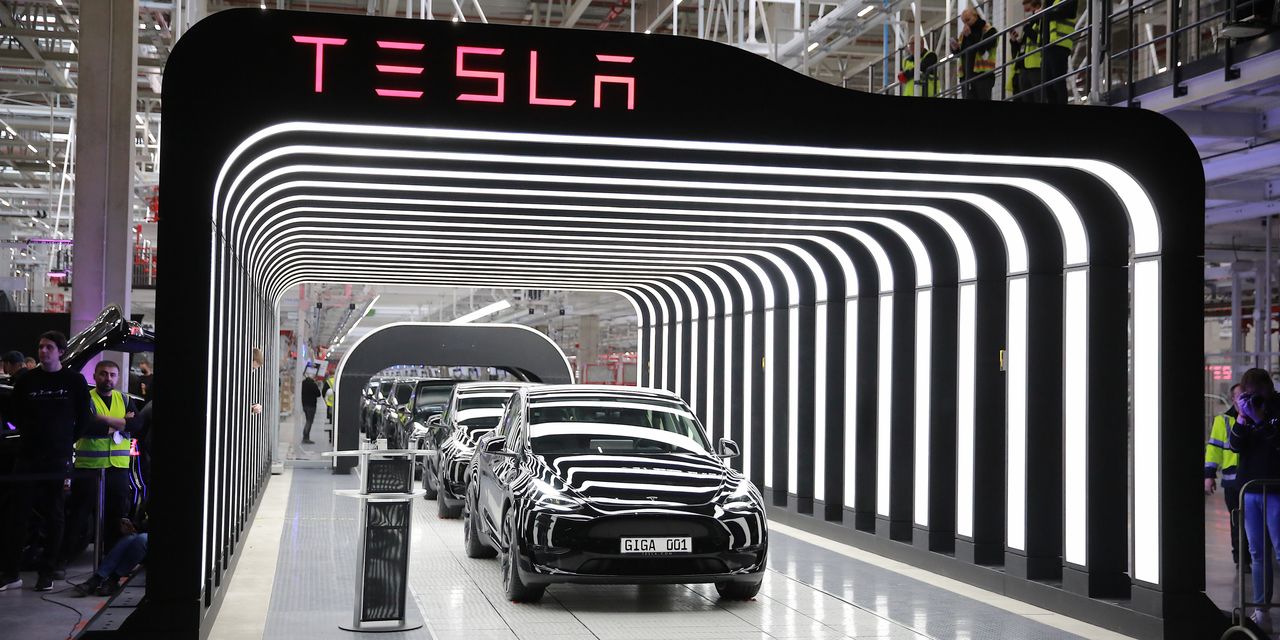 Model S Plaid can go from 0 to 60 in just two seconds. Tesla’s stock can gain more than 30% in less than two weeks.

Tesla (ticker: TSLA) has been on an absolute tear, rising for eight consecutive days, its longest winning streak since January 2021. The stock gained 32% over that span, putting it over $1,000 and its market cap above $1 trillion for the first time since January 2022. The streak ended Friday, when Tesla fell 0.3%, closing the week at $1,010.64.

It was an epic run, but one that’s not easy to explain. Such moves don’t tend to happen in other ultra-large-cap stocks. The largest eight-day gain in either

(AMZN) since the start of 2021 was a 19% gain in Amazon stock, which also happened this month. And Tesla run-ups don’t always seem to line up precisely with fundamentals, frustrating bulls and bears. What’s more, big gains and big losses often mean the stock doesn’t really go anywhere—Tesla, after all, is up just 3% over the past three months, though that’s better than the

Still, Tesla doesn’t tend to move without a reason, even if the reason is sometimes obscure. To understand why the stock is gaining now, it helps to understand why it was dropping before the move. Future Fund Active ETF manager Gary Black blames the Federal Reserve for Tesla’s recent trading volatility. He notes that Tesla stock dropped 32% from late November, when the Fed suddenly turned hawkish, through March 14, a period that saw the S&P 500 and


Nasdaq Composite
fall about 12% and 22%, respectively. Two days later, the Fed raised rates by a quarter-point, and it was off to the races. “Sell the rumor, buy the news,” says Black.

But that points to another issue for Tesla—inflation. That’s the reason the Fed has had to raise rates, and it’s something that is threatening the profit margins of Tesla and a host of other businesses. In fact, Tesla’s decline coincided with the price of a basket of metals used in lithium batteries doubling, adding as much as $2,500 to the price of an average EV—and forcing many EV makers to increase prices. Citigroup analyst Jeff Chung has counted more than a dozen price increases from Chinese EV makers in recent months, including from Tesla.

But since mid-March, inflationary fears have dissipated and been replaced by growth expectations. Tesla opened its much-delayed German manufacturing facility this past week to much fanfare, something that removed an overhang and likely contributed to the move in Tesla’s shares, according to New Street Research analyst Pierre Ferragu.

A bigger deal than Berlin is expectations for Tesla’s first-quarter deliveries, which are likely to be reported on Saturday, April 2. Wall Street expects deliveries to come in between 310,000 and 320,000 vehicles, up about 10,000 from earlier in the quarter. Tesla delivered 309,000 vehicles during the fourth quarter of 2021. Even those estimates might be too low, according to Wedbush analyst Dan Ives, who expects deliveries are trending “well ahead of Street expectations.”

Rising delivery expectations are as good a reason as any for an auto stock to rise. Now Tesla just needs to deliver.

A Tesla Model S Plaid can go from 0 to 60 in two seconds. An earlier version of this article incorrectly called the vehicle a Model 3 Plaid.

Write to Al Root at allen.root@dowjones.com