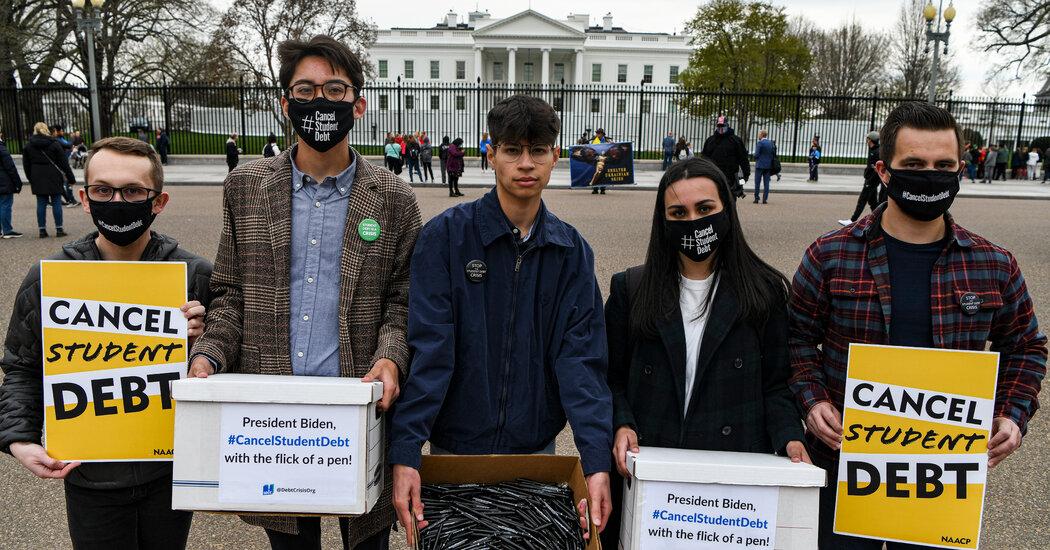 Such comments have left debt-cancellation advocates torn between optimism and frustration. “If they’re not going to do it, that gives false hope to borrowers,” said Natalia Abrams, the founder of the Student Debt Crisis Center, a nonprofit advocacy group.

The timing of the restart — just two months before the midterm elections — sets up another political quagmire for Democrats, said Lanae Erickson, the senior vice president for social policy for Third Way, a moderate Democratic think tank that supports some targeted student loan debt relief but not broad cancellation efforts.

“There’s obviously a huge amount of pressure, including from the Senate majority leader, to just cancel student loans,” Ms. Erickson said. “The payment pause has just become inextricably linked with the canceling student loan conversation and makes it all the more politically dicey for the administration.”

With inflation running at its fastest pace in 40 years, the extension could add fuel to the hot economy by keeping money in the hands of consumers who can spend it. That poses a further challenge, as strong consumer demand has collided with constrained supply chains, labor shortages and a limited supply of housing to push prices higher.

The Federal Reserve in March raised interest rates for the first time since 2018, and it is expected to make an even larger increase in May as it tries to slow spending and bring price gains under control. While the extension’s effect is probably very small, it could make the Fed’s job harder, at the margin, as it tries to cool off demand.

The decision to extend, rather than resume or cancel payments, points to disagreement within the White House on how the loan payments might affect the economy and voters, Ms. Erickson said.

“The fact we’re seeing almost quarterly extensions at this point is likely indication there’s two forces pulling in opposite directions and this is the best they could come up with at this point,” she said.