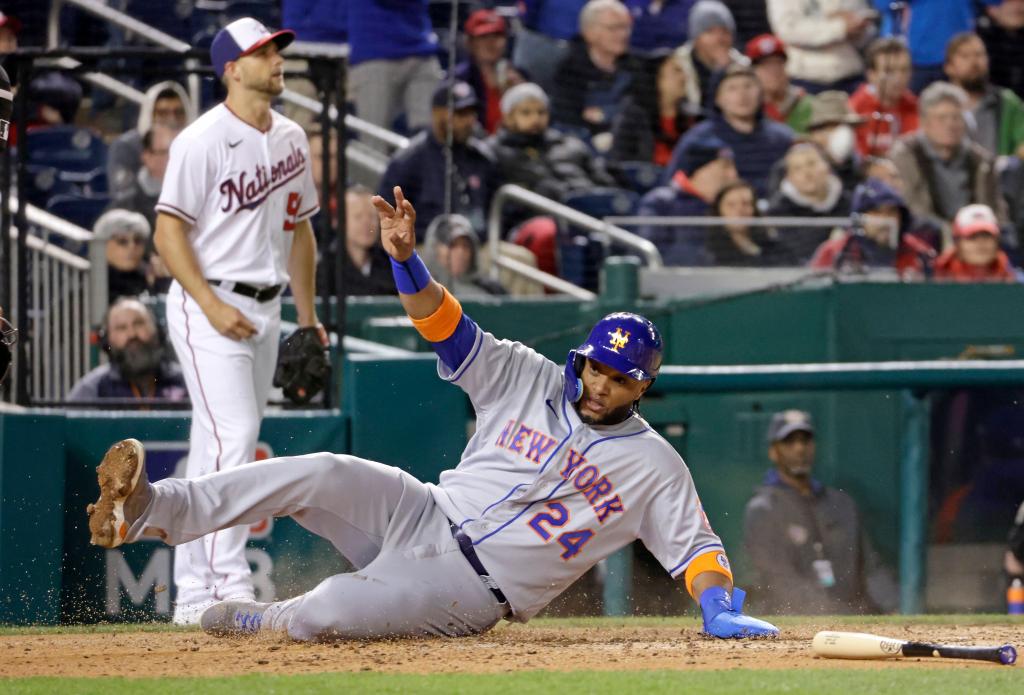 With Megill’s fastball popping and extended innings from their lineup in vogue, the Mets rolled to a 5-1 victory at Nationals Park and continued the franchise’s Opening Day dominance. The Mets improved to 40-21 all-time in openers for a .656 winning percentage that is by far MLB’s best.

Megill got the Opening Day assignment only because Jacob deGrom hit the injured list and Max Scherzer needed an extra day for his tight hamstring. Resembling the pitcher who helped carry the Mets rotation for about a two-month stretch last season, Megill fired five shutout innings and allowed three hits with six strikeouts. The right-hander peaked at 99 mph in the first inning and kept his fastball in the 97-98 mph range for most of his outing.

Offensively, the Mets were 4-for-11 with runners in scoring position, a decent look for a team that has struggled in that category in recent seasons.

Robinson Cano and Mark Canha each reached base three times on a night the Mets survived on two extra-base hits.

Showalter, hired in December as Mets manager, returned to the dugout in a game that counted for the first time since departing the Orioles after the 2018 season.

Megill had thrown only 68 pitches and retired eight straight batters, but was removed to begin the sixth instead of facing the top of Washington’s batting order for the third time. Trevor May entered and allowed Juan Soto’s 99th career homer, a solo blast on a 96 mph fastball that stayed over the plate. Adam Ottavino, Seth Lugo and Edwin Diaz combined to hold the Nationals scoreless over the final three innings.

Megill had won a battle against Soto in the third inning, striking out the slugger with runners on the corners and one out before retiring Nelson Cruz. In the previous frame Megill got Makiel Franco to hit into an inning-ending double play, exonerating Francisco Lindor for a throwing error.

Offensively, the Mets got rolling in the middle innings. Already ahead 2-0, they received an RBI single in the sixth from Canha, after Pete Alonso had singled for the second time in three innings. Jeff McNeil’s two-out RBI single against Austin Voth buried the Nationals in a four-run hole. Lindor’s RBI single in the seventh, after JD Davis’ leadoff double, gave the Mets a 5-1 lead.

James McCann took a Patrick Corbin slider off the back foot for a hit by pitch with the bases loaded in the fifth to give the Mets their first run of the new season. Starling Marte’s RBI fielder’s choice extended that lead to 2-0 before relieving Victor Arano got JD Davis to hit into an inning-ending double play.

Cano spurred the inning with a leadoff bunt single to third base against the shift and Canha walked before McNeil’s single to center loaded the bases.

Alonso got nailed at the plate attempting to score from first on Eduardo Escobar’s double for the final out of the fourth. Alonso should have easily scored, but stumbled rounding third base and then appeared to be running uphill for the final 45 feet. Alonso had reached on a two-out single against Corbin before Escobar hit a shot to the left-center gap.

In the first inning, Marte — who swiped 47 bases last season — got nailed by catcher Keibert Ruiz attempting to steal second after a leadoff single. Davis followed with a walk before Corbin got the next two outs.