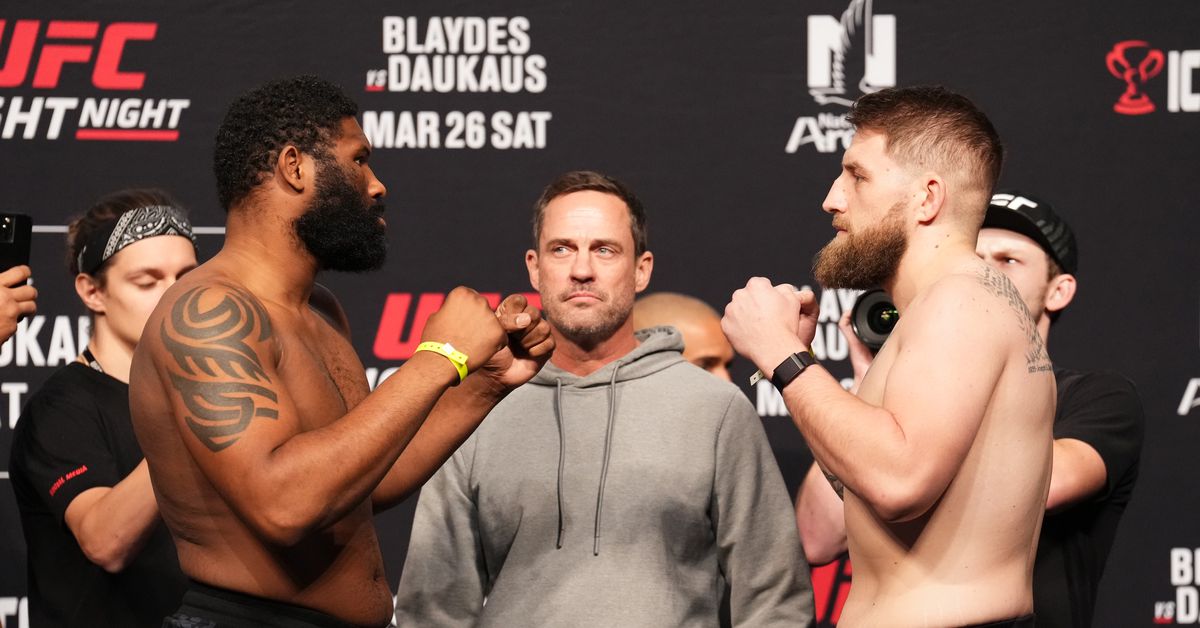 Join us here at Bloody Elbow for live results, discussion, and play-by-play (main card) as UFC Columbus: Blaydes vs. Daukaus goes down in the Nationwide Arena in Columbus, Ohio.

The main event for this fight night will feature some big men, with Curtis Blaydes and Chris Daukaus facing off with a possible heavyweight title shot at sake. The co-main goes down at women’s flyweight with Jojo Wood meeting Alexa Grasso.

This will be an ESPN+ show but will be kicking off a little earlier than usual. The seven-fight preliminary card is scheduled to start at 4pm ET/1pm PT on ESPN+. The six-fight main card is also on ESPN+, and that is supposed to start at 7pm ET/4pm PT. Full odds are available at DraftKings Sportsbook.

Round 1 – Borshchev gets backed up to the cage immediately. Diakiese is trying hard to get the takedown but can’t. They reverse positions a couple of times. Borshchev opens up with punches. Diakiese again looks for a takedown. He finally gets it. Borshchev with an elbow from the bottom. Borshchev gets up but is thrown back to the mat. Back up again. Back down again. He’s in side control. Borshchev gets full guard back. 10-9 Diakiese.

Round 3 – Low kicks from Borshchev. Diakiese with the power double and gets the takedown. The crowd is getting restless. He’s stuck in Borshchev’s guard. Borshchev finally gets up. And goes right back down. Another emphatic body lock takedown. Up. Down. Rinse. Repeat. Ten total takedowns. 10-9 and 30-27 Diakiese.

Chris Gutierrez def. Danaa Batgerel by TKO (spinning backfist and strikes) at 2:34 of round 2