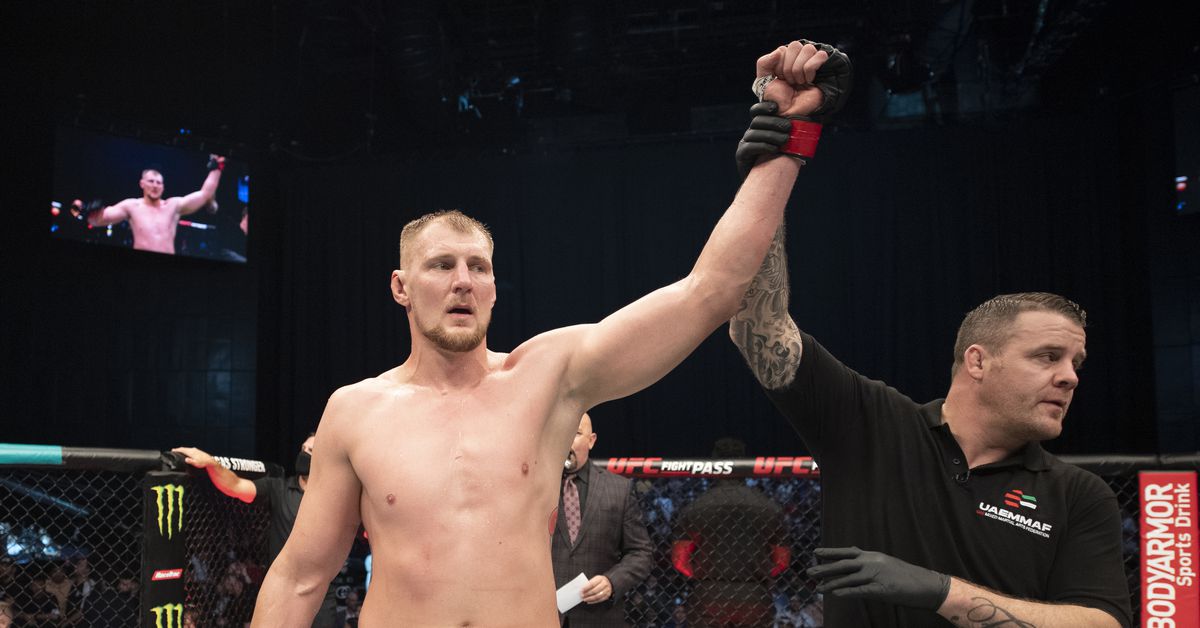 The UFC is back in Merry England and there’s plenty of homegrown fighters for the locals to cheer for.

At the very top, Tom Aspinall gets his chance to break into the heavyweight top 10 when he takes on seasoned vet Alexander Volkov in Saturday’s UFC London main event. Aspinall has gone 4-0 in the UFC with four finishes to claim the No. 12 spot in MMA Fighting’s Global Rankings and the No. 7 next to Volkov’s name could be next.

At 28, Aspinall is a relative spring chicken compared to some of the stalwarts that have populated the heavyweight charts for the past few years. He’s beaten a former UFC champion in Andrei Arlovski and dispatched of his similarly seasoned peers, but he’s yet to take on a relevant heavyweight contender like Volkov. The towering Russian is a literal tall task for any aspiring champion and Aspinall’s first UFC main event could turn out to be a learning lesson rather than a step forward in line.

Arnold Allen faces Dan Hooker in the co-main event, a featherweight contest that will tell us plenty about where each man’s career is heading. For Allen, he looks to go 9-0 in one of the UFC’s deepest divisions; for Hooker he returns to 145 pounds to breathe new life into a UFC run that has already seen him fight the best lightweights in the world.

In other main card action, the popular Paddy Pimblett fights Kazula Vargas in a lightweight contest, Gunnar Nelson returns from a hiatus of over 900 days to fight Takashi Sato at welterweight, flyweights Molly McCann and Luana Carolina battle to rise up the ranks, and Jai Herbert welcomes Ilia Topuria to the lightweight division.

Where: The O2 in London

When: Saturday, March 19. The six-fight preliminary card begins on ESPN+ at 1:30 pm ET, followed by a six-fight main card on ESPN+ at 4 pm ET.

You’ve got to be well-rounded to get past Alexander Volkov and Tom Aspinall is better at mixing the martial arts than most fans probably think. That’s understandable given that only one of Aspinall’s first four UFC fights has gone past the halfway mark of round one. If he’s been wanting to prove he’s not just a heavy-handed puncher, he’s been doing a terrible job of it!

But Aspinall has a legit jiu-jitsu background, which he showed glimpses of along with his wrestling when he submitted Andrei Arlovski. His grappling will be a major factor here especially when you take into account Volkov’s standup skills.

Volkov has an outstanding jab and is excellent at controlling range. Many of his wins have come just from the fact that his opponents can’t figure out how to effectively close the distance. Whether Aspinall can clear that hurdle or not will show us how far he has to go to become a legitimate threat to challenge for a UFC title.

Spurred on by the London crowd, Aspinall will take his licks and power through, mucking the fight up and putting the pressure on Volkov. An early finish is always likely when you’re talking about two high-level heavyweights, but I see Aspinall winning an entertaining war of attrition and pulling away in the later rounds to take it on the cards.

If Arnold Allen has been searching for that signature win, this is it.

Despite winning his first eight UFC fights, “Almighty” has yet to capture the imagination of the MMA masses. Maybe it’s because he’s been stricken by setbacks that have kept him from competing regularly, maybe he’s missing that big name on his resume, maybe he needs a spectacular viral finish, or maybe it’s some combination of those three factors. Hooker is rarely in a boring, unmemorable fight, so if Allen can’t manufacture some kind of moment here, it might never happen for him.

I like Allen’s chances a lot, not just because he’s a top-shelf athlete with a complete skill set, but also because I’m not convinced that a move down to featherweight will be some sort of cure-all for Hooker (or a cure -anything, for that matter). Keep in mind, it’s not like Hooker was a world beater when he originally competed at 145 pounds. Aside from an impressive finish of Hatsu Hioki, he suffered odd losses to future BKFC star Jason Knight and Maximo Blanco (remember that guy?). All the evidence we have suggests that Hooker was a better fighter at lightweight.

That doesn’t mean he’s not good enough to beat Allen. Hooker is a better, smarter fighter than he was five years ago; however, he’s also more shopworn and that’s where you have to give Allen the edge. If Hooker is diminished at all from his wars at 155 pounds, it’s difficult to imagine him keeping up with this next generation of 145ers. He still has plenty of Fight of the Night awards ahead of him, but it’s Allen who will continue to rack up wins and that includes Saturday’s assignment.

This should be an easy win for Paddy Pimblett, so long as we get more Cage Warriors champion Pimblett and less BKFC wannabe Pimblett.

Kazula Vargas is the right test for Pimblett at this stage of his career, a good kickboxer with a solid chin who will give Pimblett a real fight if he chooses to stand and trade in the center of the octagon. He has serious limitations on the ground and that’s where Pimblett should shine. When he’s put on his back, Vargas’ defense is primarily composed of him hunting for guillotine chokes, which won’t be effective against a grappler like Pimblett.

Look for Pimblett to be the aggressor with the takedowns, frustrating Vargas and then opening him up with ground-and-pound. From there, Pimblett will either find a choke of his own or pour on the strikes for the TKO finish.

Credit to Takashi Sato for stepping up here as a replacement for Claudio Silva and saving this fight, but this should be a showcase for Nelson. Sato is susceptible to submissions and while I expect Nelson to get loose on the feet early and show off his karate stylings, it’s on the ground where this matchup will be decided.

If Nelson can avoid Sato’s throws and be the first to take top position, it’s going to be a short night for Sato. While I’m sure Nelson will savor being back in action after such a long layoff, he’s not going to mess around once he sees an opening for a submission.

He puts Sato away in the first round and then perhaps we can re-book that Silva fight.

Molly McCann has a simple plan: Move forward and never stop punching. That’s going to make for an intriguing clash of styles with Luana Carolina, who you know will aim to use her reach advantage to keep McCann at bay.

Fighters have outranged McCann before, though in her most recent fight with Ji Yeon Kim she appeared to have found a winning formula of backing her opponent up as much as possible before flurrying. It helps that McCann has an iron chin, because she often gets cracked while slinging punches. It’s just that she’s confidant she’ll do more damage in the long run.

Carolina is no stranger to dealing with aggressive opponents, so McCann may want to be more methodical than usual lest she get chewed up by Carolina’s jab. I think McCann has better punching power than Carolina’s recent opposition though, so she gets the job done here with another crowd-pleasing performance.

In his most recent outing, Jai Herbert finally got to show off the slick hands and feet that made him a fan favorite in the Cage Warriors promotion. Ilia Topuria has a stiff test ahead of him as he embarks on his lightweight journey.

Herbert compliments an impressive 77-inch reach with a lot of lateral movement. It won’t be easy for Topuria to corner Herbert so he can land those body shots he’s so fond of. However, he only needs a few good ones early to let Herbert know he’s serious about striking.

In the grappling department, the edge definitely goes to Topuria, and given that he will regularly be at a size disadvantage in his new division, we could see him grow more dependent on his wrestling. It’s definitely something to consider against Herbert, a tricky standup fighter with loads of knockout power.

This matchup seems ripe for an upset, but I’ll go with Topuria if he can mix his wrestling with tight combinations for three rounds. He’ll win a decision or score a late finish.