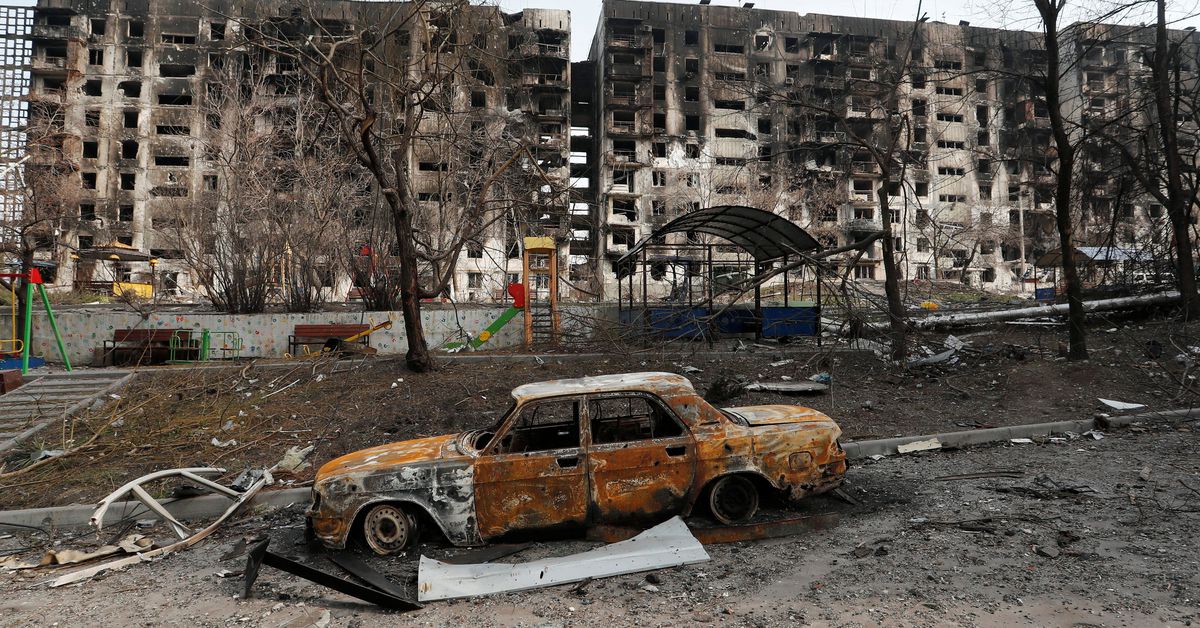 LVIV, March 31 (Reuters) – Ukrainian forces are preparing for new Russian attacks in the southeast region where Moscow’s guns are now trained after its assault on the capital Kyiv was repelled, President Volodymyr Zelenskiy said on Thursday.

Five weeks into an invasion that has blasted cities into wastelands and created more than 4 million refugees, US and European officials said Russian president Vladimir Putin was misled by his generals about the dire performance of Russia’s military. read more

Tough resistance by Ukrainian forces has prevented Russia from capturing any major city, including the capital Kyiv, which it assaulted with armored columns from the northwest and east.

Moscow says it is now focusing on “liberating” the Donbas region – two southeastern provinces partly controlled by separatists Russia has backed since 2014.

In an early morning video address, Zelenskiy said Russian troop movements away from Kyiv and the northern city of Chernihiv were not a withdrawal but rather “the consequence of our defenders’ work”.

Ukraine was seeing “a build-up of Russian forces for new strikes on the Donbas and we are preparing for that,” he said.

That includes Mariupol, once a city of 400,000 people, where most buildings have been damaged or destroyed in four weeks of constant Russian bombardment and siege. A convoy of Ukrainian buses set out for the port city on Thursday to try to reach trapped civilians, Deputy Prime Minister Iryna Vereshchuk said.

The United Nations believes thousands of people have died there, many buried in unmarked graves.

The past week has seen a Ukrainian counter-offensive, recapturing destroyed suburbs of Kyiv and strategic towns and villages in the northeast and southwest. Russia declared on Monday that it was scaling back its offensive near the capital and the city of Chernihiv in the north, in what it called a trust-building gesture for peace talks.

Russia says it launched a “special military operation” to disarm and “denazify” its neighbour, and that the mission is going to plan.

Western countries say the invasion was an unprovoked war of aggression, that Russia’s true aim was to swiftly topple the government in Kyiv, and that its failure has been a strategic catastrophe, bringing economic ruin and diplomatic isolation.

US officials have declassified intelligence which they said showed a rift between Putin and his advisors, who failed to warn him of the poor performance of his military or the economic impact of Western sanctions.

“We have information that Putin felt misled by the Russian military, which has resulted in persistent tension between Putin and his military leadership,” Kate Bedingfield, White House communications director, told reporters during a press briefing on Wednesday.

“We believe that Putin is being misinformed by his advisers about how badly the Russian military is performing and how the Russian economy is being crippled by sanctions, because his senior advisors are too afraid to tell him the truth.”

A senior European diplomat said the US assessment was in line with European thinking. “Putin thought things were going better than they were. That’s the problem with surrounding yourself with ‘yes men.'” the diplomat said.

Military analysts have described Russia’s announcement of a focus on the Donbas as an attempt to reframe its war goals to make it easier for Putin to claim a face-saving victory. Denis Pushilin, the Russian-backed separatist leader in the Donbas province that includes Mariupol, said on Wednesday offensive operations were intensifying.

All previous efforts to reach Ukrainian-held parts of Mariupol with aid or buses to evacuate civilians have failed. On Thursday, however, Ukraine said it was now sending a relief convoy through a humanitarian corridor with the backing of the Red Cross, which had secured agreement with the Russians.

In Russian-held parts of Mariupol people occasionally climb out of cellars to appear, ghostlike, among the ruins.

Pavel was placing a bowl and spoon as a tribute on a makeshift grave, in a patch of grass outside a wrecked apartment block, marked with a plain wooden cross.

“Our friend. March 16. Driving in a car. A bullet hit him in the throat. He was dead in five minutes,” he said. “I was in the car. I brought him home.”

Three older women sat bundled in coats at a picnic table outside the basement where they shelter. One was slicing a cabbage on some old newspaper.

“There’s no food, no water, no gas,” said Viktor, hovering over a makeshift wood stove on the basement steps nearby. “We cook what we find among neighbours. A bit of cabbage, a bit more of potatoes, we’ve found tomato paste, some beetroot.”

Western sanctions imposed on Russia as punishment for its invasion have largely isolated its economy from world trade, but Moscow is still the biggest supplier of oil and gas to Europe.

The United States is considering releasing up to 180 million barrels of oil over several months from its Strategic Petroleum Reserves (SPR) to ease upward pressure on prices, two US sources said. Oil prices fell more than $5 a barrel on Thursday on the news. read more

International Energy Agency (IEA) member countries were set to hold an emergency meeting on Friday at 1200 GMT to decide on a collective oil release, a spokesperson for New Zealand’s energy minister said on Thursday.

Russia has demanded European payments for its gas be made in rubles by Friday, raising fears of energy shortages. Germany has warned of a possible emergency if Russia cuts supplies. read more

A German government spokesperson said Putin had told Chancellor Olaf Scholz on Wednesday that payments could still be made in euros to Gazprombank, a bank affiliated with the Russian gas export monopoly, which would convert the money to roubles.

However, the Russian business newspaper Kommersant said Gazprom was looking into shutting off supplies: “Gazprom … is indeed working on an option of a complete stoppage of gas supplies to ‘unfriendly countries’ and is evaluating the consequences of such measures,” it wrote. read more