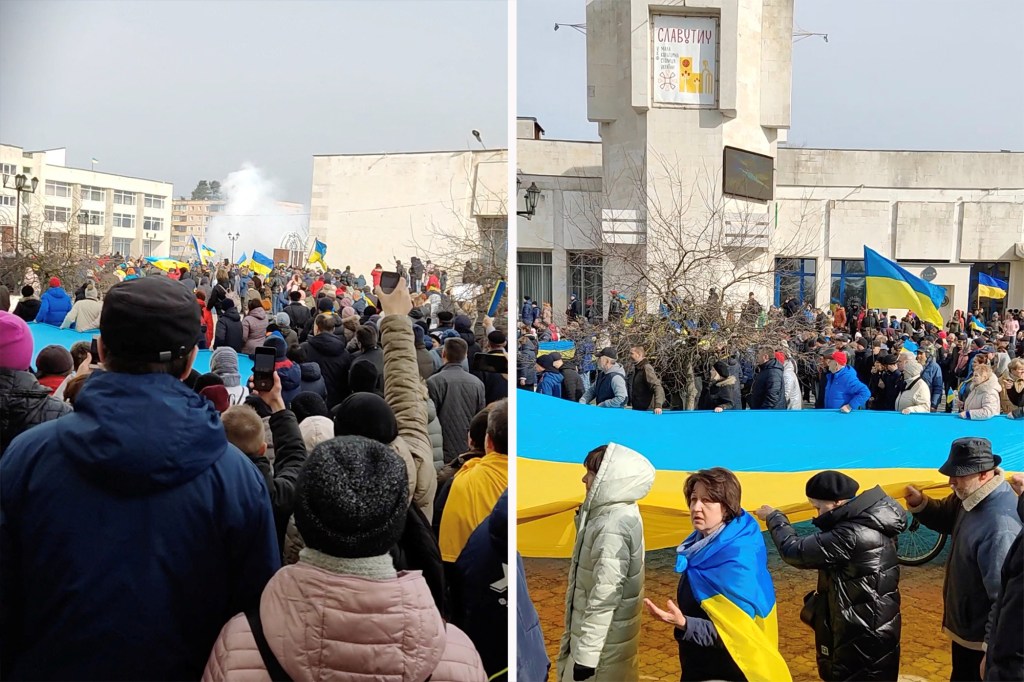 Russian forces entered the northern Ukrainian city of Slavutych and seized a hospital there Saturday, taking the mayor hostage, and then releasing him as thousands of residents filled the streets in protest and pushed the troops back to the outskirts of town.

The city had seen little violence since the start of the war a month ago, but shelling was reported there Friday. The town, about 100 miles north of Kyiv near the Belarus border, was built after the 1986 Chernobyl disaster to house the nuclear power plant’s workers.

Oleksandr Pavlyuk, the head of the Kyiv Regional Military Administration, said in a post on the messaging app Telegram Saturday that the Russians also kidnapped and then released the city’s mayor, Yuri Fomichev.

The governor said that hundreds of residents of Slavutych carrying a giant Ukrainian flag filled the streets around the commandeered hospital to protest the Russian invasion.

“The Russians opened fire into the air,” he said. “They threw flash-bang grenades into the crowd. But the residents did not disperse, on the contrary, more of them showed up,” Pavlyuk said.

Fomichev addressed the crowd after he was released, local journalists reported.

“In captivity, I negotiated with the occupiers,” Fomichev told the crowd, according to a video confirmed by the New York Times. “It was agreed that if it is confirmed that our military is not in the city, everything will be calm.”

“Slavutych remains under the Ukrainian flag!” he said.

But he added that Russian forces had instructed people to hand over weapons, and said that the national police and the Ukrainian military were no longer in the city, “so we will appoint people on duty to prevent looting, chaos and disorder.”