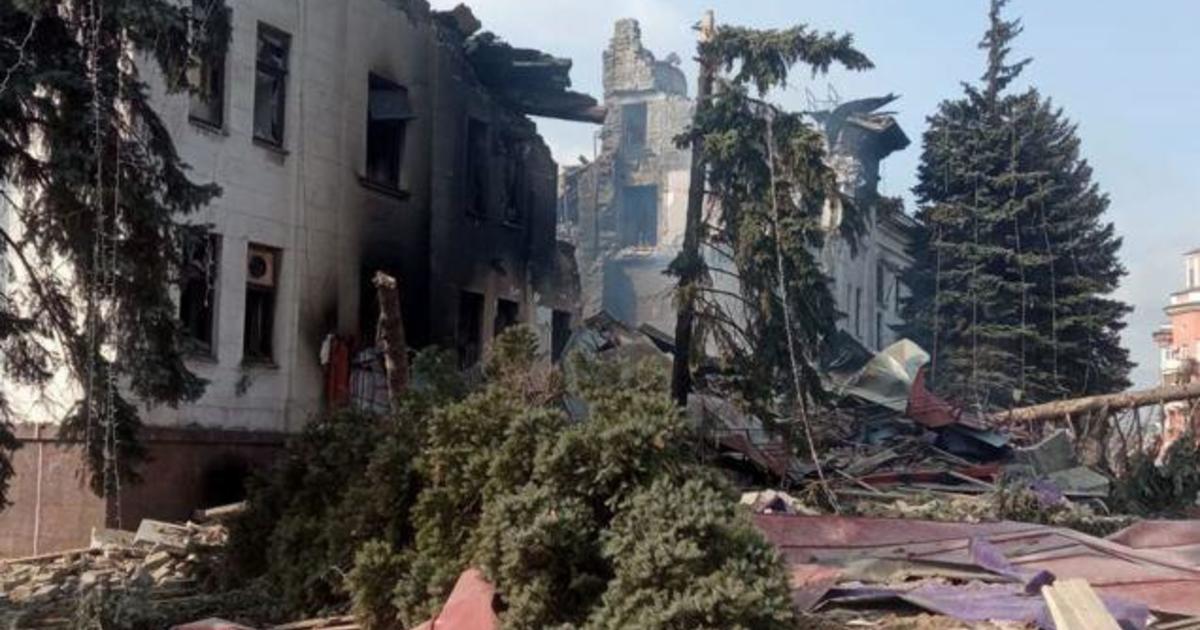 A Russian strike on a theater in the Ukrainian city of Mariupol earlier this month killed around 300 people, officials said Friday. It was believed that around 1,300 civilians were using the theater as a bomb shelter to escape Russia’s brutal, ongoing assault on the besieged city, according to Ukraine‘s human rights commissioner.

The word for “children” had been written in huge letters on the ground outside both ends of the theater so that it could be seen from planes overhead.

Russia denied striking the theater, repeating widely debunked claims that it has not targeted any civilian infrastructure in Ukraine and accusing Ukrainian “nationalists” of blowing the theater up as a provocation, without offering any evidence.

The United Nations said Friday that it was receiving mounting evidence of mass graves in Mariupol, including one that appeared to be holding about 200 victims of the war. Ukrainian officials estimate there are still roughly 100,000 civilians trapped in the city, where Russia’s siege cut off food, water, gas and electricity supplies weeks ago.

Some 10 million Ukrainians have been forced to flee their homes after just one month of war, with at least 3.5 million driven to seek safety in neighboring countries. More than half of them have crossed Ukraine’s western border into Poland, where President Joe Biden was paying a visit on Friday in a show of solidarity both with the refugees, and those helping them.

“With every day of our defense, we are getting closer to the peace that we need so much,” Ukrainian President Volodymyr Zelenskyy said in a Thursday evening address. “We can’t stop even for a minute, for every minute determines our fate, our future, whether we will live.”

CBS News senior foreign correspondent Holly Williams visited a Ukrainian military base and saw some of those defenses — and a group of new Ukrainian recruits getting ready to join the fight.

Lieutenant Miroslav Hai was a filmmaker and military reservist before Russia invaded his country, and said Ukrainians would continue defending their nation and their freedom no matter what, even if Putin uses nuclear weapons.

Officials told CBS News that recruits at the base receive only about a week of basic training before they are sent to the front lines. In the armory, they told Williams they were receiving weapons from NATO countries, but that they need more, as well as vehicles to move troops around.

Hai said he felt hatred when he thought of what Russia was doing to Ukraine.

“I think that we have little bit similar situation with Soviet Union and Afghanistan,” he told CBS News. “Afghanistan destroyed Soviet Union, and I hope that Ukraine will destroy Russian empire.”

Earlier this month, Ukrainian President Volodymyr Zelenskyy said 1,300 Ukrainian service members had been killed defending the country from Russia’s invasion. Analysts told the Washington Post that the true number of Ukrainian losses could be higher as well.

In some key areas around the capital, Ukrainian forces have reportedly managed to push Russian troops back. A Russian supply ship was destroyed on Thursday at a port not far from Mariupol, and Ukrainians were pushing to take back a town near Kyiv that was claimed by the Russian invaders.

But while Putin’s ground forces have been largely bogged down for weeks, particularly around Kyiv, they have continued to push against Ukraine’s defenders in the south and east. On Friday, officials said the northern city of Chernihiv — decimated after weeks of incessant shelling but still under Ukrainian control — had been completely cut off by Russian forces.

“The city has been conditionally, operationally surrounded by the enemy,” the regional governor said on television, adding that Chernihiv was still under fire from warplanes and artillery.