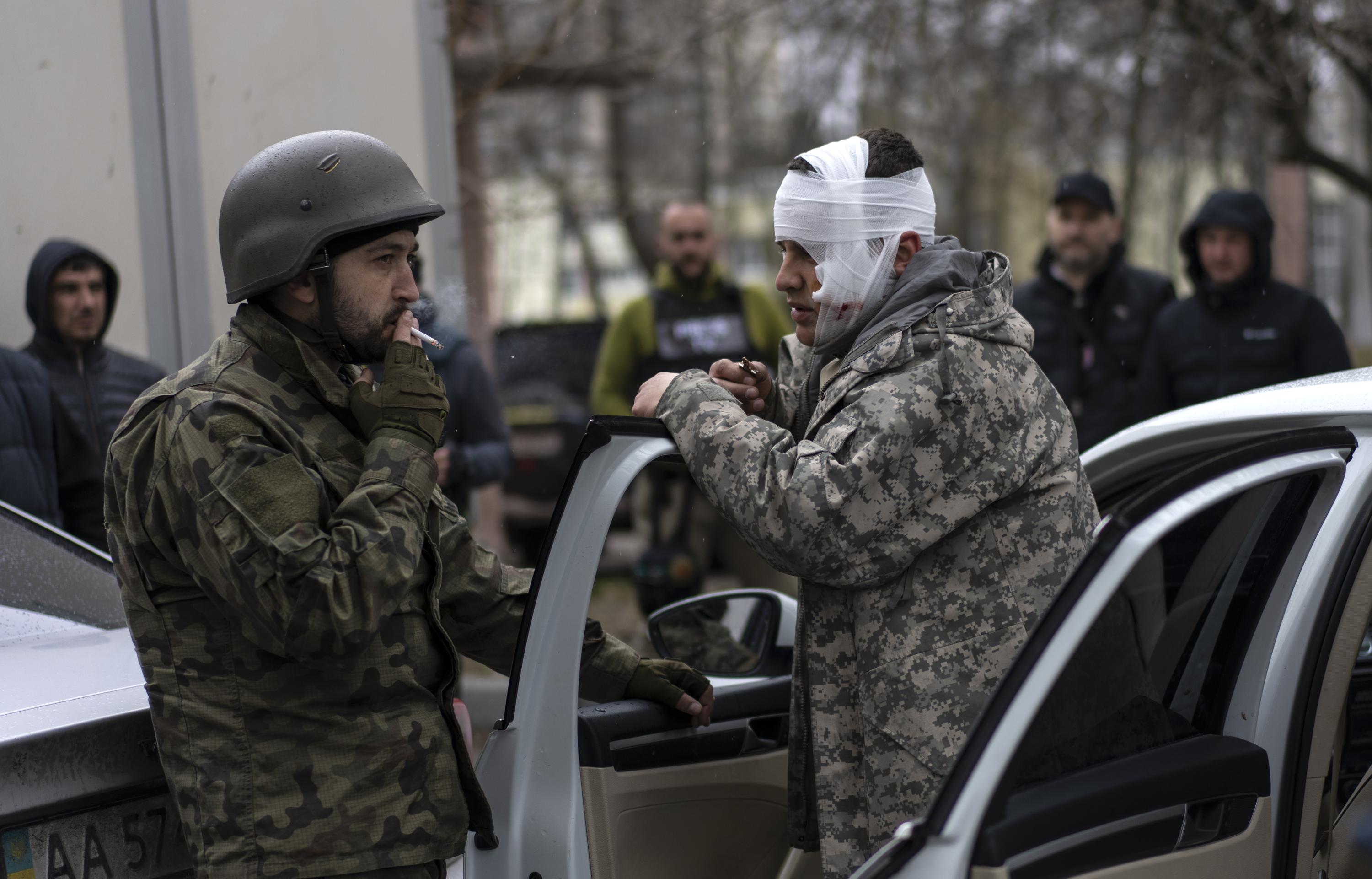 KYIV, Ukraine (AP) — The Ukrainian president said his country’s defense against the Russian invasion is at a “turning point” and again pressed the United States for more help in the hours after the Kremlin’s forces reneged on a pledge to scale back some of their operations.

Russian forces bombarded areas around Kyiv and the northern city of Chernihiv and intensified attacks in other parts of the country Wednesday, adding to already deep doubts about any progress toward ending the punishing war. Talks between Ukraine and Russia were set to resume Friday by video, according to the head of the Ukrainian delegation, David Arakhamia.

Meanwhile, a delegation of lawmakers from Ukraine’s parliament visited Washington to push the US for increased assistance, saying their nation needs more military equipment, more financial help and tougher sanctions against Russia.

“We need to kick Russian soldiers off our land, and for that we need all, all possible weapons,” Ukrainian parliament member Anastasia Radina said at a news conference at the Ukrainian Embassy.

Ukrainian President Volodymyr Zelenskyy made the case directly to US President Joe Biden.

“If we really are fighting for freedom and in defense of democracy together, then we have a right to demand help in this difficult turning point. Tanks, aircraft, artillery systems. Freedom should be armed no worse than tyranny,” Zelenskyy said in his nightly video address to the nation, which he delivered standing in the dark outside the dimly lit presidential offices in Kyiv. He thanked the US for an additional $500 million in aid that was announced Wednesday.

There seemed to be little faith that a resolution would emerge anytime soon between Russia and Ukraine, particularly after the Russian military’s about-face and its most recent attacks.

Russia said Tuesday that it would de-escalate operations near Kyiv and Chernihiv in order to “increase mutual trust and create conditions for further negotiations.” The announcement was met with suspicion from Zelenskyy and the West. And soon after, Ukrainian officials reported that Russian shelling hit homes, stores, libraries and other civilian sites in or near those areas.

Russian troops also stepped up their attacks on the Donbas region in the east and around the city of Izyum, which lies on a key route to the Donbas, after redeploying units from other areas, the Ukrainian side said.

Olexander Lomako, secretary of the Chernihiv city council, said the Russian announcement turned out to be “a complete lie.”

“At night they didn’t decrease, but vice versa increased the intensity of military action,” Lomako said.

Five weeks into the invasion that has left thousands dead on both sides, the number of Ukrainians fleeing the country topped a staggering 4 million, half of them children, according to the United Nations.

“I do not know if we can still believe the Russians,” Nikolay Nazarov, a refugee from Ukraine, said as he pushed his father’s wheelchair at a border crossing into Poland. “I think more escalation will occur in eastern Ukraine. That is why we cannot go back to Kharkiv.”

Zelenskyy said the continuing negotiations with Russia were only “words without specifics.”

“We know that this is not a withdrawal but the consequences of being driven out,” Zelenskyy said of Russia’s pledge. “But we also are seeing that Russia is now concentrating its forces for new strikes on Donbas, and we are preparing for this.”

Zelenskyy also said he had recalled Ukraine’s ambassadors to Georgia and Morocco, suggesting they had not done enough to persuade those countries to support Ukraine and punish Russia for the invasion.

“With all due respect, if there won’t be weapons, won’t be sanctions, won’t be restrictions for Russian business, then please look for other work,” he said.

—US intelligence officials have concluded that Russian President Vladimir Putin is being misinformed by his advisers about the poor performance of his military in Ukraine because they are too afraid to tell him the truth.

—The German government said it received assurances from Russia that European companies won’t have to pay for Russian gas in rubles. That prospect had raised fears that Russia could cut them off. Also, Poland announced steps to end all Russian oil imports by the end of the year.

— The UN is looking into allegations that some residents of the besieged and shattered southern city of Mariupol have been forcibly taken to areas controlled by Russian forces or to Russia itself.

At a round of talks held Tuesday in Istanbul, the faint outlines of a possible peace agreement seemed to emerge when the Ukrainian delegation offered a framework under which the country would declare itself neutral — dropping its bid to join NATO, as Moscow has long demanded — in return for security guarantees from a group of other nations.

But skepticism of statements from Russia by Zelenskyy and others seemed well-founded.

The US said that over the last 24 hours, Russia had begun to reposition less than 20% of its troops that had been arrayed around Kyiv.

Pentagon press secretary John Kirby said that troops from there and some other zones have begun moving largely to the north, and some have gone into Belarus. Kirby said it appears Russia intends to resupply them and send them back into Ukraine, but it is not clear where.

The Ukrainian military said some Russian airborne units were recorded in neighboring Belarus and were believed to have drawn from Ukraine.

In northern Ukraine, Russian forces took no offensive actions Wednesday, focusing on reconnaissance and logistics, the general staff said in a statement. But Russia is expected to increase attacks soon on Ukrainian forces to protect its own troops as they are repositioned, it said.

The Russians also are expected to try to blockade Chernihiv.

Top Russian military officials have said in recent days that their main goal now is the “liberation” of Donbas, the predominantly Russian-speaking industrial heartland where Moscow-backed separatists have been battling Ukrainian forces since 2014.

Some analysts have suggested that the focus on the Donbas and the pledge to de-escalate may merely be an effort to put a positive spin on reality: Moscow’s ground forces have been thwarted — and have taken heavy losses — in their bid to seize the capital and other cities.

Karmanau reported from Lviv, Ukraine. Associated Press journalists around the world contributed to this report.

Follow the AP’s coverage of the war at https://apnews.com/hub/russia-ukraine