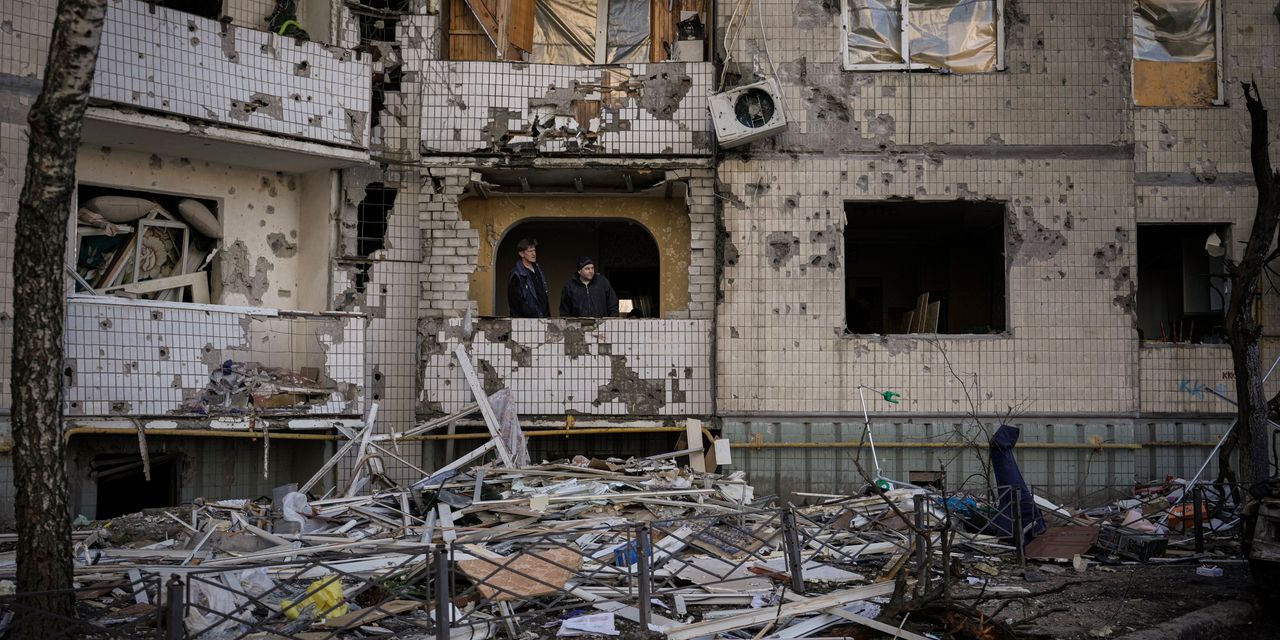 ZAPORIZHZHIA, Ukraine—As the battle for Mariupol intensifies, civilians fleeing the conflict told of escalating violence as Russian and Ukrainian forces fought street by street through the downtown of the historic port city and Russian airstrikes, artillery and mortar rounds have gutted entire neighborhoods.

Hundreds of people from Mariupol arrive here daily in a grim procession of cars, with shattered windscreens and shrapnel scars speaking to the ordeal endured by their passengers. Taped to the windows are homemade signs reading “children” in Russian, and strips of white material tied to the door handles, scant protection from the war raging over their city.

They pull into the parking lot of a hardware store on the outskirts of Zaporizhzhia—now a way station for people fleeing the city on their way to safety further west, or abroad—part of the more than 10 million people uprooted by the fighting. Nearly a month since Russia invaded Ukraine, it is on the verge of taking Mariupol in what would be the first major city to fall under its control. But Mariupol is a shattered prize.

“I can’t even describe it,” said Andriy, 37, who declined to give his full name and took his chances during a rare lull in the bombardment on Monday to flee Mariupol. Standing in the car park, he said his ears had yet to adjust to the absence of constant shelling in the city he left behind.

Mariupol has been a focus of the Russian offensive because it is a strategically important city linking Russian-controlled parts of eastern Ukraine with a swath of territory Moscow has captured in the south, and creating an arc containing much of the country’s Russian-speaking population.

The fighting around Mariupol has been under way since the opening days of Russia’s assault that began Feb. 24. The city has seen stepped-up levels of attack for about the past two weeks and as the battle moved closer to the city.

Ukrainian military officials said Tuesday that those defending the town were able to destroy a patrol boat operating close to the city and a radio complex.

The wider battle lines across Ukraine have shifted little in recent days, with forces on both sides digging in. Ukrainian forces said they were regaining ground in some areas. Russia’s Defense Ministry said Tuesday its troops had made progress battling for towns along its lines of attack.

Russian and Ukrainian negotiators have met repeatedly, with little apparent progress. Russia’s demands have included Kyiv relinquishing territory. Ukraine has said Russian troops needed to leave its country for any peace agreement to be reached.

Although Mariupol was always likely to be a target of Russia’s invasion, many residents stayed because they couldn’t believe the situation would get so bad. By the time they realized what was unfolding, it was too late.

The bombardment of the city of between 350,000 to 400,000 residents was growing heavier and closer by the day. Local officials say Russia has rained 50 to 100 bombs a day on Mariupol, destroying between 80% and 90% of the city. Ukraine rejected a Russian ultimatum to surrender the city this week.

Russian attacks flattened a maternity hospital in the city earlier this month. Attacks on a theater and an art school trapped hundreds of people sheltering there from the fighting, local officials have said. The total number of fatalities at the site remains uncertain.

More than a dozen residents who fled since last week described a desperate struggle to stay alive in a city where venturing outside meant exposure to being shot, shredded by artillery fire or obliterated in an airstrike. As the conflict intensified, residents weighed the risks of remaining in the city against the danger of attempting to flee under constant bombardment and through Russian checkpoints on the roads out of the city.

As residents realized they were being encircled, panic set in. Store shelves emptied. Bread grew scarce. Desperate residents broke into supermarkets to get food and take anything else they could carry home. At first, security forces tried to stop them, but soon gave up trying to maintain law and order, and even helped distribute food from looted shops.

Toward the end of February, the power was cut. On March 2, internet connection was lost, then the phone network, then cooking gas and running water.

From the window of their fifth floor apartment, Edgar Gevargian and his wife could see jets tearing through the sky overhead, and hear loud explosions. They decided to move to his parents’ house in another district of Mariupol where the shelling was less intense.

Days later, an explosive device landed a short distance from the house. A neighbor was blown apart when she was outside. Her husband collected the body parts. Mr. Gevargian and his wife left days later, joining a humanitarian convoy when the opportunity arose.

Ukrainian authorities said Tuesday they would continue working on evacuating people from Mariupol and surrounding areas hit by the advancing troops to the city of Zaporizhzhia, further northwest. Pickup points had been arranged in Mariupol and other points along the Sea of ​​Azov, said Deputy Prime Minister Iryna Vereshchuk.

“We will definitely not leave anyone behind and we will continue to evacuate every day on the same schedule until we take everyone out,” she said.

She said 21 buses and trucks with humanitarian aid had left Zaporizhzhia for Mariupol and that authorities were considering delivering additional fuel supplies to the nearby city of Berdyansk in order to allow people to refuel cars to escape.

For those caught in the city, the situation has been desperate at times. Women and children stayed largely underground, while men ventured out to scavenger for food, find water and search for a phone signal to find out what was going on. They collected snow off the roofs of cars to melt for drinking water. They cooked food on open fires in the yard, diving for cover at the whistle of incoming artillery.

Dmitro, 25, joined efforts with neighbors he had never met before the war to find wood and keep a fire burning from 6 am to 6 pm every day. On March 9, he was making tea on the fire when an airstrike hit the nearby maternity hospital in what has been one of the highest-profile attacks on civilians during the almost monthlong fighting. The shock wave lifted him off his feet. Since then, he said, the bombardment has been relentless.

As the bombing intensified, bases and bomb shelters filled up as people whose homes had been destroyed sought shelter in the shrinking area of ​​the city controlled by Ukrainian forces.

In the cold and dark of bases under the city, with no connection to the outside world, residents waited for a breakthrough. They had expected a formal evacuation to be organized, but as the days went by their hopes dimmed.

After Russian forces took control of the main intensive-care hospital, there was nowhere to treat the wounded, nor any medicine, people who fled the city say. The director of the heart disease center told Mykola Trofymenko he had been forced to amputate the mangled leg of a patient using a kitchen knife without anesthetic.

“The bombings and airstrikes and grad missile strikes were constant,” said Mr. Trofymenko, the head of Mariupol State University. “I have a Ph.D. in political science and I can’t understand how one country can do this to another.”

The university has been destroyed and Mr. Trofymenko doesn’t know whether his professors and students are alive. He has no word of his sister or grandmother either.

The city council dug says in the park for people to dispose of the dead, Mr. Trofymenko said, but most people buried bodies wherever they could, marking the graves with crosses made out of sticks. They used supermarket trolleys to move corpses strewn in the streets, said Dima Shvets.

On a notice board in a circus in Zaporizhzhia, now a hub for people displaced from Mariupol and other towns in the region, there are dozens of notices seeking information about missing people in the city.

—Thomas Grove contributed to this article.

Write to Isabel Coles at isabel.coles@wsj.com