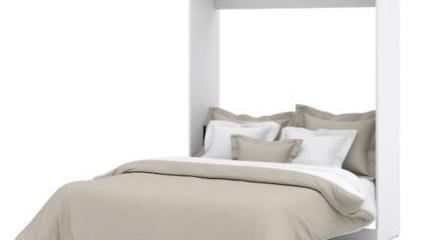 A queen size Bestar wall bed that is part of the recall.

About 129,000 wall beds sold online by Costco, Amazon and other retailers are being recalled after the furniture left one person dead and injuries were reported in 60 other incidents. The beds can detach from the wall and fall on people.

The US Consumer Product Safety Commission and furniture company Bestar announced the recall on Thursday. An additional 53,000 of the beds are being recalled in Canada.

A 79-year-old woman died in 2018 after a wall bed fell on her and injured her spine, according to the news release from the CPSC and manufacturer.

Others have reported bruising, among other injuries, after the beds detached or hit them, the release said.

Consumers should immediately stop using the beds, according to the release. Those who aren’t sure if their bed needs to be reinstalled can get a free inspection.