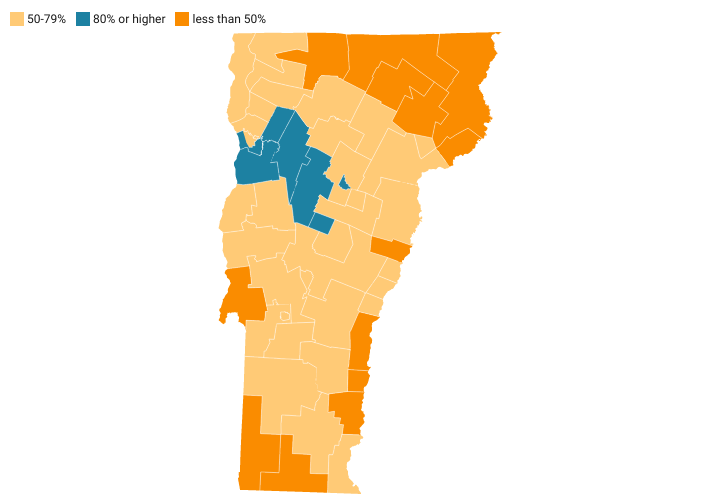 Since becoming eligible for Pfizer’s Covid-19 shot last November, 64% of Vermont public school students ages 5 and up have received two doses of the vaccine.

Vermont officials have touted that figure as a sign of success in the state’s Covid-19 vaccination push, which has made Vermont one of the most highly vaccinated states in the country.

“As you know, nationwide Vermont is a leader in delivering vaccines to children, particularly elementary-aged children,” Vermont Secretary of Education Dan French wrote to school superintendents in an April 1 email.

But newly released data shows significant regional disparities in how many schoolchildren have gotten the shot.

Late last month, the Vermont Department of Health released data showing the percentage of public school students ages 5 and up who have received at least two shots of the Pfizer Covid-19 vaccine.

School districts and supervisory unions are placed into one of three categories based on their vaccination rate: lower than 50%, between 50% and 79%, and 80% or above.

Most of the state’s districts have vaccination rates between 50% and 79%.

Only six districts—all of which are centered around Chittenden and Washington counties—have reached an 80% vaccination rate.

Meanwhile, a dozen districts and supervisory unions have vaccination rates at or below 50%.

Many of those districts and supervisory unions are in more rural, politically conservative parts of the state.

“It seems to be political,” Brooke Olsen-Farrell, the superintendent of the Slate Valley Unified Union School District, said in an email Monday. Slate Valley, which includes schools throughout western Rutland County, recorded a vaccination rate below 50%.

Some families “don’t believe COVID is a serious illness for children and that they seem to do fine if they contract COVID,” she said. “Some parents also believe that there may be long term side effects from the vaccinations and it isn’ t worth the risk right now.”

“I would guess that, whatever the trends are elsewhere and nationwide about why people don’t vaccinate, it’s probably similar to our area,” said Jen Botzojorns, the superintendent of the Kingdom East School District, which includes several towns in Caledonia and Essex counties.

Kingdom East reported a vaccination rate below 50%, even though the district has hosted vaccine clinics in schools and encouraged residents to get the shot.

“People have multiple and varied thoughts about it,” Botzojorns said in an interview. “It ranges from the stance of, ‘I just want to let nature run its course and not do something extra or different to my body’ to ‘I’m going to follow the science 100% because I believe in the research.’”

That stands in contrast to the Montpelier Roxbury School District, which boasts a vaccination rate over 80%.

“We have found considerable comfort knowing that our community has done as much as it can possibly do to keep each other and themselves safe,” Montpelier Roxbury School District superintendent Libby Bonesteel said in an email. “Our community follows and believes the science behind the vaccinations.”

The newly released data is drawn from the statewide Immunization Registry, a database containing Vermonters’ vaccination records, and school enrollment records from fall 2021.

Exact vaccination rates were not given for several reasons. Shifts in school and district enrollment since the beginning of the year affected the data’s accuracy, according to the Vermont Department of Health.

Discrepancies between records of student names and birth dates may also have complicated the data. And some students—like those in the Slate Valley district—received one or more Covid-19 vaccination shots outside the state, which could mean that their vaccination information was not available in the immunization registry.

Govt. Phil Scott’s administration has urged Vermont students to get the shots, even setting up a cash prize system for schools with high vaccination rates.

But officials do not plan to publish a school-by-school breakdown of vaccination rates, according to Ted Fisher, a spokesperson for the Agency of Education, who cited “federal privacy requirements and Vermont’s many small schools.” The state also does not plan to release data for independent schools.

Fisher said he did not want to speculate about publishing data for students’ booster shots.

“Currently we do not plan to update the data,” Fisher said. “It was built to aid policy discussions taking place at the local and state levels as we look towards recovery.”

Sign up for our guide to the global coronavirus outbreak and its impact on Vermont, with latest developments delivered to your inbox.

Did you know VTDigger is a nonprofit?

Our journalism is made possible by member donations. If you value what we do, please contribute and help keep this vital resource accessible to all.