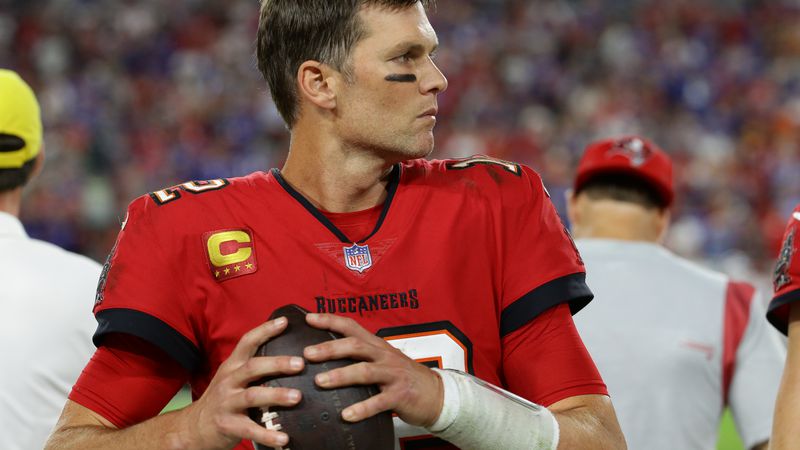 TAMPA — His competitive fire wasn’t extinguished by the sips of champagne from all the toasts to his career, which ended awkwardly only six weeks earlier. Instead, 44-year-old retiree Tom Brady sounded as if he were preparing for a game when he telephoned Bucs quarterbacks coach Clyde Christensen.

“It felt like the morning after we had just lost to the Rams,” Christensen said of Brady’s phone call last Sunday, six weeks after the Bucs’ loss to the eventual Super Bowl 56 champions.

“He had a list. He said, ‘Here’s how we can be better.’ I think he had been out of retirement 12 hours or so by then. The first thing he said was he didn’t want to go out that way. He wanted to make sure we do everything to win it all next year.”

Christensen said he was unsure if there was a tipping point that caused Brady to return to the Bucs for the 2022 season.

The stat line for Brady’s last season is what made retirement seem so unlikely in the first place. He was signed through 2022.

Brady led the NFL with 5,316 passing yards and 43 touchdowns last season. No quarterback had accomplished as much as Brady with his seven Super Bowl wins, three NFL Most Valuable Player awards, five Super Bowl MVPs and 15 Pro Bowls.

He led the Bucs to 29 wins and a Super Bowl 55 victory in two seasons in Tampa Bay. Brady apparently had decided to leave the NFL while still at the top of his game.

The retirement announcement was mishandled, and Brady’s father, Tom Sr., has said his son felt pressured by media reports to announce a decision.

The Bucs played it perfectly, alternately celebrating Brady’s remarkable career while keeping the channels of communication open with him. They also had to go about the business of making plans to replace him, either through free agency or a possible trade with the Texans for Deshaun Watson.

Brady’s close relationship with the Glazer family, who own the Bucs, and general manager Jason Licht as well as respect for head coach Bruce Arians and his staff played a significant role in the path back.

The timing, however, wasn’t coincidental. He announced he was coming back on the eve of the free-agent negotiating period. Brady knew his decision would have a positive impact on retaining players.

Stay updated on the Buccaneers

We’ll deliver a roundup of news and commentary on the Tampa Bay Buccaneers weekly during the season.

You’re all signed up!

Want more of our free, weekly newsletters in your inbox? Let’s get started.

Explore all your options

“I do think probably with coming back so quick was him trying to beat free agency so you can assemble a team around him,” Christensen said. “So you had a chance.”

From the time he announced his retirement on Feb. 1, there was much speculation and a few conspiracy theories about Brady’s true intentions.

It includes one plausible scenario in which Brady was set to join the Miami Dolphins as a minority owner while teaming with Sean Payton, who would become head coach. National reports said those plans came apart because the Dolphins were denied permission to interview Payton. And on the same day Brady announced his retirement, former Miami head coach Brian Flores filed a lawsuit against the NFL, citing racial discrimination.

Regardless of his reasoning, Brady’s retirement always felt a little off. It felt odd to Christensen that the most detailed quarterback in league history had not taken any time to step away from the game before making such a monumental decision to end his career after 22 seasons.

“That’s what was so surprising about him announcing so quickly,” Christensen said. “That’s not what they usually do. They know they’re tired, they’re physically beat up. They usually wait for a month or two. Wait and then decide.

“It was kind of weird. A little bit out of character for him.”

About 21 hours later, ESPN’s Adam Schefter and Jeff Darlington followed that report with one of their own that was even more definitive. Networks immediately began playing highlights of Brady’s career and interviewing former teammates and coaches.

On Jan. 31, Brady went on his Let’s Go! podcast and told host Jim Gray that he had not made a decision about his future.

“I’ll know when the time is right,” he told Gray. “…I know there’s a lot of interest in when I’m going to stop playing and I understand that. It’s not that I don’t recognize that. It’s just I know when I’ll know, and when I don’t know, I don’t know. I’m not going to race to some conclusion on that.”

But the conclusion came 14 hours later.

In a reflective letter he posted on social media, Brady cited his desire to spend more time with his wife, supermodel Gisele Bündchen, and three children as the primary reason for ending his career.

“This is difficult for me to write, but here it goes: I am not going to make that competitive commitment anymore. I have loved my NFL career, and now it is time to focus my time and energy on other things that require my attention.”

Just a week earlier, Payton resigned his head coaching position with the Saints.

While speaking to reporters March 2 at the NFL scouting combine in Indianapolis, Dolphins general manager Chris Grier admitted they had called the Saints about Payton but were denied a chance to talk with him. He did not address Brady as a possible owner, only said there was no interest in him as a player.

There are more than a few dots that Pro Football Talk‘s Mike Florio has tried to connect with respect to Brady and some role with the Dolphins.

The connection, Florio says, arises from Brady’s friendship with Bruce Beal, described as a “significant limited partner with the Dolphins who is poised to purchase the team” from owner Stephen Ross, the University of Michigan’s most prolific donor.

Ross is under investigation by the league after Flores alleged Ross encouraged him to lose games in 2019 by offering him $100,000 per loss.

“They were planning to go after both (Brady and Payton) and the Flores lawsuit resulted in them pulling the plug on it,” Florio told the NFL Network’s Rich Eisen. Florio said multiple Dolphins sources confirmed their interest in Payton and “with Brady, all the Dolphins sources would acknowledge is there has been discussions about him becoming a minority owner.”

Brady and Payton are friends and are represented by agent Donald Yee, who did not respond to requests for comment about this story.

Brady and Bündchen reportedly bought a 5,772-square-foot plot of land for $17 million on Biscayne Bay — an area nicknamed “Billionaire Bunker” thanks to affluent residents like Ivanka Trump and Jared Kushner — with views of the Miami skyline. They are building an eco-friendly mansion in place of the original house.

The Glazers, Licht and Arians

There’s no question playing two years with the Bucs has been good for Brady and his brand. In addition to winning a seventh Super Bowl, he got the control he lacked in New England playing for Bill Belichick. In short, there’s virtually nothing Brady has asked for that the Bucs have denied.

They traded for tight end Rob Gronkowski, claimed running back Leonard Fournette, signed troubled receiver Antonio Brown — twice. They welcomed Alex Guerrero, the personal trainer for Brady and co-founder of TB12, into the AdventHealth Training Center to work with all their players.

Licht, who was with New England when Brady was drafted No. 199 out of Michigan in 2000, often talks about his special bond with the greatest quarterback of all time.

But since Brady’s retirement, there had been a steady stream of stories suggesting Brady’s relationship with Arians had soured.

Arians has vehemently denied this.

“It seems like there’s one (story) every day now,” Arians told the Tampa Bay Times last month. “Everybody is speculating he’s going somewhere else. That don’t bother me. This other bulls–t, the relationship thing, that’s so far-fetched.”

Nevertheless, while Licht said they would “leave the light on” for Brady, Arians vowed to not trade his rights. “Nope. Bad business,” he said.

Last Saturday, whether it was coincidence or calculated, Brady attended a Manchester United match against Tottenham Hotspur. He sat with the Glazer family, who own both the Bucs and Manchester U. Cristiano Ronaldo, the Tom Brady of soccer, had three goals and later asked Brady if he was done playing. Brady scrunched his face and appeared unsure.

Whether Brady was there to inform the Glazers of his decision to return remains unclear, but by 7:15 the next evening, he was back with the Bucs to play his 23rd NFL season.

“These past two months I’ve realized my place is still on the field and not in the stands. That time will come. But it’s not now. I love my teammates, and I love my supportive family. They make it all possible. … Unfinished business.”

Christensen has every reason to believe Brady will excel this season.

“I think he will play really, really well again and a lot of it will depend on who is in the surrounding cast,” Christensen said.

But Brady has a plan. He’s ready to roll.

“He has a great vision of where he sees this thing going,” Christensen said.

Perhaps all the way to Super Bowl 57.